Richard, 62, and his Good Morning Britain co-host Kate Garraway, 51, were joined on the show by protest organiser Dr Bradbrook and former Hunted star and police officer Peter Bleksley to discuss the actions of protestors, with reports buildings had been graffiti’d and windows being smashed.

The current protests are taking place in central London in locations near Marble Arch and Oxford Street, causing major disruption to commuters trying to get to work.

Whereas Peter was on hand to provide advice to protestors that they shouldn’t break the law when it comes to voicing their views, Dr Bradbrook admitted to the ITV presenters she was there to raise awareness of the cause behind the protest.

However, when she began speaking after Peter’s initial comment, host Richard cut her off as he became seemingly frustrated she was giving a “ mission statement” rather than addressing the issue of the actions of protestors. 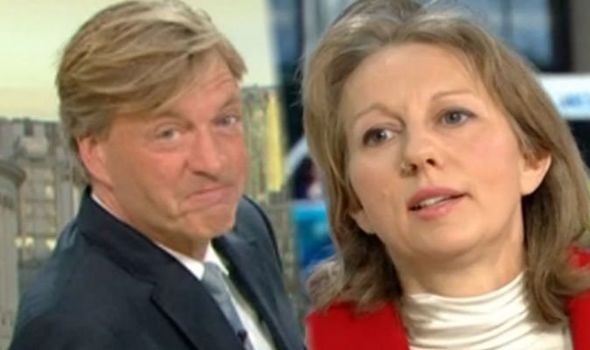 Can we spare the mission statement

As Dr Bradbrook began her response to Peter’s comments on the protest, Richard suddenly jumped in to get the activist to explain how the actions of the protestors would help the cause she was fighting for.

Richard suddenly snapped: “Can we spare the mission statement,” before telling the protest organiser: “We’re not here to have a big debate about global warming.”

Referring to the disruption the protests are causing to commuters, Richard went on to ask Dr Bradbrook: “How does it further your cause to stop people getting to work? How does that advance your case?”

“Emissions are decreasing in such a tiny way in the UK. We are not tackling this crisis. I do want people to understand the situation that we’re in, this is absolutely unprecedented.”

However, Richard went on to ask the guest to give clarification on her motives once more, asking Dr Bradbrook: “So, you’re making an attempt to grab publicity? You’re being totally honest about that,” to which the guest replied: “That’s part of the process.”