Kathryn Dennis is Instagram official with her boyfriend, Chleb Ravenell. The two sparked rumors this summer when she was spotted getting cozy with him.

The new relationship confirmation comes just one week ahead of the Season 7 Southern Charm debut. Kathryn is one of the originals returning after many other female cast members chose to walk away.

How long have Chleb Ravenell and Kathryn Dennis been together?

Back in July, the two sparked rumors when they were seen together in various Instagram photos. She had remained silent for the most part as she was dealing with other things happening in her life.

Whether Chleb Ravenell will appear alongside Kathryn Dennis on Southern Charm remains to be seen. The two went Instagram official recently, but it is suspected they have been together since July. That means they’ve been dating for roughly three months, give or take a few weeks.

His Instagram doesn’t boast any photos of the Southern Charm beauty, but he is followed by former cast member, Naomie Olindo. As for her Instagram, she only has one photo of the two together. Her other posts feature her professional photoshoots and her two children, Kensie and Saint. 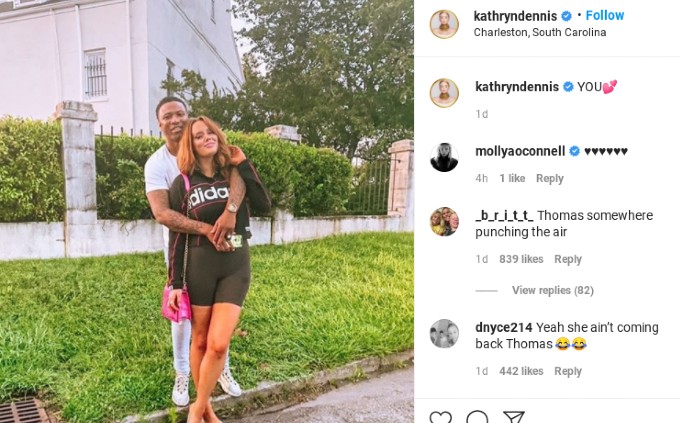 Will Chleb Ravenell appear on Southern Charm with Kathryn Dennis?

Based on the timeline of their relationship, it is unlikely that he will appear on the show. While it is unclear how long filming ran due to the pandemic shutting down production, it is likely that the filming was done by the cast members as it has been for several other shows.

During one point during the filming, Kathryn Dennis was staying in Thomas Ravenel’s guest house. He confirmed that he filmed a segment with her and the kids recently, revealing that he would be appearing on Season 7.

It is ironic that her children’s father and new boyfriend share a similar last name, with just one extra l being tacked on to the end of her new man’s name. Chleb appears to be less known than some of the other men Kathryn dated following her final split from Thomas in 2016.

Going public with Chleb was a big deal. Kathryn Dennis has been keeping her love life away from the public since her split with Hunter Price over a year ago.

She has had some difficult things in her relationships happen on camera and perhaps she is choosing to be pickier about who she films with going forward.