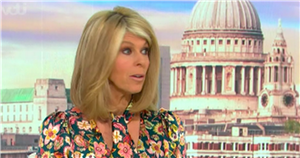 Weather girl Laura Tobin confessed to having a cardboard cut-out of her co-star Ben Shephard at home.

The Good Morning Britain meteorologist made the shocking admission as things in the studio turned tense after Andi Peters had drawn-up a poster of Ben – poking fun of his "grey hair".

The fake advertisement read: "Just For Ben," and appeared to include an endorsement from Philip Schofield: "'I used to use it… then I stopped.' – Phillip Schofield."

The competition presenter, 51, had returned the poster to the studio and host Kate Garraway and Laura were busy swooning over the image of Ben with completely white hair.

Kate told Ben: "I love the picture of you as the old silver fox.

"Is that the vision into your future?"

She added: "You're going to be super handsome when it all goes grey."

Disagreeing, Ben responded: "I look like I've got some trapped wind as well."

He replied: "I will sign it and maybe we can put it up for charity somewhere?"

"Oh, I thought it was for me," said the weather expert.

Before adding: "No, you can't have it on your wall, you've already got that cut-out."

The confession sent Kate into hysterics as she laughed: "That's going to need a brief explanation I feel."

"No, no not needed, not needed," interjected Laura, brushing off the conversation as Ben swiftly moved on with the programme.

Earlier on in the show, competition presenter Andi Peters fuelled the conversation about Ben's hair when he turned up on air with a mocking picture of Ben.

Andi joked: "I do feel a little bit bad that I did speak about the greys in your hair yesterday but you know me I have to turn everything into a money making scheme."

"Think it's already had an endorsement from Phillip Schofield."

The news anchorman was left speechless but had the last laugh after he banished Andi from venturing into the studio – leaving him outside in the rain.

GMB airs weekdays at 6am on ITV.