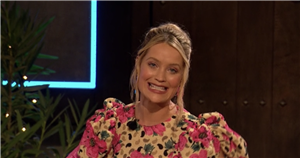 Love Island fans have transformed into amateur detectives just before the 2021 final – and they’ve worked out there must be more to the Jiberty drama than first meets the eye.

Liberty Poole and Jake Cornish announced their intentions to quit the villa after the spark disappeared from their relationship, with Liberty insisting she had to "stay true to herself".

During an appearance on Love Island: Aftersun, fans had their magnifying glasses at the ready, as they noticed host Laura Whitmore brutally cutting off Jake as he began to lift the lid on some of the drama.

It came as Jake and Lib both appeared on the chat show together to chat about their sudden exit, turning to answer a fan tweet that asked: "Was there a lot of pressure being the only couple that were together from the start? And did you find the need to stick together even though feelings of doubt started earlier on?"

Liberty responded: "No, I feel like for me, Jake was the only person in there that I liked and had that connection with.

"Obviously what we had at the start was so strong, no matter if I spoke to other people, it just didn’t compare so I was being true to myself by sticking with Jake."

As Laura turned to Jake, he said: "Like I said, when I had this ‘non-touch’ ban rubbish for a couple of days, I had a chat with Millie and it just wasn’t the same. I know when I know, early on with Lib-"

But Laura quickly cut him off as she thanked the pair for appearing on the show, explaining: "Actually, I can’t believe it, we’re actually out of time for tonight. I could sit here and chat with you all day – and all night!"

The show drew abruptly to a close – leaving fans wondering what was going on.

And many are sure there’s more to the ’touch ban’ than first meets the eye.

One baffled viewer penned: "Did no one else hear Jake talk about a 'no touching period' with Liberty before Laura cut him off and the show ended? #LoveIsland."

And another followed up: "We did not get shown this ‘no touching ban’ Liberty gave Jake when he was saying he wanted to get to know Millie? Because I have no memory of any of that."

Someone else replied: "I heard that, what does he mean?"

And another eagle-eyed viewer quickly typed: "I think the show are hiding something here…"

Jake appeared to be referring to Liberty refusing to get close to him after he announced his intention to get to know Millie Court when she entered the villa as a bombshell.

Lib was put off by the move, and reluctant to cuddle with Jake as much as he wanted to – though they later made things official and became boyfriend and girlfriend.

It later emerged that Hugo Hammond had taken the opportunity to get to know Liberty more intimately during this period – though the scenes were never aired.

Posting to his TikTok account, Hugo could be seen standing by a window while Adele’s hit Rolling in the Deep played over the clip.

He included the caption: "When Lib pulls you for chats after Jakey wanted to get to know Millie but the show didn’t air it to protect ‘Jiberty’ and now this happens.

"Imagine what could have been."

He clarified: "I don’t actually know why it never got aired. But this is my assumption."

Lucinda Strafford also got in on the gossip, asking Hugo: "She was exploring her options, wasn’t she?"

Love Island continues tonight at 9pm on ITV2 and ITVHub.