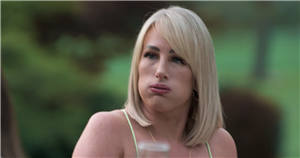 Married At First Sight UK fans were left stunned on Thursday as Morag decided to tell Amy that her partner Josh had messaged her last year.

Morag, who is coupled up with Luke, told Amy in front of their fellow co-stars: "I'm really sorry, there's something I'm going to have to bring up today.

Morag continued: "However… last year, Josh may have added me. Sent me a message, multiple times, liked multiple of my photos."

To which a confused Amy replied: "Blondes aren't even his type though?"

Morag responded with: "I'm sorry, I didn't mention it, I didn't want you to be worried… I told Luke from the off, however, has Josh mentioned it to you? Has he been transparent, honest?"

Amy remained silent, stunned by the revelation, as their other co-stars commented: "Wow!"

Continuing, Morag said: "I genuinely feel like he messaged a lot of girls. I just happened to be one of them!"

Speaking away from her co-stars after the revelation, Amy said: "Obviously, things needed to be aired… I feel like every time we're good, someone tries to put a spanner in the works.

"It's really getting to me now, everyone needs to stop interfering in our relationship. Hopefully this is the last we are going to hear from it!"

Viewers were left baffled as to why Morag decided to bring the past interaction up, especially as it happened before the show and when Josh was single.

One person said: "I don’t understand why it matters if Josh messaged Morag!! He was single #MAFSUK #MarriedAtFirstSightuk."

A different account put: "I’m genuinely baffled why morag felt the need to say that?! Like ok darling, and he’s married me sooooo?#MAFSUK."

Another viewer questioned: "Why has Morag made a big thing about that? Or even mentioned it? I don’t get it #MAFSUK."

A different show watcher said: "Why did Morag feel that was necessary to say?… #MAFSUK."

While another fan added: "Not sure why Morag needed to make such a big deal over that #MAFSUK."

And things look set for even more drama in the next episode as a spoiler clip sees Morag burst into tears as Luke says he is "falling in love" with her while Amy appears to have a blazing row with Josh as she storms off.

Married At First Sight UK runs Monday to Thursday nights at 9pm on E4. Catch up on the series so far on All 4.

For more juicy gossip on your favourite stars, Married at First Sight UK and the couples,sign up to our daily newsletter here.