Mo, 37, has become a prominent member of the I’m A Celebrity…Get Me Out Of Here! camp alongside his fellow cast member and BBC Radio One presenter, Jordan, 30. These two and 10 other celebrities have had to get used to carrying out a daily routine within the confines of Gwrych Castle, including grooming. However, when the Yorkshire-born campmate decided to shake things up a bit with his appearance on the ITV reality show, the Olympian made a cheeky dig at his co-star’s new facial hair.

Having been in the camp for a week and a half now, the radio presenter thought it was time for him to undergo a shave.

Speaking in the Telegraph, Jordan said: “I know my mum and grandma will be watching it going, ‘You could have had a shave, you scruffy sod!’”

Deciding to have a bit of fun, the contestant asked his fellow campmates to close their eyes before he came back into the castle.

When they finally opened their eyes, the cast of all-stars saw their former camp leader sporting a goatee, a look which Mo had been displaying since the series began.

Joking around, the broadcaster told his new group of friends he was a new member of the line-up called Jeff. 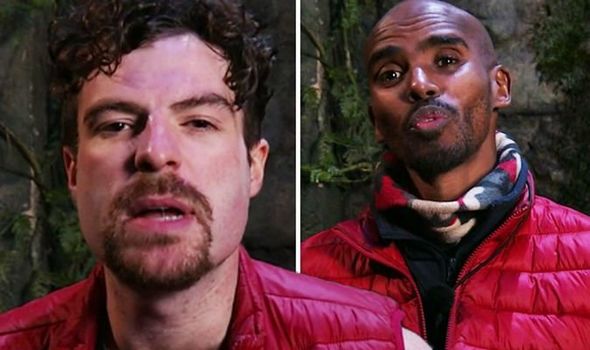 After having some fun, the radio presenter went to remove the rest of his facial hair, but Mo had a few words to say about it.

In the Telegraph, the Olympian joked as he hit back at his co-star’s new look: “There’s only room for one goatee and that’s mine.”

The marathon runner’s place as the only man with a goatee in the castle was reinstated when Jordan emerged from the bathroom completely clean-shaven.

Speaking ahead of his stint on the reality show, the Yorkshire-born contestant revealed he had undergone some more extreme forms of grooming to look ship-shape.

There’s only room for one goatee

Recorded for his Help I Sexted My Boss podcast, the radio presenter explained: “I decided that because I’m going on national telly, I needed to get my back and chest waxed.

“And it was the most painful things of my life. I don’t want to look hairy and horrible on I’m A Celebrity!”

It’s not just the battle of the goatees which both Jordan and his co-star Mo are apart of as they are both in the running to become King of the Castle.

Although the final is still a few weeks away, bookmakers are already surmising who could become champion of the first-ever UK series.

According to the latest odds from Coral bookmakers, the radio presenter stands at 8/11 to leave the castle victorious.

Coral spokesperson Harry Aitkenhead said of the early indications for champion: “Jordan is beginning to run away with the crown.

“We now make him odds on to be crowned King of the Castle at the end of the 2020 series of I’m a Celeb,” he continued.

Mo sits just behind them at 10/1 but with a couple of weeks to go, the odds tables could change completely.

On the other end of the spectrum, it seems Hollie Arnold, 36, is the favourite to make an early exit from the competition.

The Paralympian’s chances of winning currently stand at 1000/1, making her the clear outsider to become champion and Queen of the Castle.

It has not yet been revealed when the first elimination of the series will take place but it has been reported the show will come to an end in early December.

I’m A Celebrity…Get Me Out Of Here! continues Thursday at 9pm on ITV.