PHILLIP Schofield got merry early on Sunday morning as he filmed the Christmas special of How To Spend It Well.

The This Morning host took his fans behind the scenes of the popular show to give them a glimpse of his gruelling work involving drinking cocktails and eating truffles. 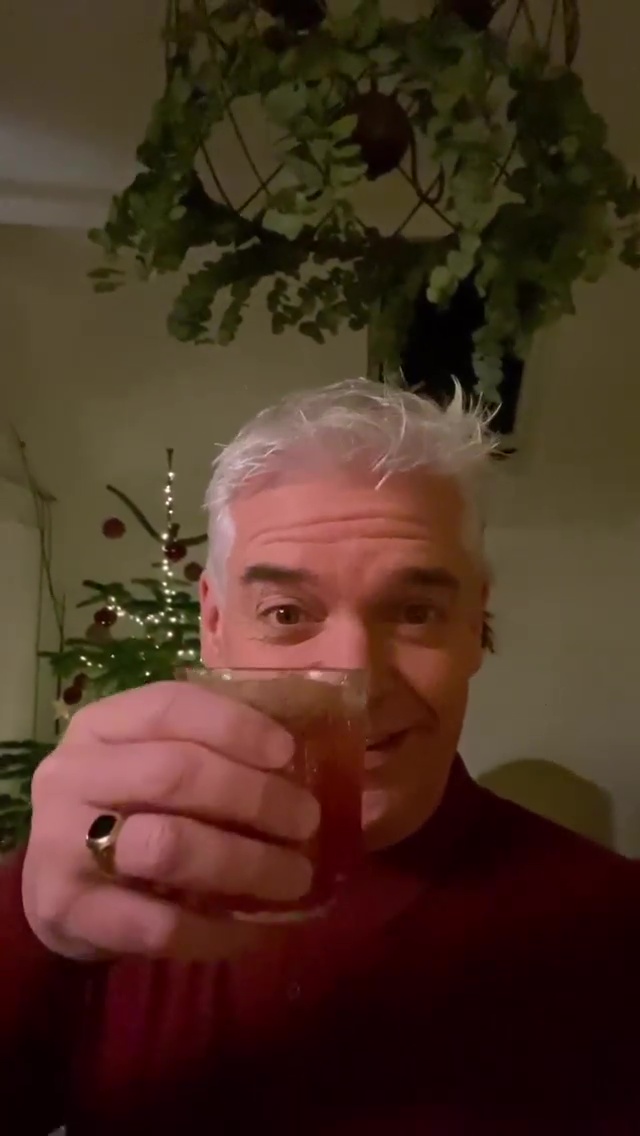 The show sees the 58-year-old offering the essential guide on what gifts and gadgets to buy this festive season – and how to get the most from your money for all the other trimmings such as food, decorations and toys.

Phillip took to his Instagram Stories at 8.30am looking a bit sleepy before explaining he was on set of the show.

"It is very early in the morning… last day of filming for How to Spend It with the team here," Phillip said as he panned up behind him to show the crew waving at the camera while wearing face masks.

Next Phillip was inside a home decked out in Christmas decorations as he stood in front of a minimal festive tree as he sipped on the yummy drink. 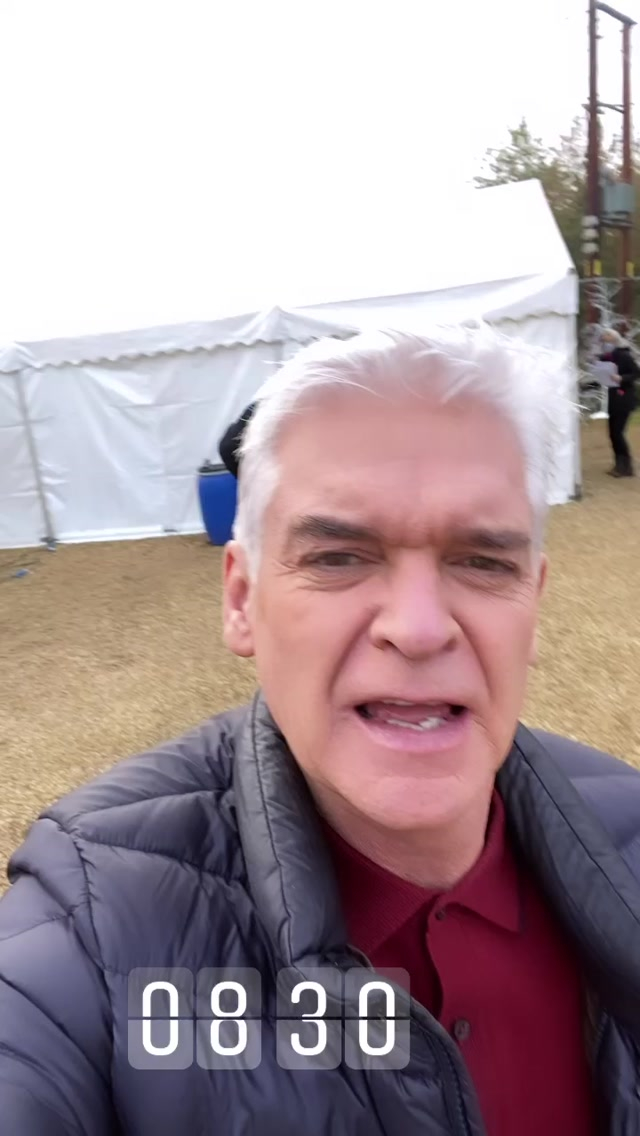 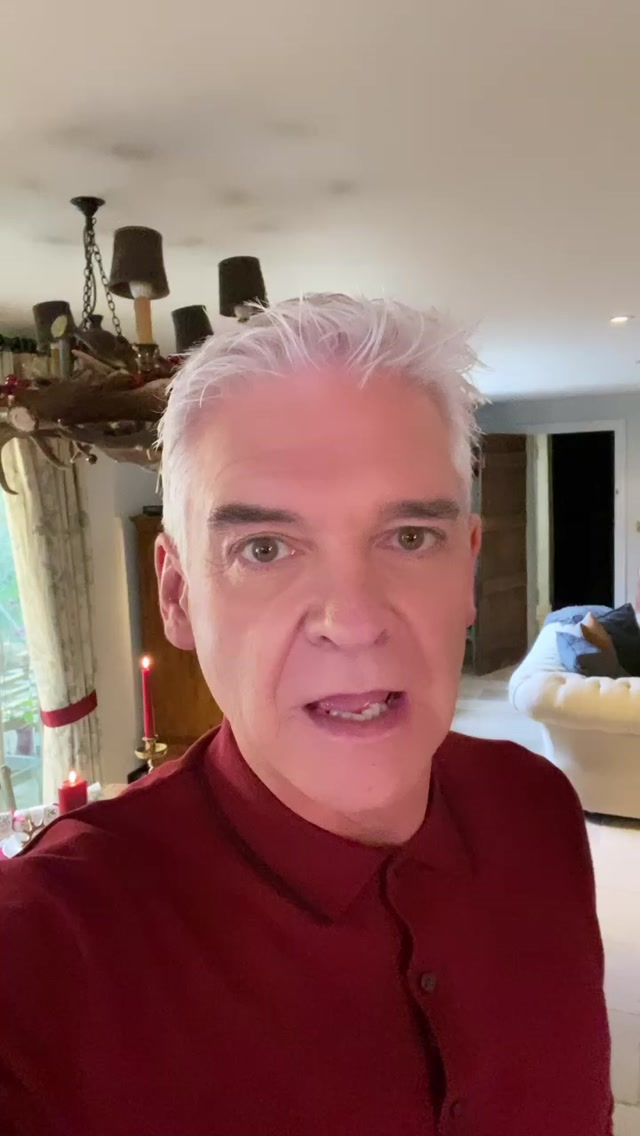 "First shot of the day, a whiskey sour. It's a tough job but someone's got to do it," he giggled on his stories.

That wasn't where the luxury stopped as Phillip let his fans in on the wide array of truffles that he would get to sample after filming.

"There are things we do on the show that are right up my alley," he explained as his picked up an Alba white truffle to sniff.

Known for a delicate floral note and strong aroma, the truffles are worth about £150 for 30 grams. 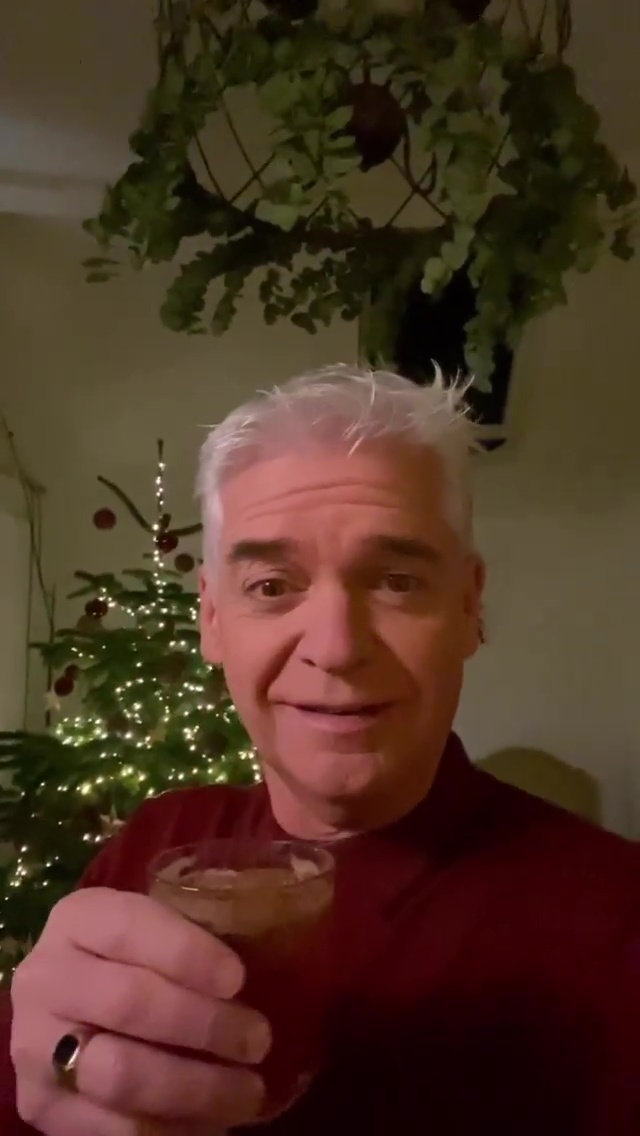 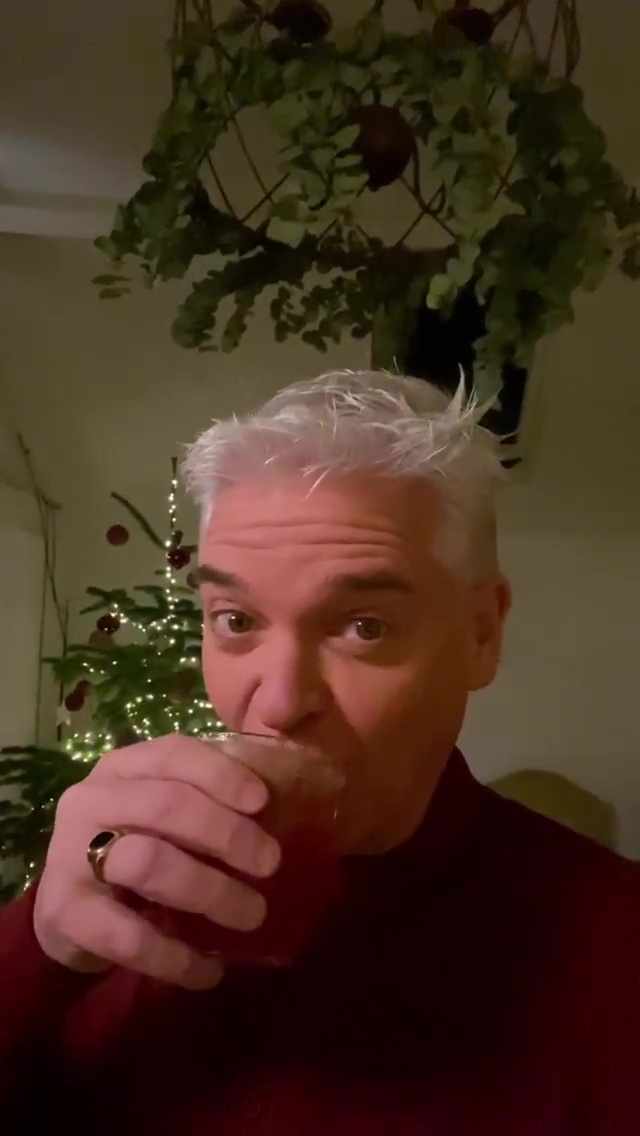 "Look at all this truffle malarkey we've got going on," he said as he showed his 3.2million followers the range of truffles and truffle products on set.

In order to return to the show, the presenters and cast had to take coronavirus tests to make sure they were ok to be on set.

Phillip was left grimacing as he filmed his coronavirus test before shooting the latest installment of How To Spend It Well At Christmas.

With the ongoing coronavirus pandemic, TV and film sets are taking the upmost precautions to shoot with all carrying out Covid tests with their cast and crew. 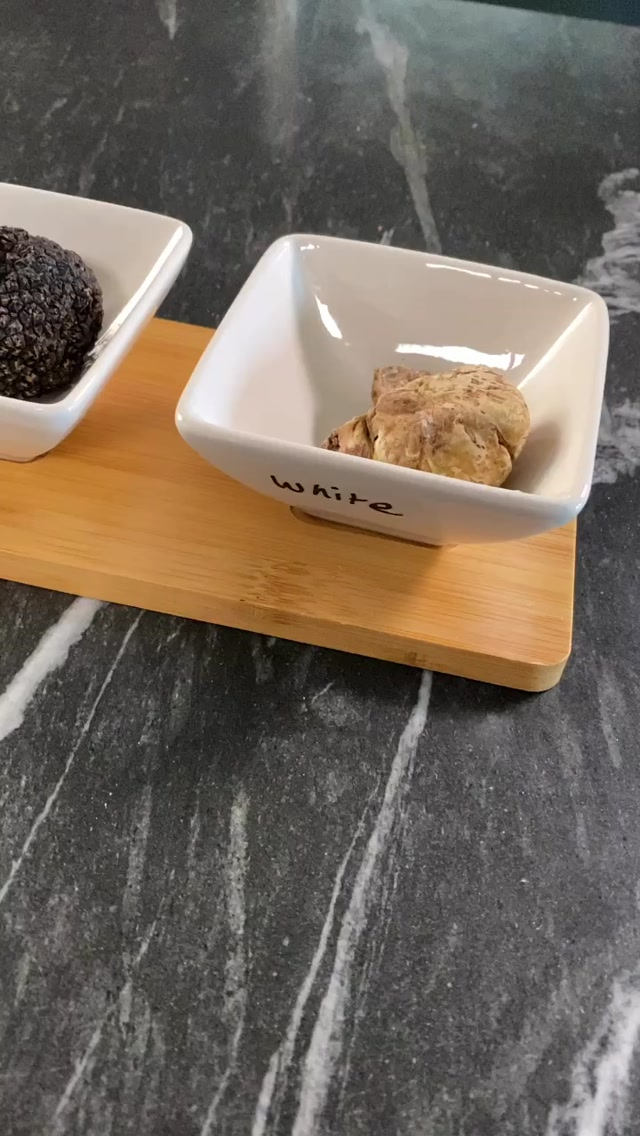 Abiding by the guidelines, Phil undertook a test ahead of his How To Spend It Well At Christmas shoot and shared the experience on his Instagram Stories yesterday.

The ITV presenter was clad in a black padded jacket as he spoke to his followers before the test began and said: "Get ready".

Phil then grimaced in the clip he captioned, "Keeping #Howtospendit safe" as a health professional carried out the first step – swabbing his throat.

After the first step was quickly complete, the This Morning star said: "That's horrible" before the healthcare worker started the second part of the test. 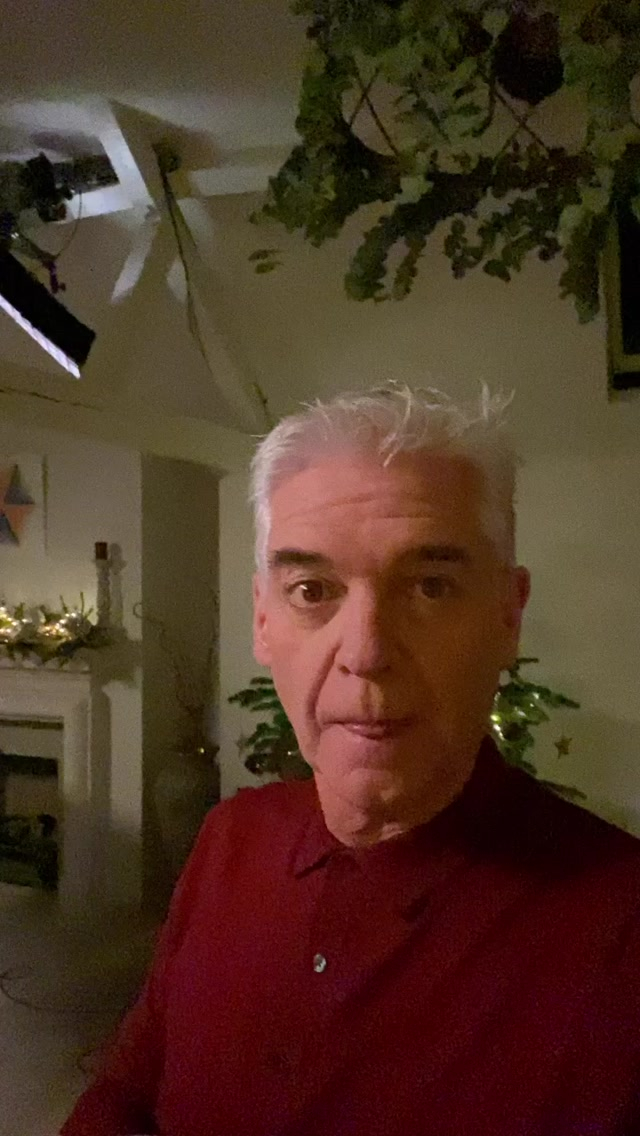 As she placed a swab up his nostril, Phil's eyes began to water and he started to cough as the health professional then swabbed his second nostril.

The TV star cheekily captioned the final clip: "All for a festive show. Merry fecking Christmas".

In March, Phil's travel show How To Spend It Well On Holiday was pulled from ITV's schedules as the coronavirus threw global travel into chaos.

The channel admitted it had postponed the programme, which was due to start on March 5 – but replaced it with another travel show starring Griff Rhys Jones. 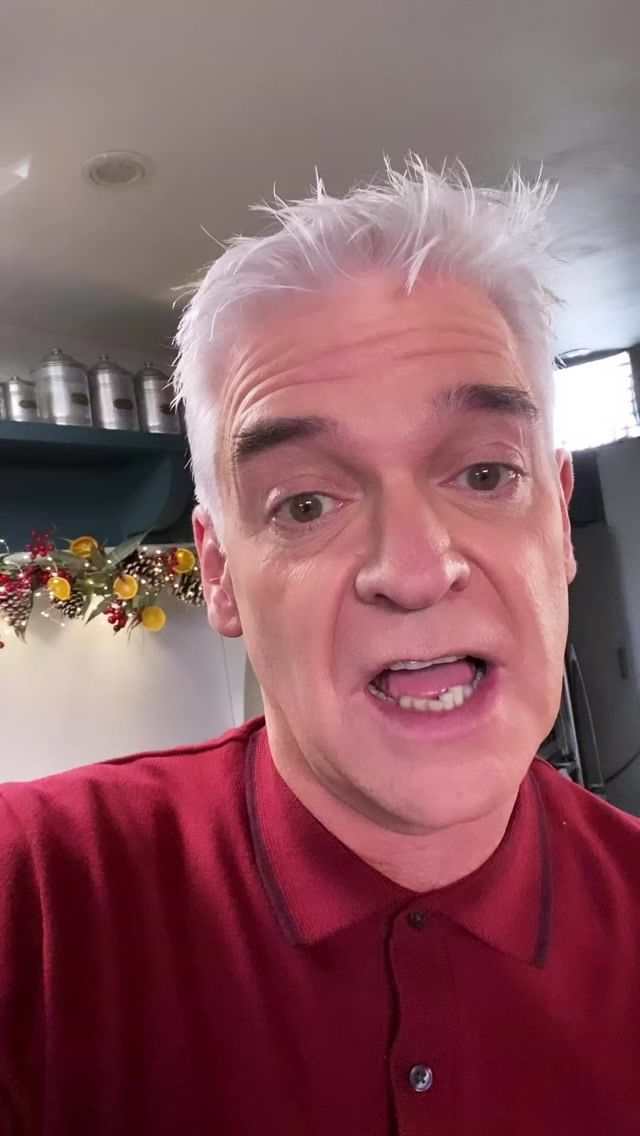 ITV told The Sun Online at the time: "To reflect the latest situation on travelling abroad at this time, this series has been postponed for now and will be screened later in the year."

Phillip had been set to team up with a new host Lucy Verasamy, who is best known for fronting the weather.

The series was supposed to begin with a prime 8.30pm slot – straight after Emmerdale – with the pair travelling to the Mediterranean.

However, with cases of the coronavirus soaring, the show was suspended at the last minute. 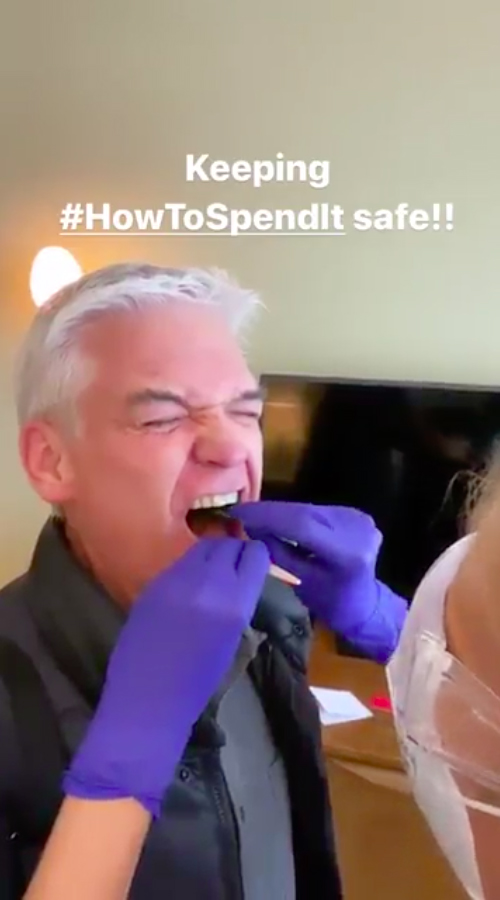 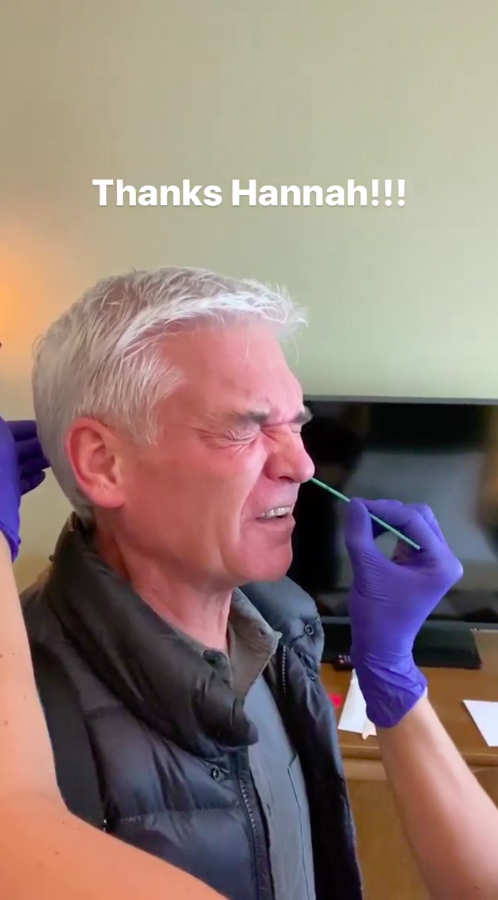 In its place was Griff's Great Australian Adventure, which sees the It'll Be Alright On The Night host journeying from Perth to Kalgoorlie.

The new show was announced by 39-year-old Lucy in January.

Elsewhere, Phil released his autobiography Life's What You Make It yesterday.

The star's new book is currently causing shockwaves as he details drugs and wild nights out as well as the moment he proposed to wife Steph naked. Khloe Kardashian had COVID-19: The star, 36, was diagnosed months ago
We and our partners use cookies on this site to improve our service, perform analytics, personalize advertising, measure advertising performance, and remember website preferences.Ok