Each of the Fab Five on the inspirational Netflix series Queer Eye have their own set role: Jonathan revamps your look, Tan overhauls your wardrobe, Bobby transforms your entire home, Karamo inspires you to be your true self, and Antoni does something with avocados.

But what would happen if the guys switched up their roles? It turns out they’re keen to make it happen for a one-off special… and Digital Spy got Antoni, Tan and Karamo to reveal who’d be the worst at what job.

Oh, the shade! Jonathan, if you’re reading, honey, maybe don’t click above to watch our exclusive interview. (Everyone else definitely should, though.) 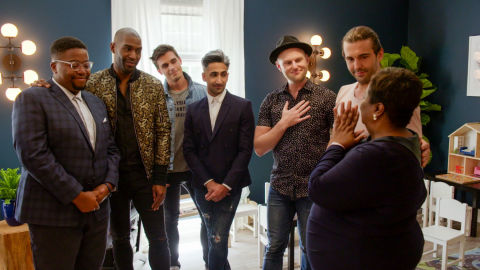 Queer Eye follows the Fab Five as they transform people inside and out, with its positive message and the endearing personalities of its hosts earning the series a huge following when it launched on Netflix in February.

A second season of eight episodes – shot back-to-back with the first – will drop this Friday (June 15).

The first season saw the cast give makeovers to straight men, but this time around they’re promising more variety. “The thing that we’re most excited about [in season two] is the diversity,” Karamo told Entertainment Tonight.

“We now have women that we are making over. We are also helping people in the trans community. We’re very excited about it.”

“It just gives us a chance to go a little deeper,” Jonathan added. “You got a chance to know the five of us, and the [season two] stories just get a little more into our lives as well. So we’re excited to show a little more of ourselves with everyone.”