Richard Madeley argues against BBC licence fee: 'Why should I pay it?' 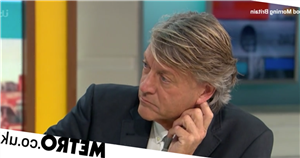 Richard Madeley has argued against paying the BBC licence fee on Good Morning Britain, asking why he should pay if he doesn’t use some of the services.

Culture Secretary Nadine Dorries indicated at the groundbreaking plans for an overhaul after stating the next announcement about the fee would ‘be the last’.

The BBC licence fee is an annual payment which is currently set at £159. It normally changes on April 1 each year but it is expected to freeze for two years until April 2024, at which point it’s speculated the fee will be axed.

While many stars have spoken out in favour of keeping the fee, Richard, 65, debated the issue with Susanna Reid, asking why he should pay.

‘We live in a culture of choice and we pay for our choices,’ he said.

‘Why should I be subsidising Radio 3? I never listen to it…There are all sorts of BBC services that cost a lot of money that I’m paying for in my licence fee. Why should I?’

Susanna said: ‘It’s interesting, what comes to mind when you say, “Why should I pay for the BBC licence fee when I don’t listen to Radio 1 or Radio 3?” You pay for the NHS even though you may never want IVF or you may never need cancer treatment.’

Richard responded: ‘But I elect a government on its agenda on how its going to spend my tax money I have a choice.’

Various stars have spoken out in support of the BBC licence fee, with BBC Breakfast and Strictly star Dan Walker sharing an image on Twitter of the different TV and radio channels aired on the channel, alongside the caption: ‘43p per day.’

In a later tweet, Walker, 44 clarified: ‘I am well aware that the BBC makes mistakes and needs to change, but the media landscape would be much poorer without it.

‘Those three letters are trusted and respected around the world.’

Love Actually actor Hugh Grant shared his thoughts on the possible plans and tweeted: ‘The BBC is something the whole world admires with envy. It is entirely appropriate that the insecure, spittle-flecked nut jobs of this government want to destroy it.’

Comedian Nish Kumar, 36, also wrote: ‘I know that it feels like absolutely everyone hates the BBC right now, and there are good reasons for that, but ending the licence fee is bad news.’

Ms Dorries indicated she wanted to find a new funding model for the BBC after the current licence fee funding deal expires in 2027.