Strictly Come Dancing 2018: Dance pairings, start date, judges and everything else you need to know

Strictly Come Dancing is here, and we could not be more excited.

After months of speculation, the celebrity line-up has now been completed and the dance pairings have finally been revealed.

Here, we fill you in on everything we know about Strictly Come Dancing 2018 so far. Remember to bookmark this page because we’ll be updating it regularly with every snippet of information that comes our way. Enjoy!

Strictly Come Dancing has announced all the details for its live dance shows, which start on Saturday 22 September from 6:15pm on BBC One.

The 15 couples – made up of dance pros and their celebrity partners – are currently training, so we’ll be tuning in then to find out how they’re getting on.

The 2018 series returned with its pre-recorded launch show on 8 September.

After walking the red carpet, the contestants entered the ballroom and found out which professional dancer they would be paired with. The dancers also took to the floor for the first time for a group performance.

Digital Spy was at the red carpet launch, catching up with the stars of the new series.

Stacey Dooley was quick to hit back at criticism surrounding the line-up (as well as revealing which pro dancer she has her eye on), whilst Vick Hope shared her embarrassing first encounter with Steps’ Faye Tozer.

What’s more, YouTube star Joe Sugg told us all about the emotional reason he decided to do the show, and Blue’s Lee Ryan admitted that his daughter will be voting for Joe instead of him.

2. Strictly Come Dancing 2018: What are the first show’s dances?

With the very first show just around the corner, the BBC has revealed the dances and songs for each pairing. They are as follows:

Cha Cha Cha to ‘Ain’t No Love (Ain’t Not Use)’ by Sub Sub, featuring Melanie Williams

Cha Cha Cha to ‘How Will I Know’ by Whitney Houston

Samba to ‘Soul Limbo’ by Booker T and The M.G.’s

Waltz to ‘When We Were Young’ by Adele

Waltz to ‘I’m Kissing You’ by Des’ree

Waltz to ‘Take It To The Limit’ by The Eagles

Tango to ‘SexyBack’ by Justin Timberlake

Quickstep to ‘Dancing’ by Kylie Minogue

Jive to ‘Feel It Still’ by Portugal. The Man

3. Strictly Come Dancing 2018 changes: will there be any shake-ups?

Whilst the winning format seems to be remaining the same, it has been revealed that the famous glitterball trophy will look different this year.

With 15 winners, it now means there’s not enough space left on the trophy for another name to be added. The BBC confirmed that the glitterball will be mounted on a bigger base to accommodate another engraved plaque at the end of the series.

The news was announced on BBC Breakfast (August 13) with Katie saying: “I’ve known for a while and it’s been really hard to keep it a secret.”

Steps star Faye Tozer and Red Dwarf‘s Danny John-Jules were the second and third celebrities to be confirmed for 2018, with Faye later defending her dance experience.

“Even though I have got some experience, I don’t have any ballroom experience, so I’m really excited get my teeth into that, dance with a partner and be whisked around the floor,” she explained.

Joe Sugg, YouTube star and brother of Zoella, was the fourth name revealed to be taking to the dancefloor, following rumours linking him to this year’s series.

If you don’t know who he is, you can find out all you need to know about him here and we’ve had some thoughts on why he could be a great signing for Strictly.

Capital Breakfast presenter Vick Hope was the fifth celebrity confirmed, calling it a “huge honour” to be a part of the show.

Cricket veteran Graeme Swann became the sixth contestant announced during an interview with BBC Radio 2, and admitted there’s one aspect of the show that he fears.

“There’s one thing I’m really worried about — waxing my chest,” he complained. “It gives me clammy palms just thinking about it. It’s going to be horrific! It takes me two days to get a plaster off.”

The seventh signing was one of This Morning’s very own and, naturally, was announced on the daytime show to be none other than Dr Ranj Singh.

Stacey Dooley became the eighth to be revealed, and the news was shared on Strictly‘s Instagram page following an investigation to find out who had the secret codename ‘Cheddar’.

No stranger to the small screen, she has made Stacey Dooley Investigates documentaries for BBC Three since 2009, covering everything from child labour to tourism.

She’s also presented Brainwashing Stacey and Show Me What You’re Made Of.

Stand-up comedian Seann Walsh and BBC News presenter Kate Silverton were added to the bill during The One Showon Friday night (August 17).

Whilst chatting with host Alex Jones and guest presenter Rory Reid, Kate said of her dance experience: “It consists of me mouthing the lyrics in the kitchen, in front of my kids.”

“I just thought it would nice to do something where I could come out of the other end with a skill, and be able to dance,” Seann joked. “But looking at your faces, I’m thinking it was a mistake!”

After much speculation, Lee Ryan was announced on Loose Women on Monday (August 20).

“I’m so excited to be joining this year’s Strictly line-up,” the former Blue singer said. “It is a real honour for me and I can’t wait to get out on the dance floor.”

After Lee came Paralympian Lauren Steadman who revealed that even though she hasn’t got any ballroom experience, she has had some salsa training that could come in handy.

“My housemate is Colombian, so it just comes together with that. We went to a couple of lessons four or five years ago… I’ve got the basics,” she explained. “It might get me somewhere on the show.”

The line-up was completed with the double bill of former What Not To Wear co-host Susannah Constantine and Casualty‘s Charles Venn, who also previously starred in EastEnders.

Strictly shared its very first look at the new series, tweeting a snap of the professional line-up on day one of rehearsals. Eee!

Three new professional dancers are joining the show for the 2018 series. The BBC revealed that newcomers Graziano Di Prima, Johannes Radebe and Luba Mushtuk will all be making their way to the dance floor, as part of the biggest cast of pros yet.

Sadly, Brendan Cole won’t be returning. The pro dancer appeared on ITV’s Lorraine at the start of the year, where he revealed that the BBC had not offered to extend his contract, and broke the news to him over the phone.

“It’s quite, actually, hard to talk about,” Brendan said. “The BBC haven’t renewed my contract. We get contracted year upon year.

“They’ve made an editorial decision to not have me back on the show. I’m a little bit in shock. I’m quite emotional, a bit raw about it.

“It’s done via a process of a phone call and stuff. I have had 15 incredible series on the show. I’m very proud of the whole show. It’s a great team.” 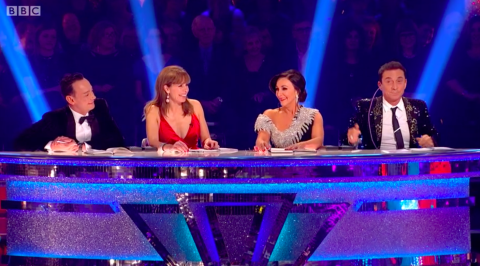 Head judge Len Goodman retired in 2016 after 14 series – and we still miss the heck out of him.

Darcey Bussell, Bruno Tonioli and Craig Revel Horwood will be returning to the judging panel.

After Len retired, the Beeb hired his very good friend Shirley Ballas, also known as the ‘Queen of Latin’, to replace him last year and apparently, Len was delighted she got the job.

However, she didn’t get off to a great start last series and was given a rough ride by viewers.

7. Strictly Come Dancing 2018: Will there be same-sex couples?

It’s been a question that we’ve all been asking numerous times over the years, but a spokesperson shut the idea down for another year this week.

The statement said: “Strictly has chosen the traditional format of mixed-sex couples and at the moment we have no plans to introduce same-sex couples.”

A same-sex couple took part on Israel’s version of the show back in 2010 and America’s Dancing with the Stars made history in 2016 with a same-sex dance – so here’s hoping that it may be considered in the future.

We’re pleased to report It Takes Two is 100% coming back. Zoe Ball confirmed that she will be returning to our screens to present the spin-off series.

Speaking on This Morning, she told Phillip Schofield and Holly Willoughby that she’d signed up for another series. However, when the presenting duo pressed her to spill some secrets on the celebs taking part, she suddenly became very tight-lipped: “They never tell me anything, because I have a big mouth. You just have to wait and see.”

9. Will Len Goodman make an appearance on Strictly Come Dancing 2018? 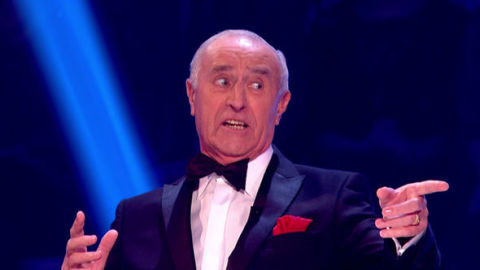 Len was supposed to last series but didn’t, despite hinting that he would. During an appearance on The One Show, the retired judge said he would be be back for sure, just not on the judging panel.

Fingers crossed he decides to grace us with his presence this series. We hope you’re reading this, Len!

10. Where can I see Strictly’s tribute to Bruce Forsyth again? 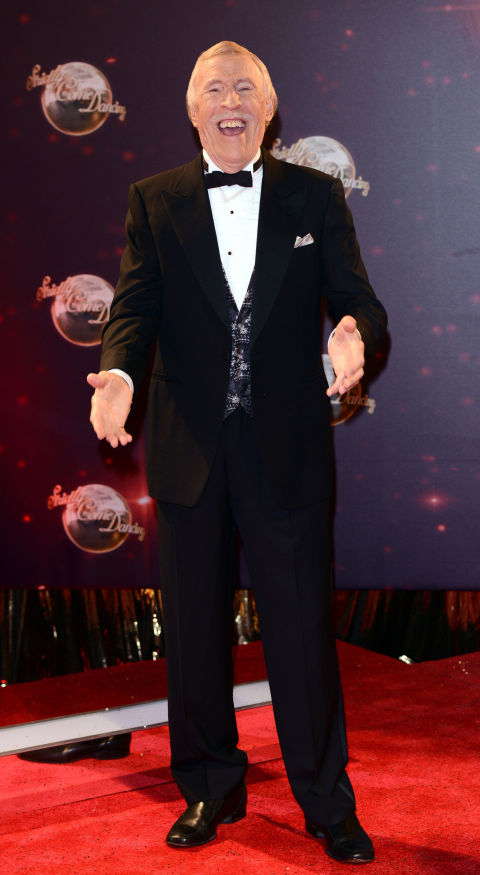 Strictly Come Dancing paid a moving tribute to former host Sir Bruce Forsyth, who sadly passed away at the age of 89 in August 2017.

Brucie was honoured during Strictly’s 2017 launch show in September, with producer Louise Rainbow originally confirming the news and revealing that the professional dancers would group together for a “heartfelt” dance in his honour.

“The thoughts of everyone here at Strictly are still very much with Sir Bruce’s family,” Louise said in a statement at the time.

“Of course, we will be paying tribute to Sir Bruce at our launch show and this will include a heartfelt performance from our Strictly professional dancers.

“We all want to celebrate him and all that he loved about the show. Sir Bruce was, and will always be, a huge part of Strictly Come Dancing.”

And they did him proud with this tribute, and a routine that moved his long-time co-host and friend Tess Daly to tears.