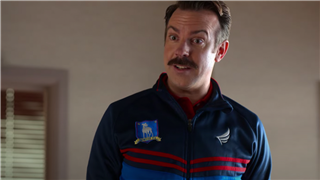 Ted Lasso and AFC Richmond are back for season 2!

The beloved Apple TV+ sports comedy announced on Tuesday that its sophomore season will debut on the streaming service on July 23, and shared a first look with fans at how Ted (Jason Sudeikis) and his team will be handling relegation in the upcoming episodes.

It seems like things might get off to a lukewarm start — with an announcer declaring the team has racked up not two, not three, but eight straight of Ted’s dreaded tie matches. Of course, the skipper remains characteristically positive.

“I don’t care what our record is,” he declares. “It’s all about believing that everything’s going to work out in the end, exactly as it’s supposed to.”

Season 2 will also introduce I May Destroy You’s Sarah Niles as a seemingly straight-laced sports psychologist whom Ted is unable to win over with his coveted homemade biscuits.

The fan-favorite series has earned major critical acclaim as well since debuting last August. Sudeikis recently won a Screen Actors Guild Award and a Golden Globe for his titular role as the fun-loving fish out of water, and the series also won three Critics Choice Awards, two Writers Guild Awards, and was also the only comedy series honored as an AFI Program of the Year.

The Ted Lasso character was originally born from a series of 2013 promotional spots Sudeikis did for NBC Sports’ coverage of the English Premier League, and while accepting the show’s Critics Choice Award last month, the former SNL star credited his ex, Olivia Wilde, for inspiring him and creators Bill Lawrence, Brendan Hunt and Joe Kelly to continue working on the character.

“I want to thank my kids, Otis and Daisy, and I want to thank their mom, Olivia, who had the initial idea for this as a TV show,” Sudeikis said in his speech. “She was like, ‘You guys like doing that so much, you should do it as a movie or a TV show,’ and she was right!”