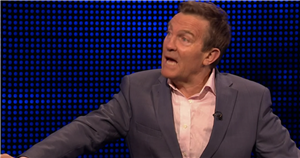 The Chase host Bradley Walsh was left in disbelief on Friday afternoon while hosting the latest edition of the popular ITV quiz show.

The cheeky presenter welcomed four new contestants to the show and was eager to see them get through to the final with some money in-hand.

Shaun Wallace, aka the Dark Destroyer, was in the hot seat trying to prevent the hopefuls from going home with the cash prize.

Sally, Armin, Karen and Ryan all took it in turns to take on the cash builder and later went head-to-head with the Dark Destroyer in an intense round of general knowledge questions.

Armin was the first contestant to try his luck and managed to answer five questions correctly in his cash builder round, earning £5,000.

Ahead of the head-to-head round, the player was given three options by the Chaser.

He could play for the money earned in the Cash Builder and start three steps down the board, requiring five correct answers to reach home.

Shaun turned to his teammates for some advice and contestant Ryan told him that he thought the £25,000 high offer was "a bit stingy"

The TV star wasn't the only one shocked at Ryan's comment.

Viewers at home rushed to their keyboards to discuss Ryan's reaction to Armin's high offer.

Taking to Twitter, one fan penned: "£25k is stingy? Ryan looks the type to take the low."

While a fourth social media user said: "I just don’t like Ryan already."

Armin, Sally and Karen made it through to the final round and Ryan was the fourth contestant to take on the Dark Destoryer.

However, things didn't go quite to plan for the Safari Education Officer and he didn't manage to get any questions correct in his Cash Builder round.

He decided to play for £0 in his head-to-head round against Shaun but he unfortunately got caught by the Chaser.

The Chase airs weekdays on ITV at 5pm