Season 4 of The Crown marked the official debut of Princess Diana, who is portrayed by 24-year-old Pennyworth actress Emma Corrin. Spanning from 1979 to 1990, the new season not only chronicled Lady Spencer’s introduction into the family and her rocky marriage to Prince Charles (Josh O’Connor), it also shined a spotlight on several of her early, iconic fashion moments.

In total, costume designer Amy Roberts and assistant costume designer Sidonie Roberts made 80 individual pieces for Diana this season, including 17 outfits for the show’s recreation of her and Charles’ 1983 tour of Australia and a near identical replica of her wedding dress under the guidance of original designer David Emanuel. 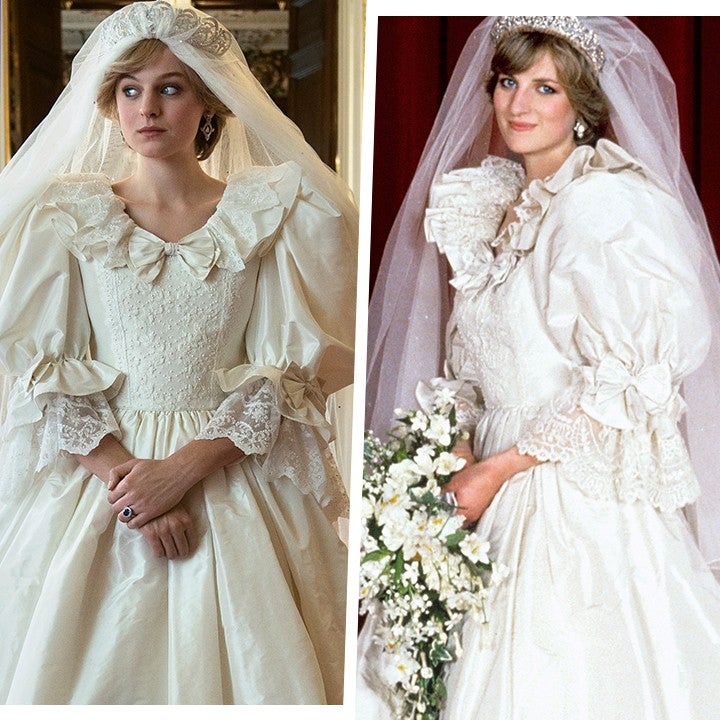 Princess Diana in her wedding dress

Unsurprisingly, the latter, which included a 25-foot silk train and 153-yard-long veil made of tulle and took nearly 10 people help Corrin put it on, is the actress’ favorite. “I do actually think it was the wedding dress because it’s so spectacular that it kind of can’t compete,” says Corrin, who also took a liking to Diana’s more playful and casual moments, like her YSL bomber jacket and many now-iconic jumpers.

Ultimately, every day was an “unbelievable” experience. “I just loved going in and there’d be, like, a new incredible costume hanging in my trailer,” she adds. “It was mad.”

Meanwhile, hair and makeup designer Cate Hall was responsible for six precise “Diana-cut” wigs that were styled and colored to match specific moments reimagined onscreen. As for the makeup, Hall chose to keep Corrin’s look as natural as possible during Diana’s younger years, eventually recreating certain ‘80s trends, like blue eyeliner and mascara, to age the actress up as Diana got older and emotional stakes grew more intense. 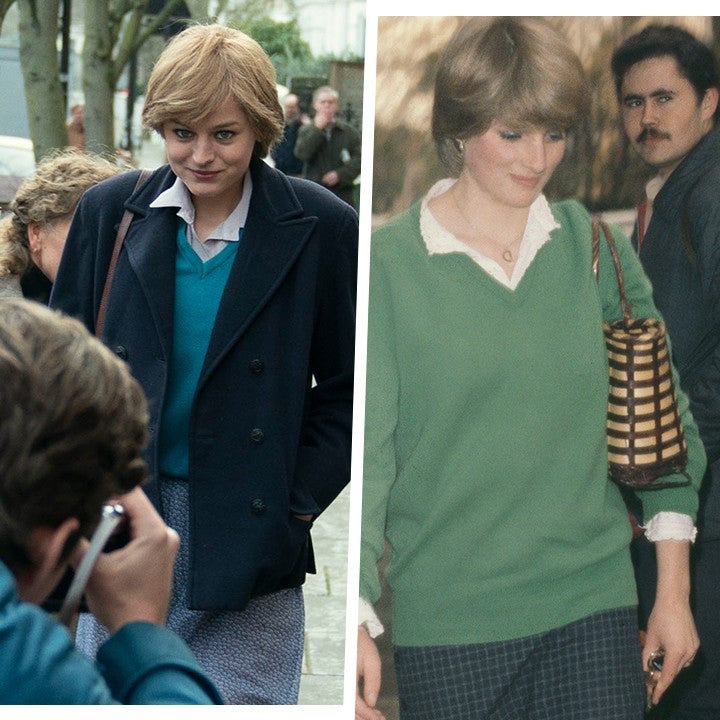 Princess Diana outside her home in 1980 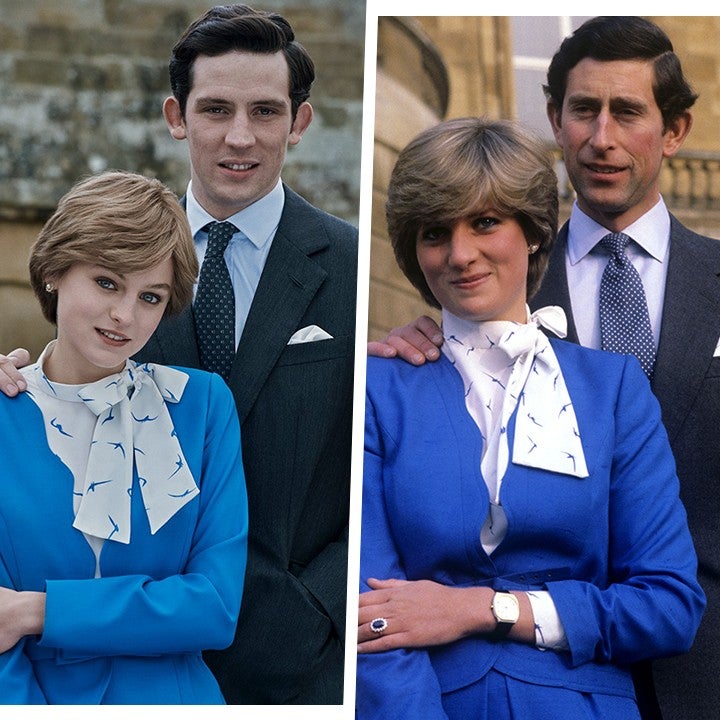 Princess Diana and Prince Charles at their engagement announcement.

With certain moments, like Diana’s wedding dress and her off-the-rack engagement suit from Harrods, the costume designers adhered as closely as they could to the original. And while her tour of Australia was heavily documented, the clothes she wore during it were admittedly some of the hardest to mimic. Those dresses were made of fabrics that are so specific to the time period and were harder to source in contemporary fabric shops. (Yet, during filming of season 4, they still managed to create several twinning looks.)

Beyond that, they were afforded a creative license when recreating some of the princess’ other looks, particularly for lesser-known public events or private moments inside the palace. In fact, at times, the show consciously strayed from what Diana actually wore to help fit the journey creator Peter Morgan was ultimately telling onscreen. 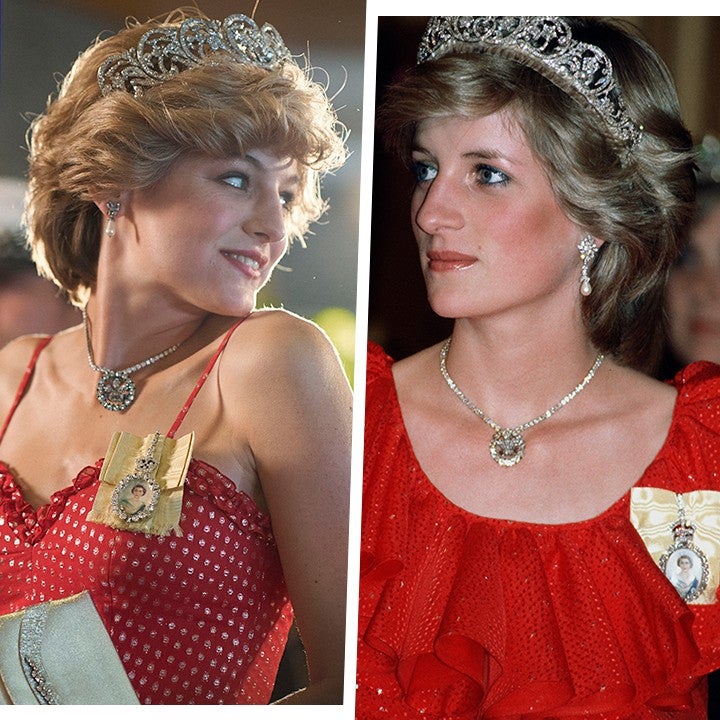 Princess Diana at a gala in Hobart, Australia

But no matter how exact or how creative the costumes were to Diana’s real-life moments, the series new they had captured her spirit with Corrin.

Although she already bears a striking resemblance to the late princess, who died in 1997, the actress tells ET there was still a moment when they were getting ready when they knew they had captured Diana’s spirit. “I was sitting behind a mirror and there was a picture behind me for reference and I remember tilting my head the same way during the wig fitting and everyone going, ‘Ohhhh,’” she recalls.

O’Connor, however, remembers it being far more dramatic than that when Corrin would appear on set. “Seeing Emma for the first time as Diana was spooky,” he says. “It’s because we have such a clear memory of Diana. And so when Emma steps out with a wig and the amazing costumes… it was, like, really haunting, I thought.”

The Crown season 4 is now streaming on Netflix. Gemma Collins pens letter to Meghan Markle about her own miscarriage Strictly’s Maisie Smith says Kevin Clifton is supporting her after she landed in dance-off again
We and our partners use cookies on this site to improve our service, perform analytics, personalize advertising, measure advertising performance, and remember website preferences.Ok