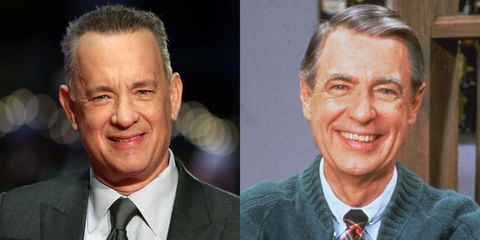 The most likable star in Hollywood playing perhaps the most likable person in modern history? Yes, it’s happening, in the form of Tom Hanks portraying Mister Rogers.

Sony Pictures released the first image of Hanks as Rogers on Thursday, noting he was “coming to a neighborhood near you” in October 2019. Hanks is wearing a classic red cardigan reminiscent of the sweaters Fred Rogers opted for on his children’s show, Mister Rogers’ Neighborhood.

The movie, You Are My Friend, is based on a 1998 Esquire profile by Tom Junod. The movie is not quite a Fred Rogers biopic, but instead the story of a journalist and his relationship with Rogers. “It’s a story for our times, a story about kindness and family connection and trying to tap into our better self,” director Marielle Heller told Entertainment Weekly. “God knows we need that right now!”

The photo was released while, in Washington, senators were questioning Supreme Court nominee Brett Kavanaugh along with Dr. Christine Blasey Ford, who accused him of sexual assault when they both were teenagers. Twitter users took notice of the timing, and expressed thanks for the brief moment of positivity.

You Are My Friend hits theaters in October 2019.