Like the main character in her debut feature “The Novice,” filmmaker Lauren Hadaway is extremely driven, goal-oriented, and methodical. She’s also a little intense. No big surprise — you’d have to be to land five Indie Spirit nominations for your first movie — including nods for Best Feature and Best Director. Based on the writer-director’s own experience, “The Novice” follows a college freshman who joins the crew team with no prior experience. Fueled by a newfound love of the intensely competitive sport and her own obsessive ambition, she spirals into a physical and psychological hell of her own making. But unlike her severe protagonist Alex Dall (a forceful Isabelle Fuhrman, nominated for Best Female Lead), Hadaway has a healthy sense of humor about herself.

“I asked one of the rowers that I based one of the characters on,” Hadaway said during a recent video interview. “I was like, ‘What did everyone think of me back then?’ And she’s like, ‘Everyone thought you were fucking psychotic.’ She said it with love, of course. But I was like, ‘Okay, yeah. Maybe I was a little over overzealous.’”

From her nearly 50 sound credits as well the obvious technical precision of “The Novice,” it’s clear Hadaway pursues filmmaking with the same laser-focused fervor Alex brings to rowing. Calling herself “goal-oriented,” Hadaway arrived in Los Angeles with the goal of working on a Tarantino movie — a few years later she was sound effects editor on “The Hateful Eight.” She was sound editor on Damien Chazelle’s “Whiplash,” probably one of the most sound-forward films ever made. She’s also engineered for Zack Snyder’s “Justice League,” “Army of the Dead,” and the infamous Snyder Cut.

The leap from sound engineer to writer-director certainly isn’t a typical creative transition, and it’s all the more interesting coming from a woman used to working on so many male-dominated projects. To hear Hadaway speak, one would never know she once suffered from impostor syndrome, but it’s what initially drew her to sound and away from directing. 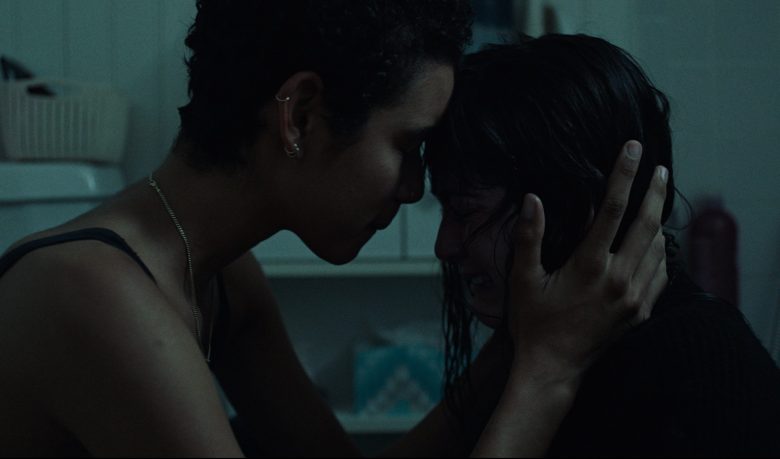 “I saw ‘Kill Bill’ when I was 15 and I was like, ‘I want to be a fucking director. Got to do it.’ Blew my mind. …Went to college and immediately was hit with imposter syndrome,” she said. “I’m a little redneck, I go to this school and there’s all these big city dudes and they got all the cameras and the lenses. And they’re all so confident and suave, and have all the fancy software. And I was like, ‘Well fuck, I can’t be a director.’”

She rose up the ranks in sound engineering very quickly, landing “The Hateful Eight” when she was 25 and “Justice League” at 27. Well within reach of hitting her goal of supervising sound for features by 30 (there’s that Alex Dall–like drive), she realized she was always going to be working on “someone else’s baby.”

“You’re in the industry long enough and you kind of see how the sausage is made. And some of the mystique goes away, some of the thinking that everyone is this brilliant creative genius, and you couldn’t possibly compare. And so I was like, ‘Well, maybe I can try my hand at this,’” she said. “I wish people coming up who feel this imposter syndrome, who feel like maybe they don’t have a technical background or whatever… You don’t need that. You need to have a basic understanding and you need to be able to communicate. You don’t have to know everything. You just have to know your vision.”

She also embraces another creative tenet: steal from everywhere. Many artists follow some version of this idea, but to quote Jim Jarmusch: “Nothing is original. Steal from anywhere that resonates with inspiration or fuels your imagination.” For Hadaway, inspiration clearly came from Darren Aronofsky’s “Black Swan,” the closest comparison for Alex’s obsessive pursuit of excellence in “The Novice.” Hadaway has no qualms admitting she took inspiration from the film, which she played “on loop” during the editing process.

“I was very much thinking Aronofsky, and that kind of the psychological clusterfuck of things, and how it looks and how it feels. I would watch ‘Black Swan’ on loop, over and over and over. Probably watched it 15 times,” she said. “And I would cut from that, and I would watch the first 15 minutes of ‘Black Swan’ and watch the first 15 minutes of ‘The Novice,’ and figure out what was working and how it was working. And trying to be very analytical about these creative things, I don’t think that was a solution, per se. You can’t, like, map your points. But I tried anyways, and all that simmering and whatever, eventually things kind of clicked.”

While Natalie Portman’s character in “Black Swan” has an overbearing mother and exacting director contributing to the film’s horrific pressure cooker, Alex Dall’s motivations are entirely internal. That’s another unique spin on what Hadaway calls “obsessed artist films,” and one that is true to her.

“I wanted to tell a story of grit and ambition. But the thing I’ve never related to with these films is, there seems to always be this external force. There’s a coach or an overbearing parent, or they’re trying to make the Olympics or win the big game. Which you need in film, because you need external conflict,” said Hadaway. “But for me, I’ve always felt internally driven. This isn’t a novel, you can’t write all these obsessive thoughts. You have to put that on the screen. Most people probably haven’t felt this level of obsession. How do I put the audience in the head space of this character?”

With the help of powerful performances, deftly crafted editing, and an acutely tuned score and soundtrack, “The Novice” manages to do all of that and more. The audience is sucked indelibly into Alex’s fanatical headspace — whether they like it or not.