'This Is Us': Kevin and Madison 'Don't Want to Let Go' of Their Relationship

The chapter may be closed for good for Kevin and Madison in This Is Us. The co-parents share a special relationship, and while many fans are rooting for them to become romantically involved again, they might not be meant to be together. But due to Nick and Franny, Kevin and Madison will always be in each other’s lives and have a deep bond.

Kevin and Madison called off their wedding in the This Is Us Season 5 finale because he couldn’t admit that he was in love with her. But in season 6, there’s been a lot of tension and unspoken words between them. And it didn’t help when Madison started dating Elijah, and Kevin became weird about their situation.

Kevin has always been unsure of his feelings and how to interpret them. Thankfully, in This Is Us Season 6 Episode 11, Randall was there to help Kevin process his thoughts after finding out Elijah would propose to Madison. Kevin was uneasy about the situation, and as a result, he had second thoughts about ending things with Madison. However, thanks to Randall, Kevin realized that he still couldn’t say that he was in love with her.

At the end of the hour, Madison told Kevin that she knew Elijah was planning on proposing. She admitted that the idea excited her, and Kevin said he was happy for her.

Following the premiere of This Is Us Season 6 Episode 11, executive producer K.J. Steinberg discussed Kevin and Madison’s relationship with Entertainment Weekly.

“I think it’s beautifully closed [after episode 11],” she revealed. “But whenever there’s love between people — real love, which they do have, and the inextricable bond of sharing children — there’s always a possibility. For these characters in this moment, it’s actually this deeply bittersweet definition of what love can look like, in a different form.”

As for why Kevin and Madison shared many lingering looks in episode 11, Steinberg said, “They do not want to let each other go. That’s the answer. But sometimes, you have to — in certain ways.”

Of course, Steinberg doesn’t want to say outright that Kevin and Madison are officially over in This Is Us. But it sounds like they’ve officially closed a chapter, and they are starting a new one as co-parents who love each other, just not romantically. Madison will likely marry Elijah. And Kevin will hopefully find the woman he’s meant to be with very soon. 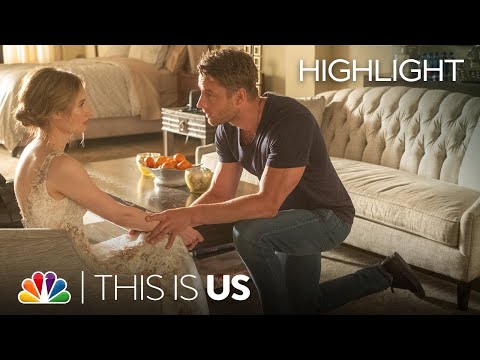 Who will Kevin end up with?

Although Madison is likely not Kevin’s soulmate in This Is Us, he still has a couple of options. But Cassidy is not one of them. Justin Hartley told Entertainment Weekly that he “thinks” fans can rule out Cassidy as a love interest for Kevin.

He said, “But I also think that, you know … [laughs] This is Kevin. Which way the wind blows, you never know. Something could happen, and all of the sudden, he’s like, ‘Wait a minute, wait a minute. You are the one for me!’ So he’s struggling with that. But I think he’s settling down into that idea that they’re friends. And important friends, and necessary friends. And he’s comfortable with that. I think.”

So if Madison and Cassidy are out of the picture, who does that leave? Of course, many fans will immediately jump to Sophie, Kevin’s childhood love and ex-wife. But Kevin could also end up with someone new or with no one.