This Is Us Recap: Ride or Cry

We don’t talk enough about what This Is Us‘ Early Years Rebecca went through.

Let’s just think back to the series premiere for a minute. After carrying three babies for many months, Rebecca underwent immensely traumatic labor and an emergency caesarean section. And when she woke up afterward, she had to learn that one of her children hadn’t survived the horrific ordeal.

Yes, the Pearsons’ on-the-fly decision to adopt Randall was heartwarming (if not without lifelong issues). And yes, babies are cute and can have an outsized capacity to make you feel better when you’re down. But this week’s episode starts to get at how the loss of little Kyle isn’t something easily glossed over, especially in the physically aching, sleep-deprived state in which Rebecca finds herself on the ride home from the hospital. And though I focus on the new mom, it’s not like Jack gets off much easier here: As we see in Tuesday’s hour, he’s sad, too. And his demons are so close at hand, they’re practically riding shotgun the whole way back to the house.

That trip between the hospital and home is the focus of every storyline this week. So let’s see how it goes for Madison and Kevin; Toby, Kate and Ellie; Randall and Beth; and the aforementioned Pearson progenitors. Oh, and did someone say FLASH-FORWARD? Read on for the highlights of “The Ride.” 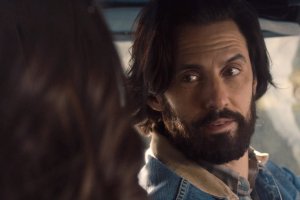 ‘WE HAVE A FAMILY’ | Jack and Rebecca prepare to bring Kevin, Kate and Randall home from the hospital. Jack is trying his best to inject some joviality into the day, but Rebecca seems overwhelmed and sad… probably because she’s overwhelmed and sad. Jack’s bravado burns off the minute he realizes he’s a) got to install three carseats and has no clue how, and b) might be even more like his father than he realized.

This last revelation plays out as they’re in transit. Rebecca is an anxious mess about not being able to see the babies in the backseat. The kids start crying. And an impatient and reckless driver honks at Jack to go faster, then speeds up and cuts him off just as both vehicles are pulling into a gas station. Jack has to stop short in order to avoid an accident, and that’s IT.

He bursts out of the car and starts yelling at the other driver, who is unrepentant about what just transpired. Jack even reaches through the open window to grab the guy’s shirt, but Rebecca’s angry cries stop him from doing anything more violent/stupid. Inside, when Jack pays for the gas, he also buys — and quickly drinks — a nip of whiskey. Then he asks Rebecca to drive home, saying he can more easily turn in his seat to keep an eye on the kiddos.

When they arrive, all three babies are asleep. So Jack and Rebecca decide to sit in the car until that changes. She mentions that her mother had a miscarriage when Rebecca was a child, and her sadness lasted a while. “What if I can’t be a great mom because I’m just too sad for too long?” she worries aloud. Jack reassures her that won’t be the case, the confesses about his mid-trip sip. “I was feeling really overwhelmed by everything that’s happened, and I was just trying to keep it together,” he says. Then he remembers how terrible his father was, and how drunk; every night when he came home from work, “all the air would get sucked out of the room.” Jack is concerned he’ll wind up the same way. “You don’t suck the air out of the room. You are the air,” Rebecca says, boosting him. He kisses her hand, Bread’s “Everything I Own” comes on the radio, and the mood lightens. “We have a family,” she says, smiling. 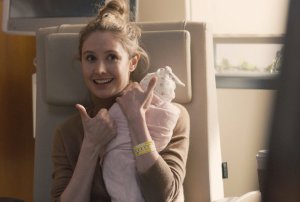 BABIES’ FIRST PAPARAZZI ENCOUNTER | Similarly, Kevin is having a lot of thoughts and feelings as he and Madison prepare to bring Nicky and Franny home. And all of these boiling emotions bubble over when he realizes there’s a paparazzo following them. He pulls over and gets out to yell at the guy, who is unmoved by both Kevin’s threats and Madison’s attempts to relate to him on a human level. So then Mads — who handles things like a boss throughout this episode, I might add — quietly negotiates a deal: If he leaves them alone, she’ll give him a heads-up for when Kevin goes running on Tuesdays, and he can grab a few shots then. Sure, she has to agree to Kev’s being “shirtless” and “in tight shorts, so I can see his package,” but it all ends well. Back at the car, she slips into the driver’s seat and lovingly tells Kevin that she’d like him to nap the rest of the way home. “I’m going to need you at your best,” she points out, “and aggro, Liam Neeson-movie Kevin is not your best.”

While he sleeps, Kevin dreams that Jack is holding Franny and Nicky. “Do ’em a favor: Stop living up to me. I was terrified of being like my dad, and you’re terrified of not being like yours,” Grandpa Jack says. “Close your eyes, decide what you want, and then you go and get it, son.” Kevin wakes up alone in the car, goes inside and does what he’s best at: making a grand gesture based solely on emotion with little thought about how its ramifications. He finds Madison in the house and says that even though they’ve been engaged for a while, he wants to do for real tho. “I really want you to be my wife. I want to be a family,” he says, slipping his hospital bracelet onto her wrist in lieu of a ring. She seems touched and says yes, then they kiss. 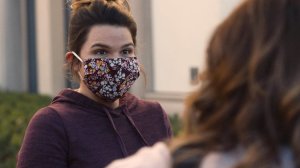 ELLIE’S OUT | Toby greets Kate and their new daughter outside the hospital with a huge sign that reads, “Hi Hailey, I’m your dad!” Then they ferry Ellie home, with Kate chattering about future meet-ups and such. But Ellie barely engages, until she suddenly and tearfully announces that she doesn’t think she wants to take part in an open adoption anymore. Yes, Hailey is still Kate and Toby’s. But Ellie doesn’t feel emotionally OK with being a part of the girl’s life. Kate presses a little, confused, but Toby gently tells her to back off.

Later, at home, Kate is upset: Randall’s adoption was so secretive, she says, and it brewed so much pain for him and the family. “I promised myself it would not be like that for Hailey,” she says. Toby says they’ll always make sure their daughter knows exactly where she came from. And once that crisis has passed, Toby lobs another one onto the court: He got laid off that morning. Kate does not freak out, saying that they’ll figure out job stuff the next day. “Let’s just be a family today.” 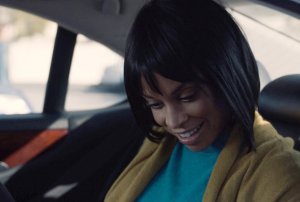 TWO BLIZZARDS AND A WARNING | As Beth and Randall leave the hospital after Annie’s birth, they’re feeling pretty good about how smoothly everything is going. Annie is a calm, smiling angel baby. They’ve packed in a way that is prepared for any little need that arises on the way home. And Beth is going to get the Dairy Queen Blizzard Randall promised her while she was in labor. It all goes well until Randall won’t stop raising the idea of having a third child so they can “go for a boy.”

Beth — far nicer than I would be, were I the one likely sitting atop a donut pillow for the drive home — says no… and then hell no when her husband doesn’t get the hint. While she burns off a little ire ordering the ice cream, Randall tells his new daughter that he’s so happy she looks like him, because he grew up not looking like anyone in his family. Then he muses a bit about his grandchildren and great-grandchildren, and Beth comes back with two Blizzards. She’s no longer testy, and the pair joke and smile. But Randall, I really wouldn’t bring that all up again.

BACK TO THE FUTURE | Especially because, as we know — and as is illustrated in the episode’s flash-forward — Randall eventually does have the three children he wanted.

But let’s back up a second. Throughout the episode, we watch as a female medical intern (I think — if these are actually residents we’re looking at, someone please holler) gets an orientation to the labor and delivery department of a hospital. But she’s not into it, and she asks one of her colleagues to cover her as she sneaks out.

Outside the hospital, she’s picked up by another young woman. There’s a big screen in her car near the driver’s console, which was my first hint that we were in the future. The driver gives the doctor a Sophie teething giraffe: Turns out, the intern is pregnant, herself, though she hasn’t told anyone yet.

They drive and eventually arrive at Kevin’s cabin. Tess comes outside to meet them, and that’s when we realize that the driver is Annie and the doctor is Deja. When Old Randall joins them outside, they ask how he’s holding up. He replies he’s doing better now that they’re there. Everyone starts to go in, but Randall and Deja are held up when they notice the arrival of another car. (We don’t see who’s inside.) He asks her how the drive was, and she says OK: “It always goes by faster than you think.” (And for a very deep dive into this flash-forward, make sure to check out our ongoing investigation.)

Now it’s your turn. What did you think about the episode? Sound off in the Comments!