Major spoilers for the Westworld season 2 episode ‘Phase Space’, so don’t read ahead unless you want the show completely ruined for you.

Westworld made sure to end on a seriously shocking note last night (May 27) as Dr. Robert Ford (Anthony Hopkins) is back. Somehow. Sort of.

The last time we saw him he was definitely dead. Dolores (Evan Rachel Wood) went rogue and shot him in the back of the head at the end of season one. Maggots are now eating his face. You can’t argue with that. 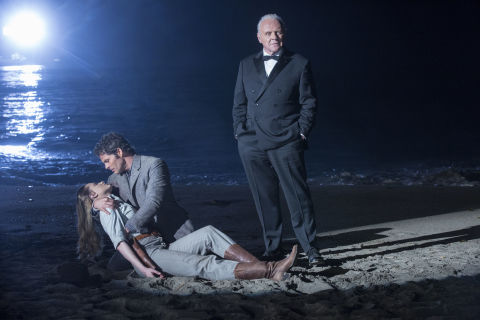 But yes, Ford still made a sensational return during Sunday’s episode – or, to be more precise, his mind made a return.

Towards the end of the episode, we see Bernard (Jeffrey Wright) take out his robot brain – with the help of Elsie (Shannon Woodward), of course – and upload it to ‘The Cradle’, which is basically Westworld’s mainframe.

Bernard then walks around inside a simulated version of the park. He sees versions of Dolores and Teddy (James Marsden) before entering the Mariposa Saloon. It’s in there that he sees a reflection of Ford’s face staring back at him.

So that ball thing that Bernard was messing around with? Yeah, that was Ford’s consciousness. We think.

Westworld airs Sundays in the US on HBO and 9pm on Sky Atlantic in the UK.