What Just Happened With the Baby on 'Perry Mason'?

Something very strange just happened on the HBO series 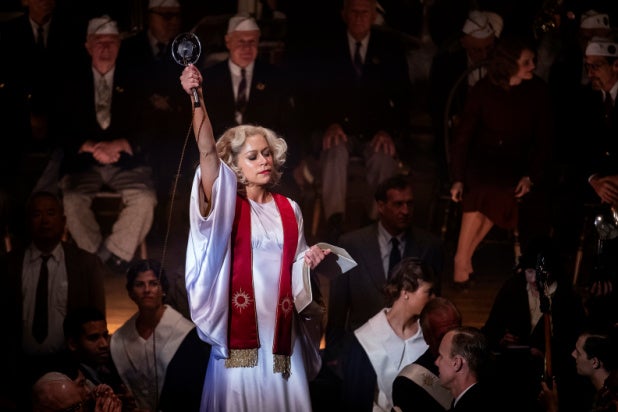 (Spoilers ahead for the Aug. 2 episode of “Perry Mason” on HBO)

We’ve been waiting a month to find out what would happen when Sister Alice (Tatiana Maslany) opened up baby Charlie Dodson’s coffin, and the day finally arrived this week. And, uh, things did not really go the way we expected it to go.

We didn’t really think she would actually bring the baby back to life, of course. It’s not that kind of show. But clearly she was going to do something. We just didn’t really know what that something was. And maybe we still don’t. But I’ve got a guess.

A quick recap of what we just watched, first. Easter finally arrived, and Sister Alice led Emily Dodson (Gayle Rankin), Perry Mason himself (Matthew Rhys) and Della Street (Juliet Rylance) — not to mention a huge procession of believers and skeptics — to the grave of baby Charlie. They dug up the casket, and — surprise! — it was empty.

This led to a scene of chaos, naturally, with everyone having to kinda scrape and claw their way out of there. Alice ended up in a car with her mother Birdy (Lili Taylor). One the way home, they stopped because of another crowd, which was blocking the street. Birdy got out, seemingly expecting this whole scene, and found they had a mysterious baby. She took the baby in her arms and started saying, repeatedly, “Charlie Dodson lives.”

And she told a clearly confused Alice: “This is your miracle.”

That’s where the episode ended. It’s all very perplexing. So let’s try to break it down.

There’s one main question on everyone’s mind: Is that baby at the end actually Charlie Dodson?

It’s hard to say at this point, but I would guess it’s not. And I’m basing that on two things: the fact that “Perry Mason” doesn’t seem like the kind of show to resurrect a dead baby, an interaction that Alice had with Emily last week.

So in the previous episode, Emily and Alice were chatting when Emily asked a big question: when they go to the cemetery to bring back Charlie, would they have to dig up his body? Sister Alice has a very conspicuous physical response to this, looking off into space like she was thinking about something.

It’s the kind of look that you’d get if somebody said something that gave you an idea. And I think the idea Alice had was to dig up the body ahead of time and remove it. This way, you don’t have to address your failure, and you can claim the body’s disappearance as some kind of divine action if you want.

Though it’s not quite as neat as all that. Birdy, who controls everything about Sister Alice’s life, would certainly know if she had the body dug up. And she could then implement her own plan. I don’t think Birdy and Alice were in cahoots on this at all — Alice seemed very nonplussed when Birdy showed her the baby.

I don’t know if this theory is true, but it’s the only one I have right now. Hopefully, we’ll find out next week in the “Perry Mason” season finale.