Al Capone’s treasure trove of heirlooms including semi-automatic Colt he called ‘sweetheart’ and a letter written in Alcatraz to his only child Sonny signed off ‘your dear father Alphonso Capone’ sells for $3.1m

A treasure trove of items belonging to notorious Chicago mobster Al Capone has sold at auction for $3.1million.

The star lot was the gangster’s favorite gun – a 1911 Colt semi-automatic pistol, which he called ‘sweetheart’.

The remarkable collection, sold by his granddaughters, also included personalized jewelry, photographs and furniture and a letter written to his only child Sonny from Alcatraz Prison, which showed a tender side to the ruthless crime boss.

Granddaughter Diane Capone, 77, only knew her grandfather after his release from Alcatraz prison in 1939, following a seven-year sentence for tax evasion.

By then, the 40-year-old Capone was already in failing health and suffering from neurological issues caused by late-stage syphilis.

‘What people don’t know is his personal story as a father and grandfather and his painful path of redemption while at Alcatraz,’ she said.

‘That is the unknown Capone whose story comes to life with these family treasures.’

However, some critics have accused Capone’s granddaughters of profiting off ‘blood money’ and saying they should instead donate the items to a museum. 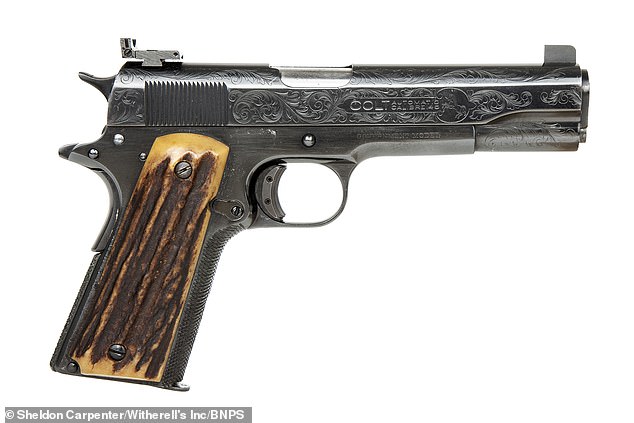 The star lot was the gangster’s favorite gun – a 1911 Colt semi-automatic pistol, which he called ‘sweetheart’. It was expected to fetch around $150,000, but sold for a whopping $1.04million 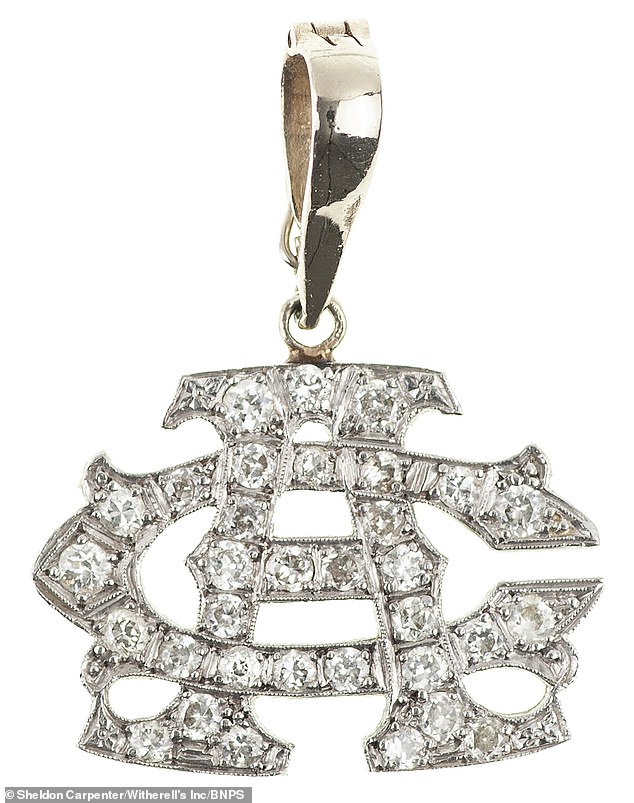 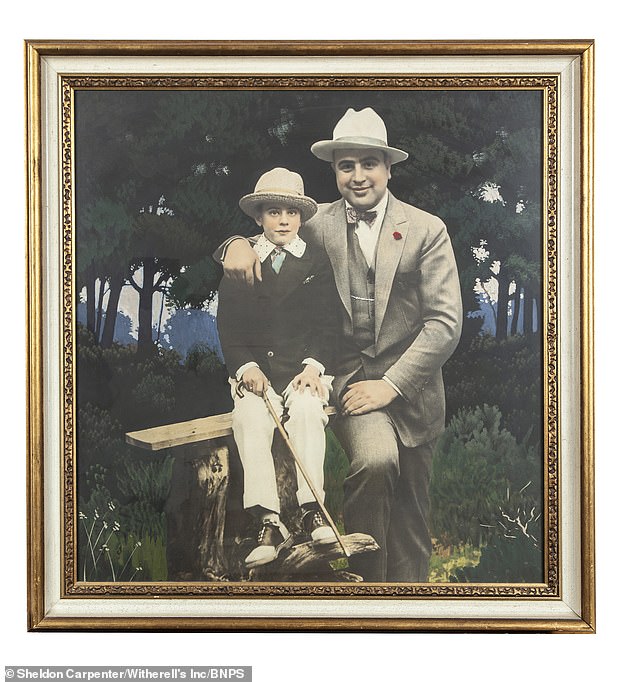 The items were given to Capone’s only child Sonny (pictured with his father in a photograph that was also part of the auction). Sonny then passed the items onto his four daughters

In total there were 175 lots up for sale with Witherell’s of California, US, and the sale made more than four times its estimate.

The handwritten letter from Capone to Sonny while he was locked up in Alcatraz for tax evasion, made $56,700.

Written in October 1939, Capone said: ‘To My Dear Son, Well Son of my heart, here is dear father, who loves you with all my heart and proud to have a son, as smart as you are…

‘Give Mother a nice big kiss for me and God bless you both. Your dear Father Alphonse Capone.’

A photo of the gangster with his wife Mae and their grandchildren on a pier on Christmas Day 1946 sold for $19,360. It was the last picture taken of Capone, who died of cardiac arrest a month later. 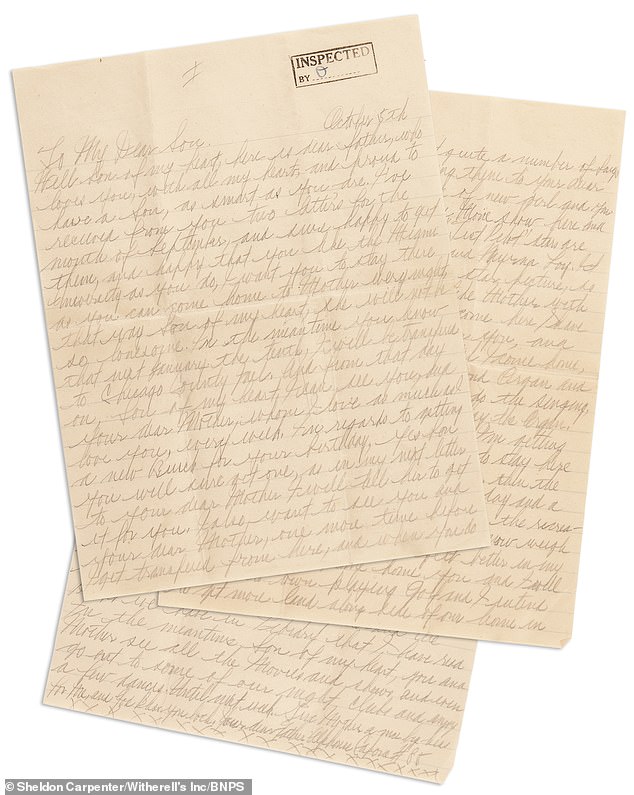 A handwritten letter written from Capone to his son, Sonny, was sent from Alcatraz Prison, and shows a tender side to the ruthless crime boss. It sold for $56,700 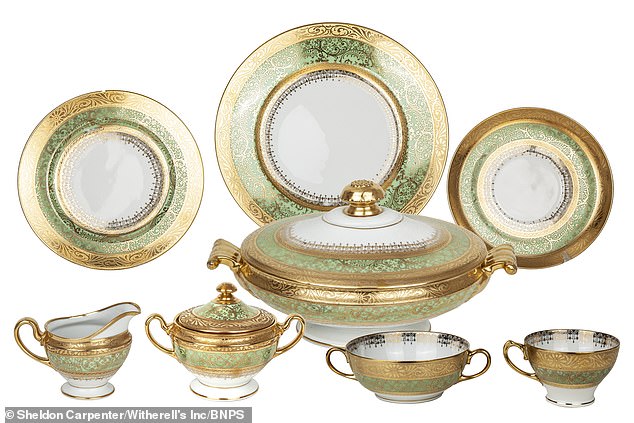 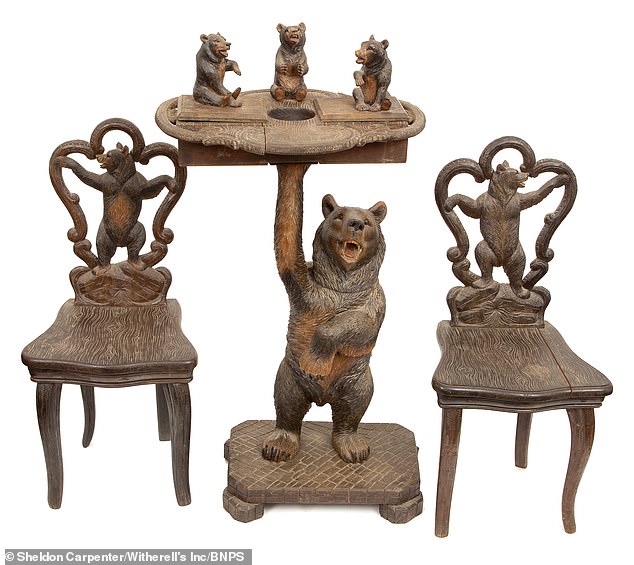 Also included in the sale were items that reflected the Capones’ lavish lifestyle, including a personalized silver tea service, which fetched $15,730, and a platinum and diamond Patek Philippe pocket watch which sold for $229,900.

Witherell’s said the estate was an ‘undisturbed time capsule’ and would no doubt go down as one of the most important celebrity auctions in history.

Mae Capone kept the family’s Palm Island mansion as a shrine after her husband’s death until she sold it in 1952.

The heirlooms were then passed from her to Sonny, before reaching his four daughters.

The women stayed out of the public eye until 2019 when Diane Capone published her book, Al Capone: Stories My Grandmother Told Me.

They decided to sell the items now as there is no one to pass them on to and they were concerned about the recent wild fires in Northern California.

Nine Salarno Besselman, a former California prosecutor who has no connection to Capone, slammed the family for ‘profiting’ off blood money. 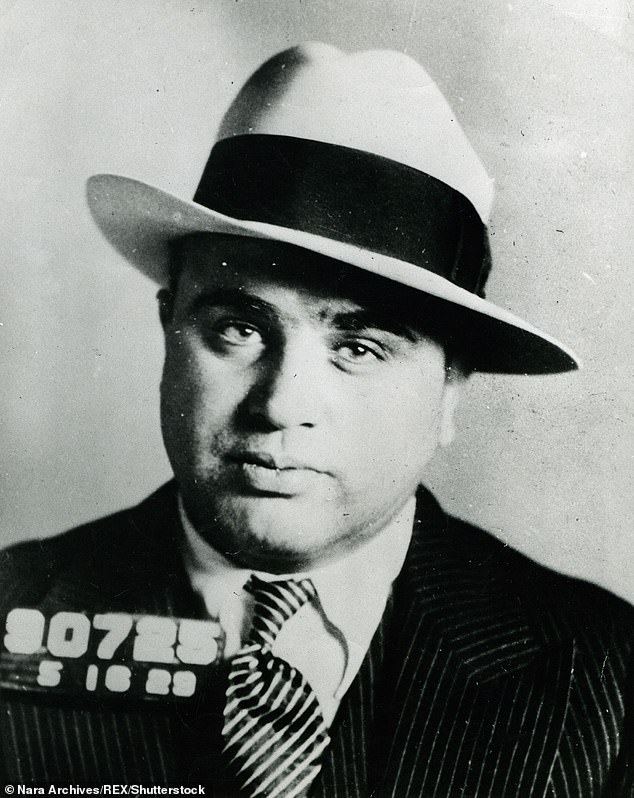 Capone was one of the most feared figures in organized crime during the Prohibition Era, when the sale or production of alcohol was banned in the United States

Diane told CBS she understood the opinion but believed everyone ‘makes mistakes in life.’

Although she had ‘no idea’ if her grandfather was capable of murder, but said she would say ‘I’m sorry’ to anyone who may or may not have been victims of Capone’s alleged violence.

Brian Witherell, co-founder of Witherell’s, said: ‘We are honoured that the Capone family chose us to present their most treasured mementos.

‘It is a unique and special sale as Al Capone is a 20th century phenomenon and this virtual time capsule of heirlooms has been preserved for almost a century.’

Capone was one of the most feared figures in organized crime during the Prohibition Era, when the sale or production of alcohol was banned in the United States.

He is widely believed to be behind the bloody St. Valentine’s Day massacre in 1929 that left seven rival gang members dead.

Born in 1899 to Italian immigrants, the Brooklyn-born Capone became influenced by a life of crime by friend Johnny Torrio.

He earned the nickname ‘Scarface’ in 1917 after getting into an altercation with a man at a bar that left three scars on his face. 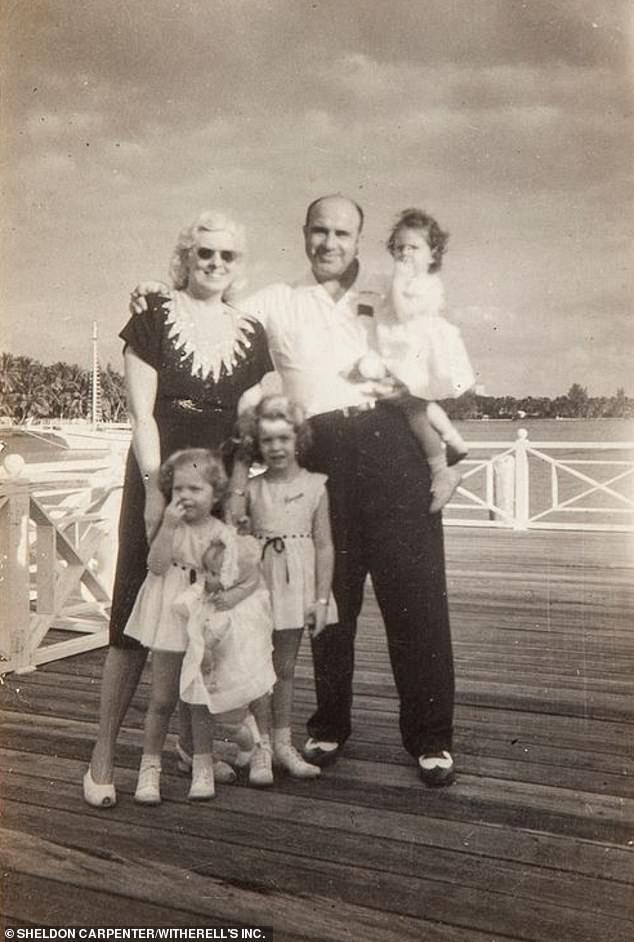 This is the last photo taken of Al Capone with his wife Mae and grandchildren Diane, Barbara and Ronnie 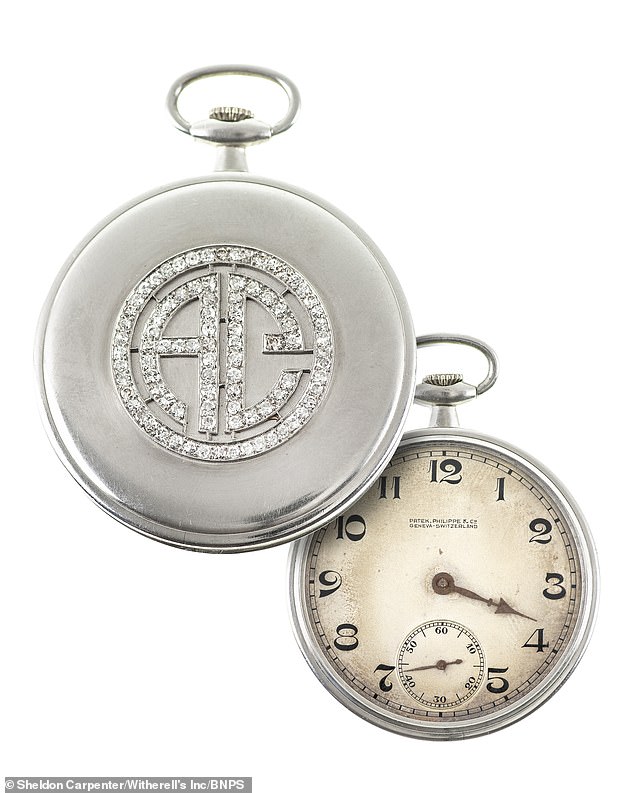 He married his wife Mae Coughlin in 1918 and his son Sonny was born on December 4 of that year.

He was the boss of the Chicago Outfit, a 1920s gang that beat out rivals in bootlegging and racketeering with increasingly brutal methods.

These culminated in the 1929 St Valentine’s Day Massacre, when seven members of a rival gang were executed, resulting in Capone being dubbed ‘Public Enemy Number One’.

He was indicted in 1931 on 22 counts of tax evasion and was sentenced to 11 years in prison.

He ultimately ended up in Alcatraz, a San Francisco island fortress prison in 1934 for seven years.

He died on January 25, 1947, at the age of 48 after developing dementia as a result of a syphilis contraction.

He has been immortalized in film and television on numerous occasions, mostly notably by Robert De Niro in The Untouchables and Stephen Graham in Boardwalk Empire.