Narrow Dauphin Island, a barrier island in Alabama, was swamped by rising seawater and falling rain during Hurricane Sally, which made landfall near Gulf Shores on Sept. 16.

The hurricane dumped as much as 30 inches of torrential rainfall on the heart of Dixie and pummeled the coast with fierce winds. Erosion from Sally gnawed away at beaches and dunes.

Wreckages from fallen trees and splintered homes were scattered about the area south of Mobile, but one piece of debris was cast further than the rest.

While recently looking for seashells on the beach on Padre Island National Sea Shore in Texas, Chrissy Shahankary found a sign from a bed and breakfast on Dauphin Island: 800 miles away.

“As we were going down my husband spotted something floating face down in the water. There’s tons of debris down there. We didn’t know what it could possibly be. So, he goes out in the water and brings it back and it’s this beautiful sign. The only thing that was wrong with it was it was covered in shells and mussels,” Shahankary said. 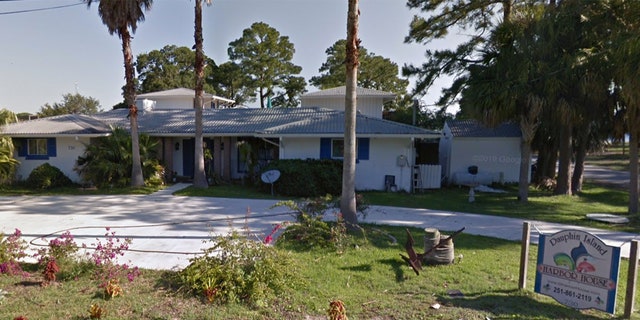 Harbor House is a bed and breakfast on Dauphin Island, a barrier island in Alabama.
(Google Maps)

She found the owners of the business “Harbor House” on social media to let them know of her find.

“She found us on Facebook with our Facebook page and sent me a message that they had found it,” owner Julie Lindsey said.

“I thought it was gone for good. You got to remember, it left here, had to leave here and go down Mobile Bay, out of the sound off Bayou la Batre, in the Gulf of Mexico, around the tip of Louisiana, and then St. Padre,” owner Billy Lindsey added.

Chrissy wanted to take the sign home but it couldn’t fit in her car.

The sign was special to the Lindsey family as it helped drive business from seafarers in boats cruising from the marina.

Chrissy and the Lindsey family are trying to track down the sign, last seen being held by a man at the beach.

“I’m hoping that this gentleman took this sign home and not to the dump. I would love to see Julie get her sign back,” Chrissy said.