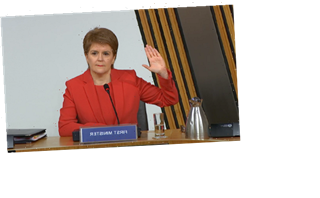 NICOLA Sturgeon denied claims the name of a complainant was leaked to Alex Salmond's chief of staff by a Scottish Government official – as she slammed "absurd" claims there was a plot against her old boss.

The First Minister insisted she wasn’t out to “get” Alex Salmond, and added that her new complaints policy was “absolutely, emphatically not” created to target Mr Salmond.

Ms Sturgeon said “sorry” to women failed by a probe into her predecessor and apologised for a “very serious mistake” made during the investigation.

She stood by claims she first learned of allegations against Mr Salmond on April 2, 2018, while giving evidence to the Scottish Parliament.

The SNP leader said she never heard claims of "sexually inappropriate behaviour" about her old boss prior to November 2017.

On Friday, Mr Salmond said he has "no doubt" that Ms Sturgeon broke the ministerial code – but said it wasn't for him to say if she should resign.

All of the background details you need to know can be found here – and read up with all the news from Friday's hearing in our blog below.