Detective Sergeant Wayne Dean will be the subject of Independent Broad-based Anti-corruption Commission hearings, prompted by information uncovered in the commission’s Operation Bredbo. The hearings will examine allegations Dean exploited his position for personal gain. 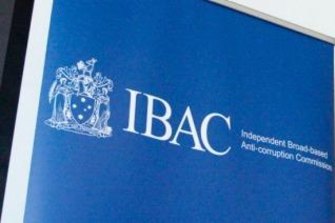 IBAC will investigate a senior police officer over allegations of serious misconduct.Credit:Arsineh Houspian

A joint investigation by The Age and A Current Affair has found IBAC is expected to examine allegations that Dean demanded $20,000 from a travel agency employee, or he would investigate the woman over false claims she had stolen money from the firm.

The corruption watchdog is also expected to investigate claims that Dean accepted international flights from the agency. He has been suspended from duty pending the investigation, Victoria Police confirmed.

The anti-corruption agency will look at allegations Dean engaged in misconduct by “maintaining improper associations and relationships and misusing police information” and attempted to pervert the course of justice by falsifying evidence.

“I’m only aware of a small handful of cases held into police misconduct,” he said.

IBAC Commissioner Robert Redlich, QC, said one of the most important functions of the commission was to independently oversee Victoria Police.

“Victorian communities place great trust in Victoria Police and rightly expect police officers to perform their duties and exercise their significant powers fairly, impartially and in accordance with the law,” he said.

While members of the public and media would not be able to attend the hearings in person, the proceedings will be livestreamed on the anti-corruption commission’s website.

The commissioner would preside over the hearings, as would Deputy Commissioner Stephen Farrow.