Participants travelled from around the country to a Wisconsin Dells resort for a sold-out convention that was, in fact, a sea of misinformation and conspiracy theories about vaccines and the pandemic.

The featured speaker was the anti-vaccine activist who appeared in the 2020 movie Plandemic, which pushed false COVID-19 stories into the mainstream. One session after another discussed bogus claims about the health dangers of mask wearing and vaccines. 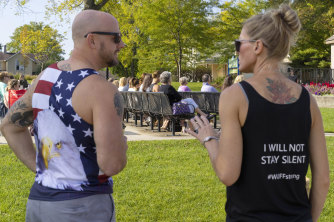 People attend the Chiropractic Society Health Freedom revival Sunday, Sept. 19, 2021 in Oconomowoc, Wis. Public health advocates are alarmed by the number of chiropractors who have hitched themselves to the anti-vaccine movement.Credit:AP

The convention was organised by members of a profession that has become a major purveyor of vaccine misinformation during the pandemic: chiropractors.

At a time when the surgeon general says misinformation has become an urgent threat to public health, an investigation by The Associated Press found a vocal and influential group of chiropractors has been capitalising on the pandemic by sowing fear and mistrust of vaccines. 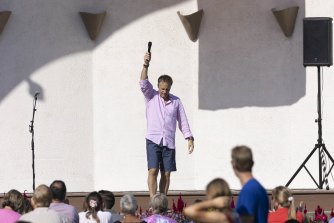 They have touted their supplements as alternatives to vaccines, written doctor’s notes to allow patients to get out of mask and immunisation mandates, donated large sums of money to anti-vaccine organisations and sold anti-vaccine ads on Facebook and Instagram, the AP discovered. One chiropractor gave thousands of dollars to a Super PAC that hosted an anti-vaccine, pro-Donald Trump rally near the US Capitol on January 6.

They have also been the leading force behind anti-vaccine events like the one in Wisconsin, where hundreds of chiropractors from across the US shelled out $299 or more to attend. The AP found chiropractors were allowed to earn continuing education credits to maintain their licences in at least 10 states.

Public health advocates are alarmed by the number of chiropractors who have hitched themselves to the anti-vaccine movement and used their public prominence and sheen of medical expertise to undermine the nation’s response to a COVID-19 pandemic that has killed more than 700,000 Americans.

Australia has not been immune from the trend either, with one Melbourne chiropractor suspended for spouting anti-vax claims. 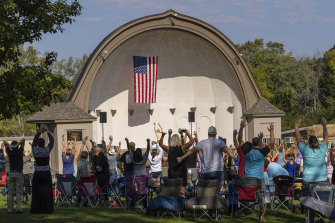 “People trust them. They trust their authority, but they also feel like they’re a nice alternative to traditional medicine,” said Erica DeWald of Vaccinate Your Family, who tracks figures in the anti-vaccine movement. “Mainstream medicine will refer people out to a chiropractor not knowing that they could be exposed to misinformation. You go because your back hurts, and then suddenly you don’t want to vaccinate your kids.”

The purveyors of vaccine misinformation represent a small but vocal minority of the nation’s 70,000 chiropractors, many of whom advocate for vaccines. In some places, chiropractors have helped organise vaccine clinics or been authorised to give COVID-19 shots.

And chiropractic is not the only health care profession whose members have been associated with COVID-19 misinformation: Some medical doctors have spread dangerous falsehoods about vaccines, a problem so concerning that the national group representing state medical boards warned in July that doctors who push vaccine disinformation could have their licences revoked.

But the pandemic gave a new platform to a faction of chiropractors who had been stirring up anti-vaccine misinformation long before COVID-19 arrived, driven by interpretations of 19th century chiropractic beliefs that medicine interferes with the body’s natural flow of energy.

Chiropractic was founded in 1895 by D.D. Palmer, a “magnetic healer” who argued that most disease was a result of misaligned vertebrae. Its early leaders rejected the use of surgery and drugs, as well as the idea that germs cause disease. Instead, they believed the body has an innate intelligence, and the power to heal itself if it is functioning properly, and that chiropractic care can help it do that.

This led many to reject vaccines – even though vaccines are not within their scope of practice. Instead, they treat conditions through spine and musculoskeletal adjustments, as well as exercise and nutritional counselling. A 2015 Gallup survey found an estimated 33.5 million adults had seen a chiropractor in the previous 12 months.

Even before the pandemic, many chiropractors became active in the so-called “health freedom” movement, advocating in state legislatures from Massachusetts to South Dakota to allow more people to skip vaccinations.

Since 2019, the AP found, chiropractors and chiropractor-backed groups have worked to influence vaccine-related legislation and policy in at least 24 states. For example, an organisation started by a chiropractor and a co-owner of a chiropractic business takes credit for torpedoing a New Jersey bill in early 2020 that would have ended the state’s religious exemption for vaccines.

Then the pandemic hit, creating new avenues for profit.

The first complaint the Federal Trade Commission filed under the COVID-19 Consumer Protection Act was in April against a Missouri chiropractor. It alleges he falsely advertised that “vaccines do not stop the spread of the virus,” but that supplements he sold for $24 per bottle plus $9.95 shipping did. He says he did not advertise his supplements that way and is fighting the allegations in court.

Nebraska chiropractor Ben Tapper landed on the “Disinformation Dozen,” a list compiled by the Center for Countering Digital Hate, which says he is among the small group of people responsible for nearly two-thirds of anti-vaccine content online. Tapper went viral with posts downplaying the dangers of COVID-19, criticising “Big Pharma,” and stoking fears of the vaccine.

Tapper said he has been called a “quack” and lost patients, and that Venmo and PayPal seized his accounts. In his view, the public is being told that they need a vaccine to be healthy, which he doesn’t believe is true. He said vaccines have no place in what he calls the “wellness and prevention paradigm.”

“We’re trying to defend our rights,” Tapper told AP, when asked why so many chiropractors are involved in the anti-vaccine movement. “We’re defending our scope of practice.”

Another chiropractor, who has frequently appeared on the right-wing show operated by conspiracy theorist Alex Jones to sell supplements, was also a donor to an organisation that was behind the anti-vaccine demonstration on January 6.

It’s unclear how widespread anti-vaccine sentiment is in the ranks of chiropractors, but there are some clues.

Stephen Perle, a professor at the University of Bridgeport School of Chiropractic, recently surveyed thousands of chiropractors across the United States. He said his and other surveys show that less than 20 per cent of chiropractors have “unorthodox” views, such as opposition to vaccines. Perle called that group an “exceedingly vocal, engaged minority”.

AP could find no national numbers of vaccination rates among chiropractors, but Oregon tracks vaccine uptake among all licensed health providers, and the numbers show chiropractors and their assistants are by far the least likely to be vaccinated – and far less than the general public.