AN APPARENT Antifa mob who were dressed in black and carrying shields marched on New York City to demand that Donald Trump leaves the White House now.

Photographs showed a huge army of the infamous protesters marching through Times Square on Sunday.

While the majority of the far-left marchers were draped in all black, carrying shields and wearing helmets and gas masks, some were seen in their own clothes.

One disrespectful protester was dressed as a police officer while wearing a pig's head mask, pointing a microphone at different members of the NYPD.

A Black Lives Matter flag was spotted, alongside a placard that called for "Trump Lost! Fascists Get Out!" and "Trump/Pence Out Now."

An Antifa group in New York claimed that the march was an "anti-fascist victory" and gloated that "MAGA and the Proud Boys didn't show up because we mobilized," according to the Daily Mail.

The march came just days after hundreds of unruly protesters took charge at the Capitol building after Trump repeated his unfounded claims of election fraud to thousands of rallying demonstrators.

Trump supporters scaled the walls of the Capitol building, breached barricades, and advanced into the halls of the iconic building, smashing windows and brawling with cops.

The Capitol, in Washington DC, was placed under lockdown as a result, as rioters entered the second-floor lobby of the building right outside the Senate chamber.

With drawn guns and tear gas, police sought to clear the Capitol building of hundreds of protesters who stormed the building and sought to force Congress to undo Trump’s election loss as lawmakers convened to certify President-elect Joe Biden’s victory. 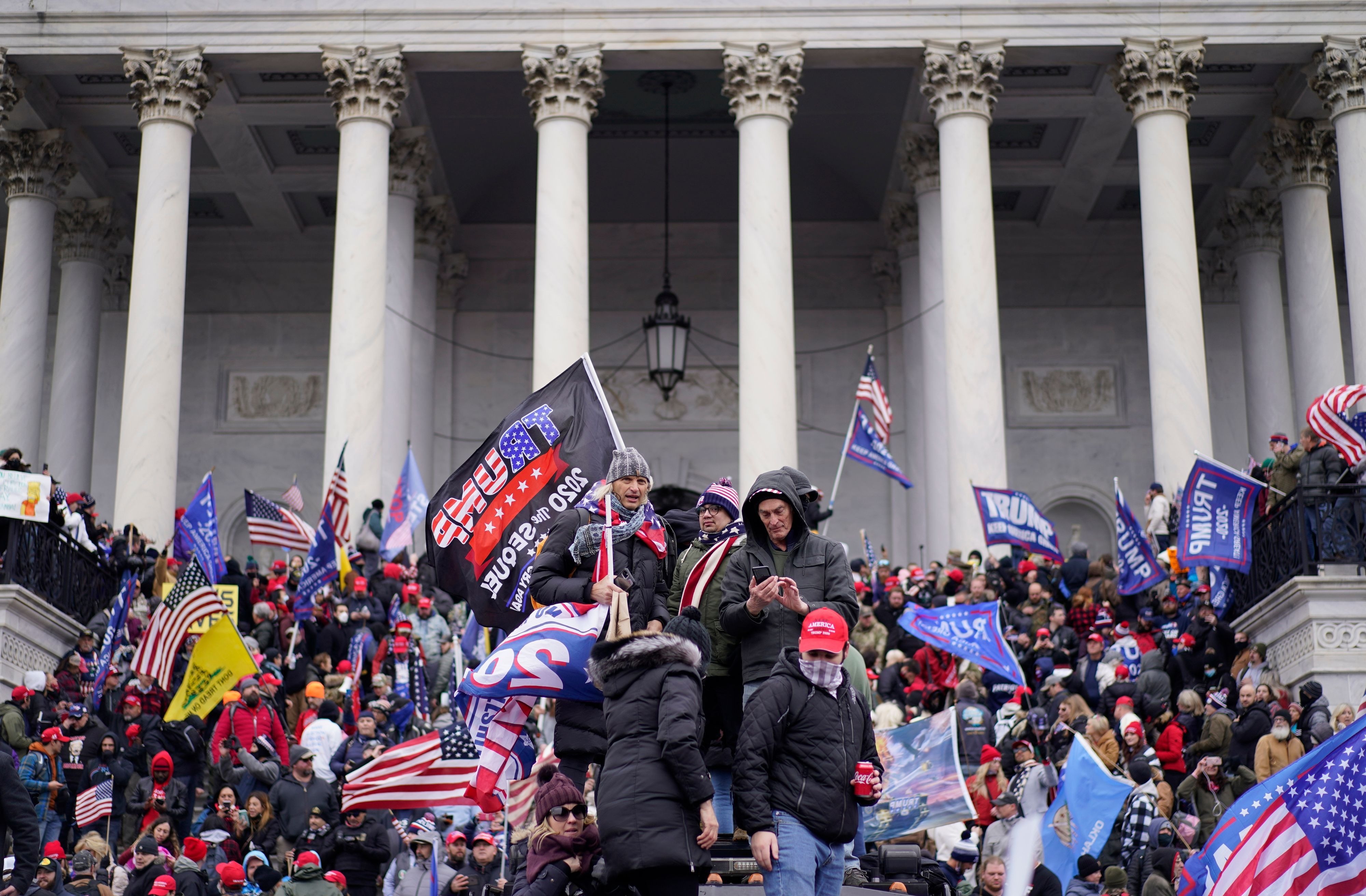 Security officers in dark suits drew their pistols and trained them on the shouting mob trying to smash their way through the door of the normally sedate House of Representatives chamber.

Five people have so far died as a result of the violence, while others remain in critical condition in hospital.

Experts have since warned that a small minority of Trump-supporting activists are calling for more demonstrations ahead of Biden's inauguration.

And on Saturday evening, a post was added to Parler, a social media site that has often proved to be a favorite of MAGA supporters.

While the majority of Trump supports have condemned last weeks violence in Washington, some extremists are still trying to stir up trouble.

The post urged people to attend a proposed march on Capitol Hill and state capitol buildings on January 17.

A poster is emblazoned with the phrase: "When democracy is destroyed, refuse to be silenced."

It calls for an "armed march on Capitol Hill and all state Capitols."

The poster, added by user Kenneth Brooks, finished by saying: "Don't let their efforts be in vain. Demand freedom. End the corruption. Stand up for liberty."

Suzanne Somers, 74, lists her massive Palm Springs mansion for $8.5M
We and our partners use cookies on this site to improve our service, perform analytics, personalize advertising, measure advertising performance, and remember website preferences.Ok