New York: With coronavirus infections rising and a contagious new variant threatening to accelerate the pandemic, France has implemented a stringent 6pm-to-6am curfew. Citizens nationwide are sequestered indoors, and businesses must close down.

In Quebec, Canadian officials imposed a similar restriction earlier this month, running from 8pm to 5am. It has frayed nerves: Notably, a woman who was walking her boyfriend on a leash at 9pm has argued that this was permitted during the curfew, surely one of the pandemic’s most unexpected moments. 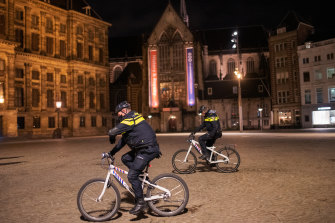 Police officers patrol a street in Amsterdam, Netherlands, where an emergency nighttime curfew has been introduced for the first time since World War II. Credit:Getty Images

The question for scientists is this: Do curfews work to slow transmission of the virus? If so, under what circumstances? And by how much?

A curfew requires people to be indoors during certain hours. It is often used to quell social unrest — many cities imposed curfews during the George Floyd protests this summer — and following natural disasters or public health emergencies.

But curfews also have been used as instruments of political repression and systemic racism. Decades ago, in so-called sundown towns in the United States, black people were not permitted on the streets after dusk and often were forced to leave altogether.

As the pandemic unfolded, Melbourne, and many European countries imposed curfews, on the theory that keeping people at home after a certain hour would slow viral transmission. Usually curfews were implemented alongside other measures, like closing businesses early and shuttering schools, making it difficult to tease out the curfew’s effectiveness. 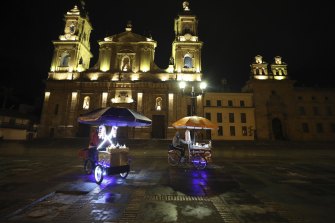 Street vendors leave Bolivar Square at the start of an official continuous multi-day curfew in an effort to contain the spread of coronavirus infections, in Bogota, Colombia on Friday.Credit:AP

The scientific evidence on curfews is far from ideal. There has not been a pandemic like this one in a century. While curfews make intuitive sense, it’s very hard to discern their precise effects on viral transmission, let alone transmission of this coronavirus.

Ira Longini, a biostatistician at the University of Florida, believes that curfews are, on the whole, an effective way to slow the pandemic. But he acknowledged his view is based on intuition.

“Scientific intuition does tell you something,” Longini said. “It’s just that you can’t quantify it very well.”

Maria Polyakova, an economist at Stanford University, has studied the effects of the pandemic on the US economy.

“In general,” she said, “we expect that staying at home mechanically slows the pandemic, as it reduces the number of interactions between people.”

“The trade-off is that the reduction in economic activity especially hurts many workers and their families in the large service sector of the economy,” she added.

So is the curfew worth the price?

She is at a loss to understand the logic.

“Assuming that nightclubs and such are already closed down anyway, for instance, prohibiting people from going for a walk around the block with their family at night is unlikely to reduce interactions,” Polyakova said.

Moreover, the virus thrives indoors, and clusters of infection are common in families and in households. So one daunting question is whether forcing people into these settings for longer periods slows transmission — or accelerates it.

“You can think of it like this,” said William Hanage, a public health researcher at the Harvard TH Chan School of Public Health, “what proportion of transmission events happen during the time in question? And how will the curfew stop them?”

One study, published recently in Science, analysed data from China’s Hunan province at the start of the outbreak. Curfews and lockdown measures, the researchers concluded, had a paradoxical effect: These restrictions reduced the spread within the community but raised the risk of infection within households, reported Kaiyuan Sun, a postdoctoral fellow at the National Institutes of Health, and his colleagues.

Longini and his colleagues incorporated lockdowns and curfews into models of the pandemic in the United States and concluded that they can be an effective way to reduce transmission.

But, he cautioned, models come with a lot of assumptions about the population and how the virus spreads.

Jon Zelner, a public health researcher at the University of Michigan, said that there was too little scientific data to know whether curfews are effective, but that such coercive measures rarely work in the long run.

“With respect to curfews, I think that it is hard to understand what the positive impact of them is going to be,” he said. “One of the things I worry about with relatively vague or poorly reasoned orders is that it erodes the trust people need to have to follow these.”

In countries like Japan, which have a much lower incidence of COVID-19 than the United States, the secret seems to be a population that accepts and follows guidelines like social distancing and mask wearing, “rather than a series of rule-like restrictions” like curfews.

That could have happened in the United States, Zelner said, but public health recommendations were “drawn into our broader set of unending cultural and political conflicts.”