Australia is set to acquire its first fleet of highly prized nuclear-powered submarines as part of a historic new defence pact proposed by Scott Morrison to Joe Biden and Boris Johnson to counter China’s growing influence in the Indo-Pacific.

The ambitious AUKUS alliance is being hailed as Australia’s most significant strategic move in decades. 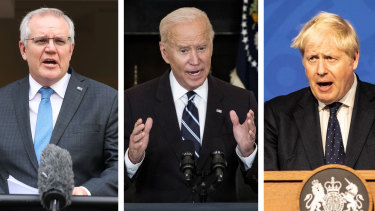 The partnership will be launched by the leaders of the United States, Australia and Britain in a joint virtual news conference early on Thursday morning (AEST) and will be signed by the trio in Washington DC next week.

AUKUS is expected see Australia tear up the controversial $90 billion deal with French submarine maker Naval Group that the Turnbull government struck in 2016.

That deal was to build 12 diesel-electric submarines and was reaffirmed in person by Morrison to French President Emmanuel Macron just two months ago, despite having already blown out in costs by at least $40 billion and running a decade behind schedule.

Scrapping that deal could cost taxpayers $400 million and anger Macron. Naval Group said it had no comment when contacted.

Instead, the United States will share its closely guarded nuclear submarine secrets with Australia, making it the only other country to have access to the highly prized technology besides Britain, which secured access in 1958 after years of negotiation.

The announcement is a major coup for Australia, which pushed hard for access to America’s nuclear submarine technology. 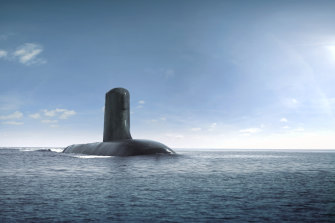 Australia’s program to build an attack-class submarine fleet has been plagued by cost blowouts and delays.Credit:Naval Group

It will allow Australia to field nuclear-powered submarines that will easily link with American and British submarines across the region.

“This is a fundamental decision – it binds decisively Australia to the United States and Great Britain for generations,” a senior Biden administration official said in a briefing call.

“It is the biggest strategic step Australia has taken in generations.”

“While we may be separated geographically, our interests and values are shared,” he said.

“The AUKUS alliance will bring us closer than ever, creating a new defence partnership and driving jobs and prosperity.

“This partnership will become increasingly vital for defending our interests in the Indo-Pacific region and, by extension, protecting our people back at home.”

Britain said the scoping phase of the new submarines for the Royal Australian Navy would take 18 months and the design and build would create hundreds of scientific and engineering jobs in the UK.

The leaders said in a joint statement that the new nuclear submarines would come online at the “earliest achievable date”. It is not yet clear if the first submarine will be ready this decade.

Nuclear-powered submarines are considered more potent than conventional submarines because they operate more quietly and can last for longer periods in the ocean. They are essentially undiscoverable because they do not need to expel exhaust gases.

American officials said the three countries had agreed to identify the “optimal pathway” to deliver the nuclear submarine technology to Australia within the next 18 months.

Other capabilities are expected to be added. Political and military leaders from Australia, the US and UK will hold regular meetings as part of the partnership, deepening the close relationship that already exists via the elite Five Eyes intelligence-sharing network.

The US administration official said: “I think this is an historic announcement and it reflects the Biden administration’s determination to build stronger partnerships to sustain peace and stability across the entire Indo-Pacific region. This new architecture is really about deepening co-operation on a range of defence capabilities for the 21st century.”

The official said that Biden did not explicitly discuss the new partnership in a telephone call last week with Chinese President Xi Jinping.

While the three governments stressed the announcement was not aimed at any particular country, Eric Sayers, an expert in Asia-Pacific security policy at the American Enterprise Institute, said: “This is solely and 100 per cent about China and we should stop pretending it is anything else. There are no ifs, ands or buts about it.”

Sayers said the US and UK were inviting Australia into an exclusive club by agreeing to share such a “highly sensitive technology” as nuclear propulsion.

“This is a significant step by the US and UK to empower one of our closest allies in Asia with an advanced capability that doesn’t just get offered to anyone,” he said. “This is one of the most special and unique ways that countries can co-operate.”

Sayers said a decade would be a realistic but still ambitious timeline for the submarines to be fully operational.

Defence Minister Peter Dutton met with US Defence Secretary Lloyd Austin at the Pentagon on Thursday (AEST) ahead of meetings the following day alongside Foreign Minister Marise Payne and Secretary of State Anthony Blinken.

The annual Australia–US Ministerial Consultations (AUSMIN) meeting will be followed by Morrison’s visit to Washington next week for meetings with Biden and the other leaders of the “Quad” nations.