Australian coal exports to China have been formally blocked after months of import restrictions that have thrown the $14 billion export industry into turmoil.

The decision, taken by China's National Development and Reform Commission at a meeting with 10 Chinese power plants on Saturday and reported by state media on Monday, means Australian coal will be blocked indefinitely while China ramps up imports from Mongolia, Indonesia and Russia, and expands local production. 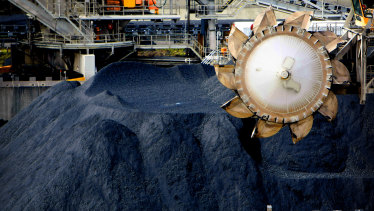 Coal exports are under pressure on multiple fronts. Credit:Glenn Hunt

China's international state media outlet, The Global Times, reported the commission had given approval to power plants to import coal "without clearance restrictions, except for Australia, in a bid to stabilise coal purchase prices".

China's spot coal prices have risen above $US90.82 ($120.17) per tonne compared to $US62.82 per tonne for Australian coal as it restricts imports to protect local producers. The decision aims to reduce the price for state-linked firms as Beijing continues to punish Australia economically for its push for a coronavirus inquiry, and criticism of China's human rights records and national security legislation.

The official report is the most direct statement to date of an outright ban on Australia's third largest export to the country. In October state-owned energy providers and steel mills were given verbal instructions to stop importing Australian coal.

At the time, the Chinese customs office did not state there was an outright ban but said it would "further strengthen import supervision" on Australian goods.

Then in November, China's Coal Transportation and Distribution Association signed a three-year deal to increase purchases of Indonesian coal.

More than $700 million in Australian coal shipments have been stuck off the coast of China.

“We’re not selling from Australia at the moment, as you well know, they’re not discharging Australian coal, but we are selling from other destinations,” he said.

“China will still import about 185 million tonnes of thermal coal this year, which is similar to last year. So what Australia is losing is coming from other sources of supply.”

The formal ban will now put pressure on Australian exporters and the government to find other markets.

India has accounted for the bulk of the non-China demand for Australian high-ash coal in recent months, according to Argus industry analysis, while other shipments are expected to be diverted to Japan, Pakistan and South Korea.

Iron ore is Australia's largest export to China. The $80 billion-a-year export has so far been unaffected by the diplomatic dispute that now covers more than $20 billion in trade, because Australia is the dominant world exporter.

"China does depend a lot on our iron ore and we've got high quality product. So the relationship I'd say is valuable to both us," Husic said. "What Matt Canavan is trying to do in increasing the price of our iron ore is to encourage China to look elsewhere for iron ore."

The coal trade block is a double-threat to the fossil fuel industry as the Coalition comes under increasing pressure over its climate change commitments.

Prime Minister Scott Morrison was blocked from speaking at a United Nations climate summit over the weekend due to a lack of climate ambition.