A manhunt was underway in Baltimore on Thursday after a longtime Maryland Transit Administration (MTA) bus driver was shot to death near a busy commuter corridor, according to reports.

Marcus Parks, 51, a 20-year veteran of the MTA, died at the scene, FOX 45 of Baltimore reported. Police have not released a description of the suspect, who was still at large.

Transit officials and city and state leaders condemned the shooting and called for an end to what they described as "these senseless acts of violence."

"Attacking an essential worker during a global pandemic is the epitome of depravity," Mayor Bernard C. "Jack" Young wrote on Twitter following the attack. "We must have an end to these senseless acts of violence and as a city, we must find other ways to cope instead of resorting to violence."

Authorities said Parks stopped his bus around 10:30 a.m. to let off passengers at the edge of the Jonestown neighborhood, when the gunman approached and tried to board, according to FOX 45.

After Parks refused to allow the suspect to board, the man grabbed the bus driver's bag and took off, reports said. Parks chased after him and the man opened fire.

A nearby witness, identified as Teddy Knight, saw a man tumble over a playground fence. 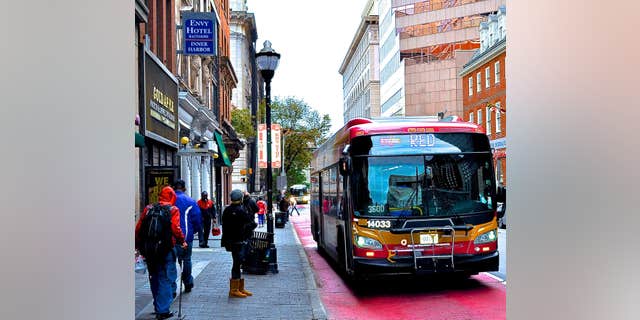 “He tumbled, and that was it. He didn’t move,” Knight told the Baltimore Sun. “He was laying there and the guy came back and shot him again.”

Knight said the suspect stood over the driver and fired several more shots before running off, carrying a black bag, according to the paper.

"Mr. Parks was a personal friend and will be remembered as a dedicated public servant and a true hero to the residents of Baltimore City," Mayor Young added. "My thoughts and prayers are with his family during this difficult time. May his memory be a blessing."

Maryland Gov. Larry Hogan called the death a "senseless killing" of a frontline worker during the coronavirus pandemic. He offered his full support to assist the Baltimore police in catching the suspect.

"We are horrified by the senseless killing of an @MTAMaryland bus operator this morning—one of our frontline essential workers who was just doing his job," Hogan wrote on Twitter. "We pray for his family and those who loved him, and offer our full support to @BaltimorePolice for the investigation."

"MDOT MTA is forever grateful for his commitment to the residents of Baltimore," Quinn said. "Our thoughts and prayers go out to his family in this most difficult time."