The Bank of England’s deputy governor has warned that Britain will have to face a reckoning over high public spending on coronavirus support, such as the furlough scheme.

Ben Broadbent said resilient household spending has been ‘funded by tomorrow’s taxpayers’ as he warned over the impact of the furlough scheme on UK public finances.

In an online webinar speech, the top policy-maker said the mammoth Government spending to support the economy and workers through the pandemic had helped buoy consumer spending, but was ‘no free lunch’.

The furlough scheme has been the ‘single most important factor’ in helping protect household income from the hit to the wider economy, according to Mr Broadbent. 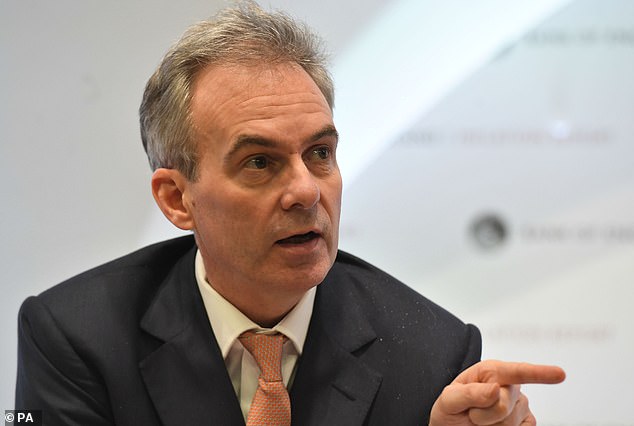 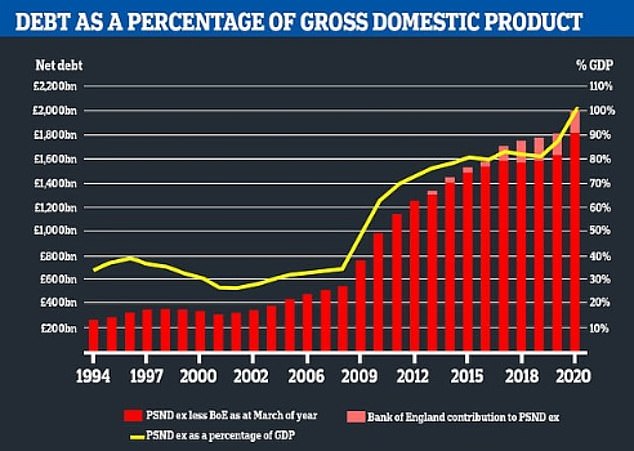 He said: ‘Spending by today’s consumers has in part been sustained and funded by tomorrow’s taxpayers.’

‘This isn’t a free lunch – higher Government debt has to be paid for eventually,’ he added.

It comes after Chancellor Rishi Sunak told MPs on Monday the nation’s public finances ‘have been badly damaged and will need repair’ due to more than £280 billion of Government spending to support the economy.

Mr Sunak also gave a stark warning that the economy will ‘get worse before it gets better’ given the latest lockdown.

Mr Broadbent – deputy governor for monetary policy, who sits on the Bank’s interest rate setting committee – said the economy was now expected to contract in the first quarter of 2021.

Following a predicted contraction of gross domestic product (GDP) – a measure of the size of the economy – in the final three months of 2020, this would see the UK enter into a double-dip recession. 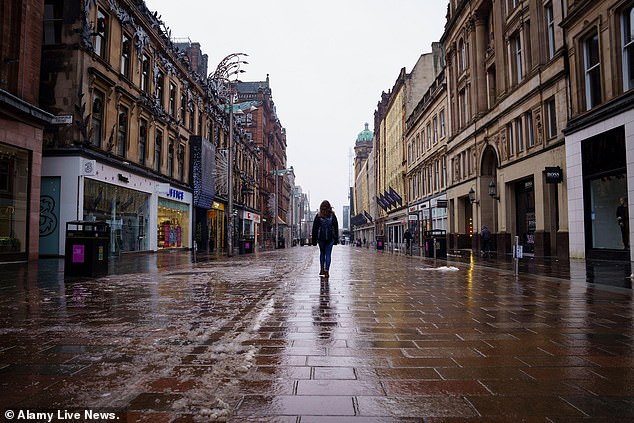 High streets have been deserted as households switched spending from physical shops to online, as well as from areas seen as being risky in the pandemic to less risky alternatives. Pictured: Glasgow city centre

Mr Broadbent said ‘GDP growth may have been the weakest on record but retail spending growth is just about the strongest’.

The furlough scheme launched last March when the first lockdown began have helped maintain the spending side of the economy.

‘This has been done only at the expense of a material rise in public-sector debt, something that will have to be paid for over time,’ he said.

Households switched spending from physical shops to online, as well as from areas seen as being risky in the pandemic to less risky alternatives – such as from restaurants to takeaway. 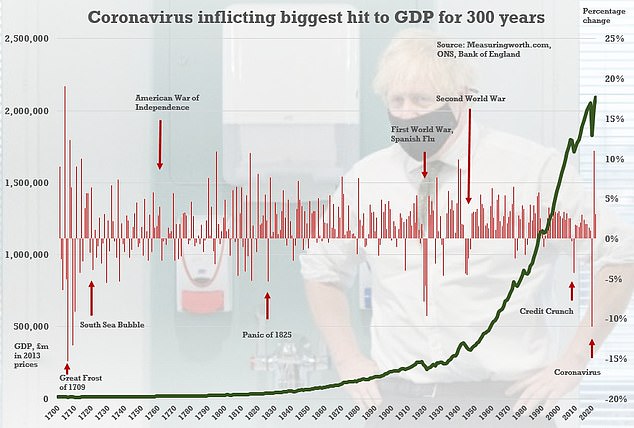 He said the shifts in spending and resilience meant inflation – currently running at 0.3% – had weakened less than the Bank expected.

The Government has spent £46 billion so far on supporting wages for those unable to work during the pandemic and extended the furlough scheme until the end of April.

While hugely costly, Mr Broadbent said it had been key in propping up the economy.

‘The decline in aggregate consumer spending would almost certainly have been more protracted and more widespread – affecting not just activities that involve infection risk but those that do not – but for the furlough schemes,’ he said.

How the government’s coronavirus costs are set to top £300billion

Cost of the response for 2020-21 as given by Chancellor Rishi Sunak at the Spending Review in November.

Includes support for the NHS and other public services, plus test and Trace and ‘moonshot’, as well as furlough and self-employed schemes, tax relief and extra funding for devolved administrations.

Estimated cost of extending the furlough for another month to the end of April, announced in December.

The predicted cost of grants for businesses announced today for the third national lockdown, plus a discretionary fund for local councils to deploy.

The NAO’s estimate of the cost of Bounceback loans that will not be repaid due to fraud or insolvency.

Public sector funding for the coronavirus response already allocated to next year.

Additional borrowing expected in 2020-21 as a result of lost tax revenue due to the economic slump.

The costs of extra unemployment and other benefits due to the pandemic.