Barrister who called woman a 'stroppy teenager of colour' is sacked

A barrister has been expelled from his chambers for calling a black girl a ‘stroppy teenager of colour’.

Jon Holbrook had been commenting on the case of Ruby Williams, who won £8,500 in an out-of-court settlement from her school for alleged discrimination.

Teachers had sent her home because of her Afro hair. Her case was brought by the Equality and Human Rights Commission under the Equality Act in 2018 and featured in a video. 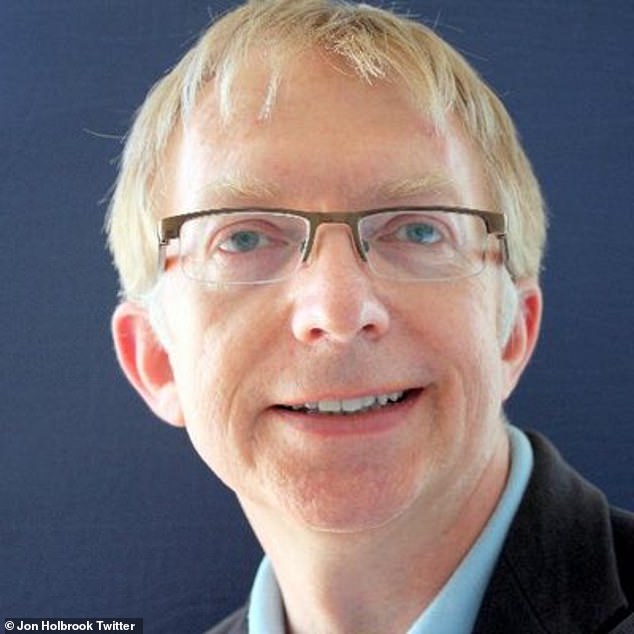 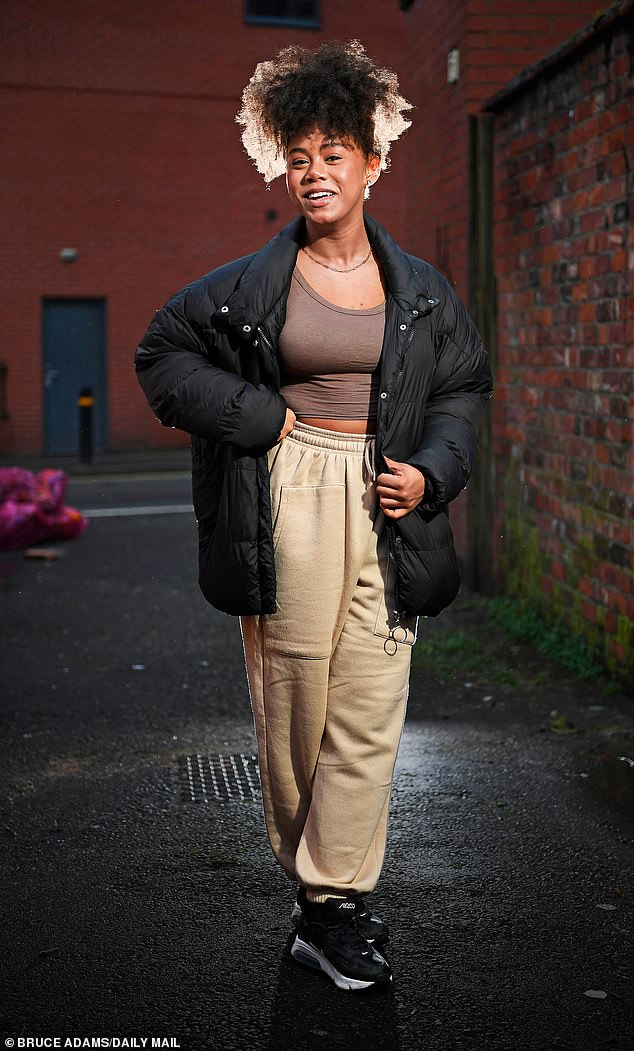 Student Ruby Williams,19, pictured in Fallowfield, Manchester. She said: ‘I am pleased that the chambers have taken this seriously and acted so quickly’ 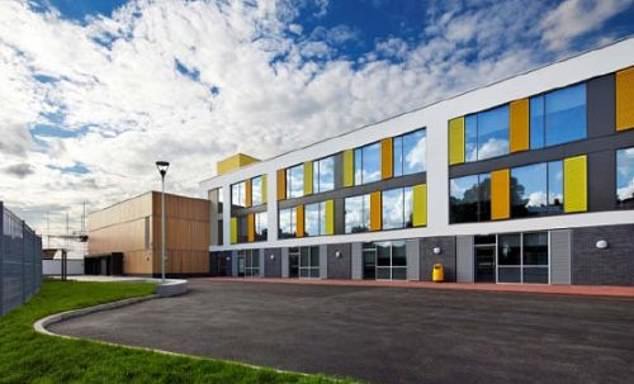 Miss Williams was repeatedly sent home from Urswick School in Hackney, east London, over a period of more than three years, starting in 2014 when she was just 14

But in a tweet about it Mr Holbrook said: ‘The Equality Act undermines school discipline by empowering the stroppy teenager of colour.’

Cornerstone Barristers yesterday ended Mr Holbrook’s association with their chambers after he refused to take down the offending online posts from January 17.

Miss Williams, now 19 and a student at the University of Manchester, told the Daily Mail last night: ‘I am pleased that the chambers have taken this seriously and acted so quickly.

‘I’m not against people expressing their opinions but it was unfair for him to talk about what I went through at the age of 14, and to call me a “stroppy teenager of colour” for simply calling out a discriminatory policy.

‘I was not surprised at all when he said that, actually. I know there are lots of people out there who have those thoughts. But he had such confidence to say what he did publicly, even with the position that he holds. 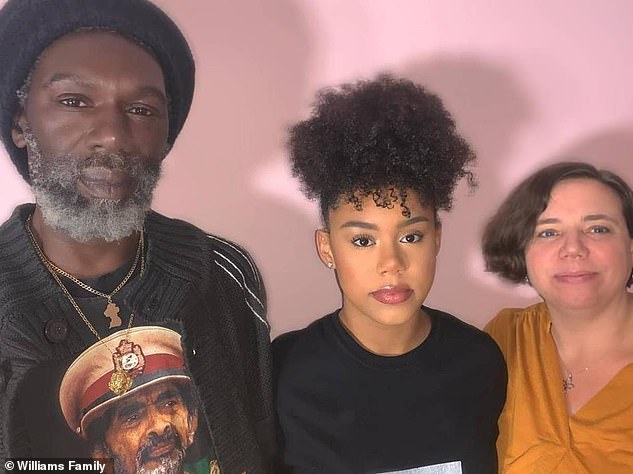 Jon Holbrook commented on the case of Ruby Williams (seen with her parents Kate and Lenny), now 18, who was awarded £8,500 following an Equality Act case against her school in east London

‘I had hoped he would take it down and possibly even apologise. He has now written two articles continuing to challenge the validity of my case.’

Members of Cornerstone Barristers voted to expel Mr Holbrook with effect from today. In a statement they said his comments were ‘irreconcilable with membership’.

Miss Williams was repeatedly sent home from Urswick School in Hackney, east London, over a period of more than three years, starting in 2014 when she was just 14.

She was constantly policed by staff over her hair, according to her father Lenny.

The school had previously said Afro hair, including buns, should be of ‘reasonable size and length’. But following a complaint, the guidelines now say only that hairstyles should be ‘reasonable and should not impact on other students’.

After the case was settled the school’s governors said they were ‘hugely distressed if any child or family feels we have discriminated against them’, adding: ‘We do not accept that the school has discriminated, even unintentionally, against individual or groups.’

Mr Holbrook said he had resigned before the decision to expel him. 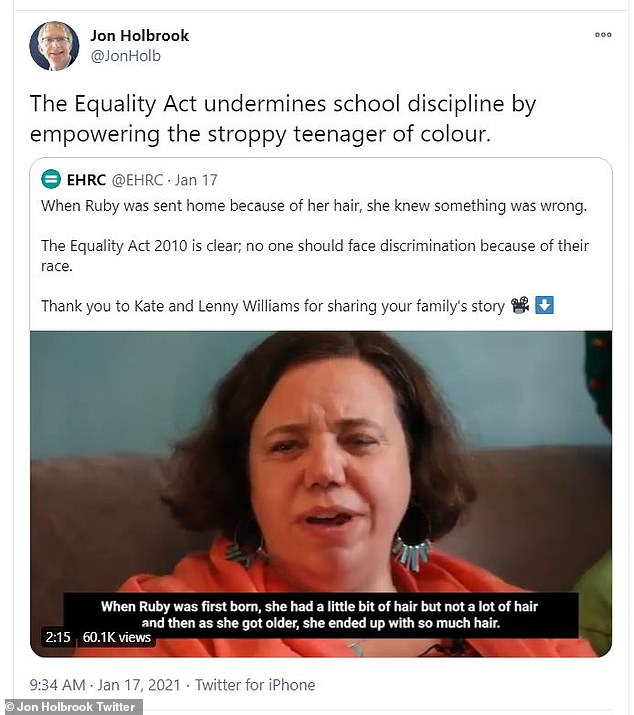 Mr Holbrook, who was called to the Bar 30 years ago, retweeted a post by the Equality and Human Rights Commission which referred to the case on January 17.  He said: ‘The Equality Act undermines school discipline by empowering the stroppy teenager of colour’

He said: ‘I don’t accept that a policy premised on reasonableness should be outlawed as discriminatory. ‘Those, like Ruby’s parents, who advocate a particular political view must accept the right of others to criticise it. Equality laws put considerable force on schools to accommodate cultural differences.’

In an article for The Critic , Mr Holbrook wrote: ‘The only reason that chambers proceeded to expel me, despite my resignation, was because the salivating attack dogs wanted some red meat to chew.

‘Chambers was compliant enough to jump to their barking but it made no difference to me – save to enhance my reputation as a free speech advocate.’

He said he would now do pro bono work, via the Free Speech Union, for anyone similarly ‘cancelled’ in their workplace.

Miss Williams said: ‘Afro hair is a protected characteristic. We want the choice to wear our natural hair – like everybody else – without being judged.

‘I don’t know what people thought went on that makes them call me ‘stroppy’. He seemed so proud to say it, showing how much privilege someone has to write whole articles on a topic they know nothing about. I’m just fighting for the same school rules that others have.’