BEL MOONEY: Mary Wollstonecraft statue evokes NONE of her brilliance

A monument to naked idiocy: A new statue celebrating the icon of feminism Mary Wollstonecraft will have schoolboys sniggering and evokes NONE of her brilliance, rages BEL MOONEY

This is the year we’ll remember as the time of falling statues — when mobs with no understanding of history chose to impose their ignorance and bigotry on the rest of us.

They tore statues down because they knew nothing about the complex reality of the people they represented.

How ironic, therefore, that £143,000 has been spent on erecting a new statue in London, celebrating 18th-century writer and thinker Mary Wollstonecraft — and imposing on us a bizarre work by a female sculptor who also appears to lack understanding of her subject or the times she lived in.

What a marvellous idea it seemed, to raise funds for a work of art to commemorate the woman who wrote her great manifesto, A Vindication Of The Rights Of Woman, in 1792 — a whole century before the suffragette movement raised its banners. 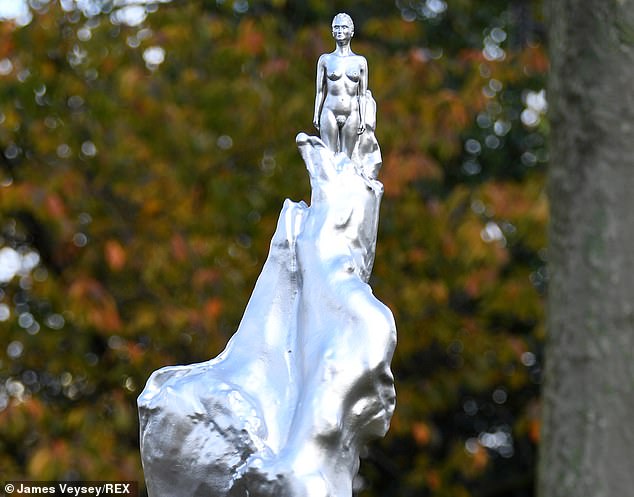 About 90 per cent of statues in London show men; here was one that would serve to inform passers-by about an unjustly forgotten champion of female education and equality. The ten-year campaign for the statue gained many supporters, among them TV presenter Anita Rani, who described Wollstonecraft as, ‘someone who just never gave up, she always fought for others, she was a badass — and it cost her’.

There we go again — the failure to understand history. Far from being a ‘badass’ (an American cliché) who ‘never gave up’, Wollstonecraft piteously begged her first lover (Gilbert Imlay, the father of her first child) for love and attention, and — neglected and ill-treated by him — tried to kill herself more than once. But never let painful, complex facts get in the way of propaganda.

The new 10ft sculpture, by controversial artist Maggi Hambling, is cast in silvered bronze and features a small, naked woman emerging from an amorphous swirl of other dehumanised female bodies.

Her legs are still ‘stuck’ in the mass; her body looks toned by an expensive gym membership; the graphic modelling of her pubic hair resembles half a cabbage.

It’s easy to imagine schoolboys sniggering at yet another provocative image of a woman made vulnerable by nakedness.

Hambling (and the statue committee) are telling their critics the statue is not ‘of’ the great pioneer of human rights, but ‘for’ her.

So how does this work evoke a complicated, contradictory woman who defied convention yet suffered the ordinary longing and pain of other women?

The answer is — it does not. It is that fact that bothers me as much as the nakedness of the statue.

The interpretation of Wollstonecraft as a diminutive, silvery and rather smug-looking sylph says nothing about the sometimes infuriating, sometimes inspiring bohemian revolutionary who was forgotten then romanticised by feminists who came after her.

I was 28 when I first read author Claire Tomalin’s brilliant biography of Wollstonecraft — and was enthralled by her tough, contradictory, awkward, selfish, often insensitive, determined, passionate, brave, despairing and opinionated character. 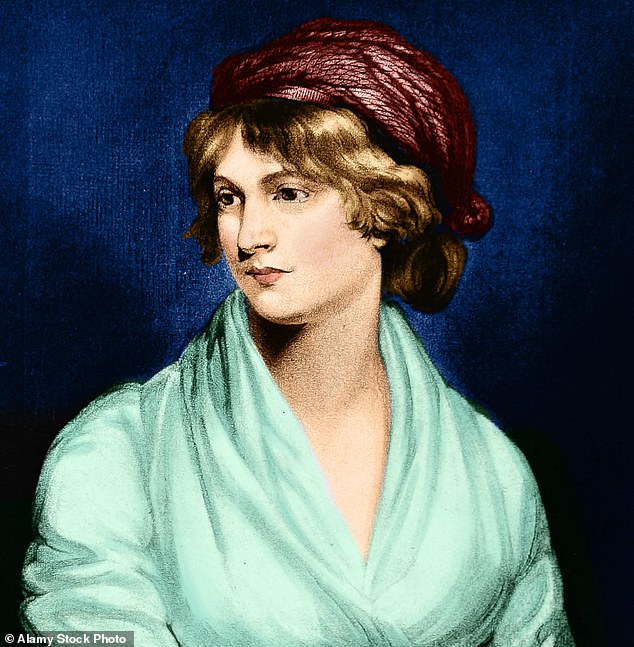 A portrait of Mary Wollstonecraft. She was quite extraordinary and, because of that, I am appalled by the nonsense that is being spouted in her name, writes Bel Mooney

Her childhood in East London helped shape her — her father, a drunk, squandered the family money and abused both her and her mother. She received little formal education so, aged 25, she opened a girls’ boarding school on Newington Green in London near the site of the statue.

At 33, she wrote A Vindication Of The Rights Of Woman, which imagined a social order where women were the equals of men.

She was quite extraordinary and, because of that, I am appalled by the nonsense that is being spouted in her name. For example, members of the statue campaign committee have said: ‘The sculpture combines female forms which commingle and rise together as if one, culminating in the figure of a woman standing free.

‘She is Everywoman, her own person, ready to confront the world. As opposed to traditional male heroic statuary, the free-standing woman has evolved organically from, is supported by, and does not forget, all her predecessors who advocated, campaigned and sacrificed themselves for women’s emancipation.’

Sculptor Hambling takes up this theme, telling her critics they have ‘missed the point’ by objecting to the nakedness of the statue.

‘She has to be naked,’ says Hambling, ‘because clothes define people. We all know that clothes are limiting and she is Everywoman. As far as I know, she’s more or less the shape we’d all like to be.’ 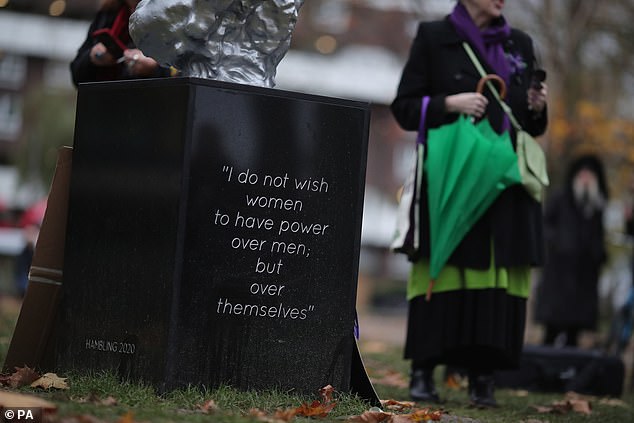 The base of ‘A Sculpture for Mary Wollstonecraft’ in Newington Green, north London, reading: ‘I do not wish to have power over men; but over themselves’

What? Does she mean every woman wants a gym-honed body — skinny but with handsome breasts? What kind of clichéd sexist view of female aspiration is that? Hambling is yet another ill-informed modernist who can only view the past through 21st-century sensibility.

Her nonsensical rationale for the nudity becomes even more convoluted: ‘She’s Everywoman and clothes would have restricted her. Statues in historic costume look like they belong in history because of their clothes. It’s crucial that she is “now”.’ Oh, the absurd ego of the modernists!

Poor Mary. Not allowed to be an extraordinary individual, but reduced to all-purpose ‘Everywoman’ — like a shapeless one-size-fits-all. Not allowed the dignity of a plain dress because that would, heaven forbid, locate you in history, which fashionable sensibilities cannot bear.

A woman of your time, writing about the issues you saw, you must be dragged into 2020 so people can claim you as ‘now’ — whatever the hell that means. You were a woman of acute, challenging intelligence, passionate about education and language.

Yet now your fierce spirit is simplified to a version of the famous statue of ‘Peter Pan’ in Kensington Gardens — he stands on top of a similarly-shaped plinth swirling with nymphs and rabbits and squirrels — and turned into as much of a fairy tale.

Because this statue diminishes Wollstonecraft by removing her from her time and reality. It pushes her into a sentimental narrative (upwardly swirling to freedom, blah) which sells her rich life short.

This is the radical who travelled to France during the revolution, rejoiced in the overthrow of the aristocracy, yet was deeply moved by the execution of Louis XVI and saw the revolutionaries become ‘a race of monsters’.

This is the sexual radical who detested marriage, yet was delighted to tie the knot with her fellow radical, the philosopher William Godwin. She loved domesticity and wrote to Godwin that she had a ‘true wifeish submission to your judgment and inclination’.

And she was furious when her high-minded husband, travelling in the Midlands, delayed his return so he could catch a spectacle at Coventry fair in which the chief attraction was (as he wrote to her) ‘a female, representative of Lady Godiva… dressed in a close dress, to represent nakedness.’ (Doesn’t sound as if she would appreciate her nude alter ego.)

The point is you cannot shoehorn a woman of her time into some all-purpose symbol of the modern #MeToo struggle. 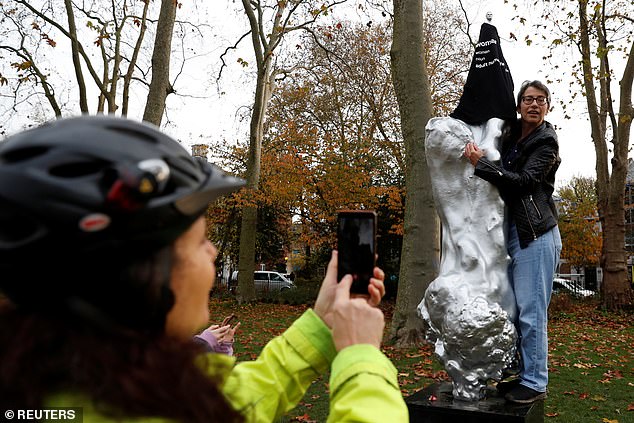 A protestor covers the Mary Wollstonecraft statue with a t-shirt in Newington Green, London

Wollstonecraft wrote of servant girls turned out because they were pregnant, girls who tried to abort their babies or kill themselves, women bullied by employers and husbands, women with no financial independence or rights, women exploited economically and sexually. Her life and work were far too serious to be fetishised into pretty nakedness by Maggi Hambling.

According to an essay after Mary’s death in 1798: ‘She had strong passions and a strong understanding. She was a great genius but like most great geniuses she was uncommon.’

Godwin wrote: ‘I believe that there does not exist her equal in the world.’

In 1974, her biographer Claire Tomalin concluded that, ‘Mary’s breath and experience and outspokenness were lacking in England throughout the hundred years that followed her death.’

On August 30, 1797, Wollstonecraft gave birth to her second daughter, Mary. The placenta broke during the birth and became infected — a common occurrence in the 18th-century.

After several days of agony, on September 10, Wollstonecraft died of septicaemia. Had she lived she would have seen her daughter Mary — whose birth ‘caused’ her death — grow up to be as much of a questioning, free-thinking spirit as her mother, and make her own name by writing Frankenstein.

I do not believe in pulling down statues — good or bad — because they all tell us something of the time in which they were created.

So Maggi Hambling’s odd, feeble interpretation of ‘Everywoman’ (aka, one extraordinary woman) will stand, to be admired and hated. Just don’t think it will tell you anything at all about the spirit of Mary Wollstonecraft. Brit mum’s fury as female gypsy who stabbed, scalped and left her for dead has her jail term CUT by Portuguese court Jennifer Garner's famous friends in stitches over her questionable haircut
We and our partners use cookies on this site to improve our service, perform analytics, personalize advertising, measure advertising performance, and remember website preferences.Ok