Concord, New Hampshire: Bernie Sanders has unleashed a wave of star power on the eve of the New Hampshire primary, enlisting rock band The Strokes, Sex and the City actress Cynthia Nixon and high-profile congresswoman Alexandria Ocasio-Cortez to energise his progressive base.

All major polls show the Vermont senator leading in the crucial state, which will hold its first-in-the-nation primary on Tuesday (Wednesday AEDT). 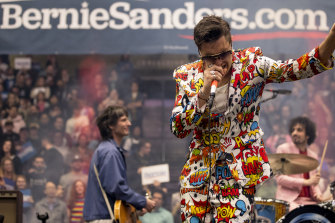 Interstate activists have been blanketing New Hampshire in recent days, knocking on thousands of doors in a bid to avoid a repeat of the surprisingly flat voter turn-out in last week's botched Iowa caucuses.

Former Indiana Mayor Pete Buttigieg has surged in the polls following his strong showing in Iowa, but fellow moderate Amy Klobuchar is building her support and threatens to cut into his vote total. 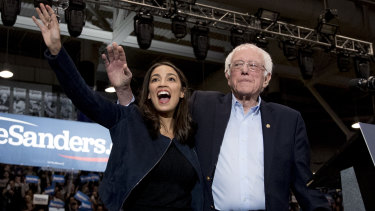 Former vice-president Joe Biden, who is finished a poor fourth in Iowa and is polling in the same position in New Hampshire, has conceded he is likely to do poorly in the state.

The RealClearPolitics polling average shows Sanders on 29 per cent in New Hampshire followed by Buttigieg on 21 per cent, Klobuchar on 12 per cent and Biden tied with Elizabeth Warren on 11 per cent.

The candidates' attacks on their party rivals have grown increasingly sharp in recent days, with Biden and Klobuchar accusing Buttigieg, 38, of lacking the experience required to be president.

Meanwhile, the moderates have accused Sanders of taking a dogmatic, far-left approach that will turn off swing voters in the November election.

On Monday night (Tuesday AEDT) Sanders attracted more than 5000 people to a rally in Durham, three times more than any other campaign event in the state.

"We are going to win this nomination because we have a multi-generational, multi-racial grassroots movement," Sanders told the rally.

Nixon, who unsuccessfully ran for governor of New York in 2018, told the rally: "The Bernie fever is at a pitch."

When she said she supported Hillary Clinton in 2016 the crowd erupted in loud boos. 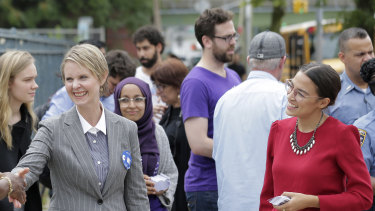 Earlier in the day Nixon advised wavering voters: "Stop worrying about what your in-laws or your co-workers will do. If you like what he's saying and you think it's the right path then do it.

"We deserve more than crumbs; we deserve the whole pie."

Ocasio-Cortez, one of the youngest women ever elected to the US Congress, said: "We are at a crossroads in our democracy.

"We need to nominate someone with a political revolution at their back … It will not be one candidate who beats Donald Trump, it will be a movement of Americans rejecting hatred and embracing love."

Sanders' home state of Vermont borders New Hampshire and is only an hour's drive from Boston, Massachusetts, where several leading universities including Harvard are located.

Earlier in the day Sander attacked Biden and Buttigieg for accepting donations from wealthy interests.

"They have dozens and dozens of billionaires contributing to their campaign," he said.

"Don’t tell me that contributions from billionaires don’t matter – they shape the legislative agenda of what goes on in Washington."

Klobuchar, a senator from Minnesota, drew more than 1000 people to a rally in Nashua.

She challenged Buttigieg's status as the fresh face of the contest saying: "I am also a fresh new face in politics, and my age, 59, is the new 38.

Buttigieg said: "This is a moment for bringing as many people as we can into the picture. But a picture where you’re either for a revolution or you’re for a status quo is a picture in which many of us cannot see ourselves."