A white police officer has been caught on film fatally shooting a black man as he ran away from him in Tennessee.

Daniel Hambrick, 25, was shot three times and killed by officer Andrew Delke, also 25, after he fled a traffic stop in Nashville on July 26.

The footage, taken from school CCTV cameras at a school, was released by the Tennessee Department of Investigations as part of their probe into the killing. 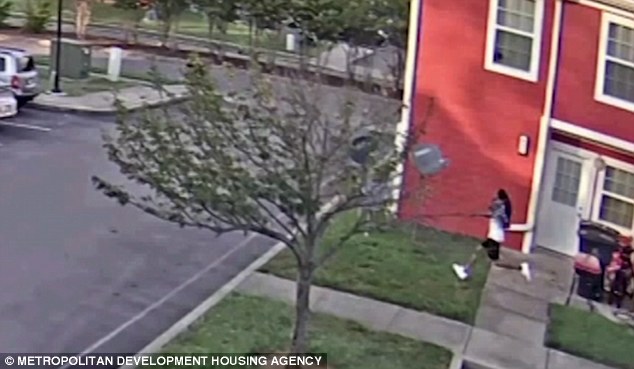 Daniel Hambrick, 25, (right) was caught on a school CCTV system running away from officer Andrew Delke, also 25, before being shot dead in Nashville last month 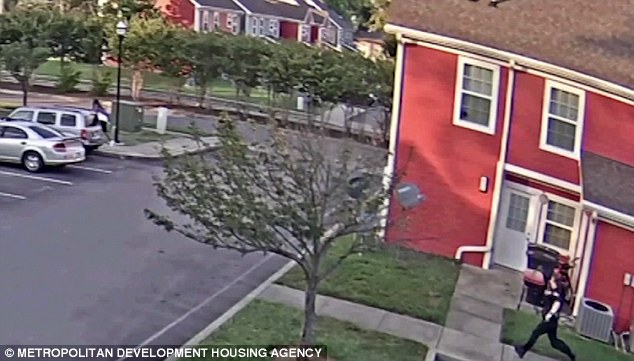 Delke (bottom right) said Hambrick fled a traffic stop with a gun in his hand on July 26, prompting him to give chase before opening fire

The video shows Hambrick around 40 yards away from Delke and running in the opposite direction when he opens fire.

In total Delke fired four shots, three of which struck Hambrick causing him to fall to the floor.

As Hambrick lays bleeding to death, Delke can be seen walking away with his gun drawn before approaching the wounded man when another officer arrives.

Hambrick was handcuffed before he died, though it is not clear from the footage if either officer attempted to provide medical help.

Delke claims that Hambrick was armed when he was shot – and police say a gun was found close to the scene – but CCTV does not clearly show whether Hambrick was holding anything.

After the video was released, Nashville NAACP demanded that Delke be fired and charged with murder.

Jo Kimbrough, attorney for the Hambrick’s family, told The Tennessean: ‘He [Delke] shoots him [Hambrick] repeatedly from behind. 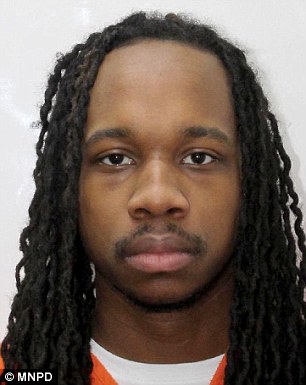 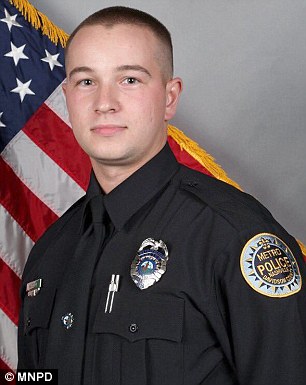 Hambrick is pictured in a previous mugshot, left. It is not known exactly what he had been arrested for, but he had a lengthy criminal history including charges for drugs, firearm offences and assault. Officer Delke is pictured right 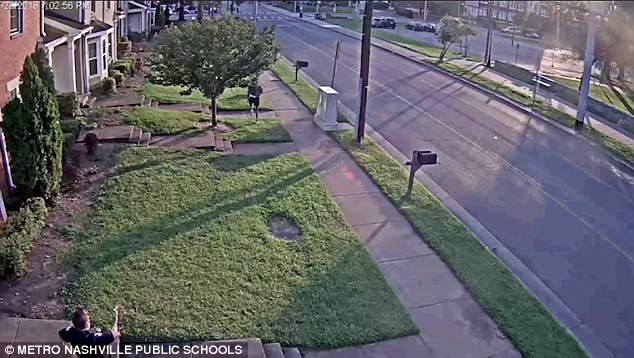 Video shows Hambrick (center, underneath the tree) with his back turned and facing away from Delke (bottom left) when the officer fires four shots, three of which hit Hambrick 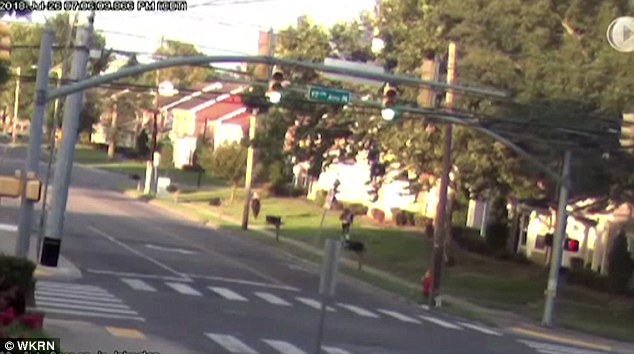 After Delke (center, to the right of the telegraph pole) shoots Hambrick (to the right of Delke, clutching his chest) he falls to the ground, where he was later handcuffed 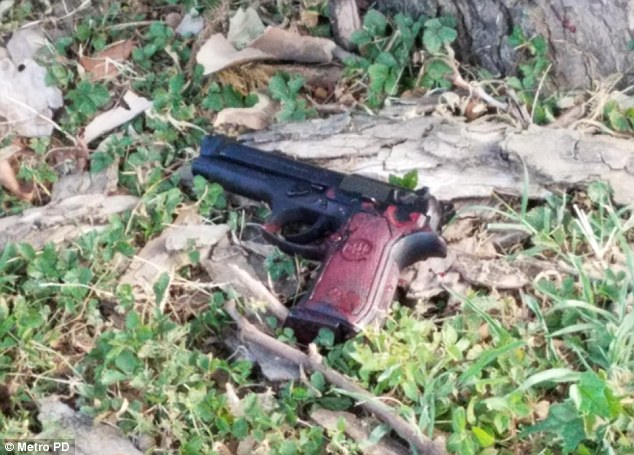 ‘The police officer fired four times, three of those bullets ripped Daniel apart. He fell to the ground, where he was cuffed and left, left there like a dog. Worse than a dog.

‘I’m a criminal defense attorney. If there is ever a case of premeditated first-degree murder, this is it.’

The NAACP is also demanding that the Federal Bureau of Investigation open up a civil rights probe and a review of the Nashville Police Department.

Mayor David Briley did announce a ‘comprehensive review’ of police policy after the video emerged, though the investigation into Delke’s conduct is ongoing and it is not clear if any action will be taken against the officer.

Nashville Fraternal Order of Police President James Smallwood criticized investigators for releasing the video before their task is complete.

He added that if Hambrick had dropped a pistol he was holding as ordered, he would still be alive.

Members of the Hambrick family sobbed and raised their voices in outrage during a press conference after they had just watched the video.

However, the did urge people to refrain from violence during their protests. 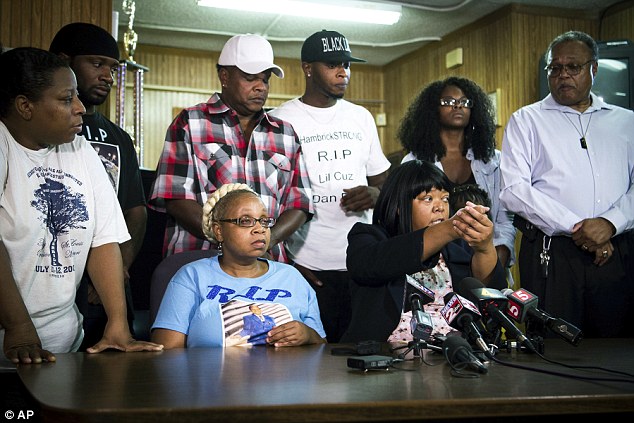 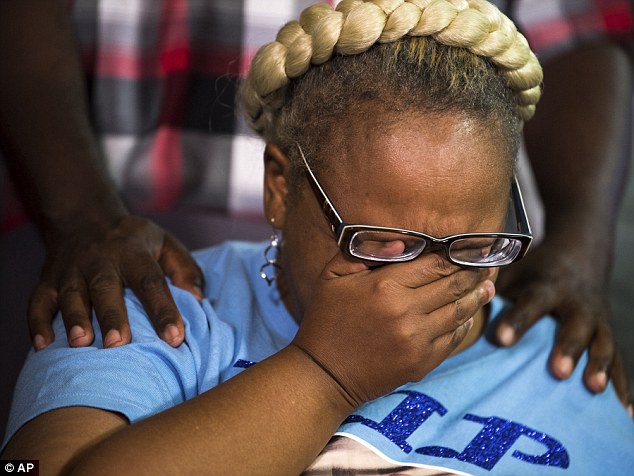 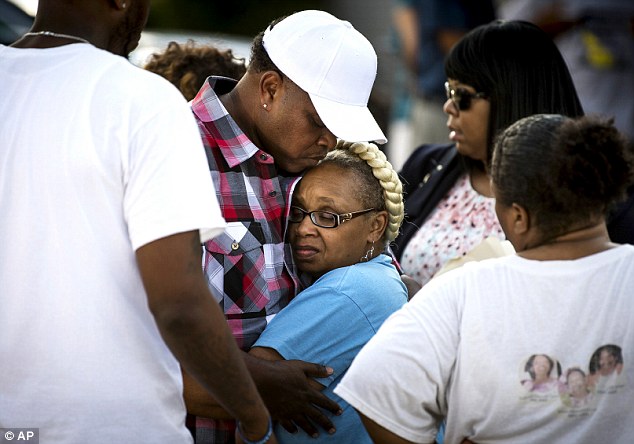 The Nashville Fraternal Order of Police insists that Delke was justified in his decision to shoot, and that had Hambrick dropped his weapon as ordered, he would still be alive

‘I just want justice for my son,’ Vickie Hambrick, Hambrick’s mother, said during the news conference with the local NAACP.

‘That’s all I’m asking. And for all the young black guys and young women, I want justice for them. I love them all.’

The Tennessee Bureau of Investigation has said police had been looking for stolen vehicles when Hambrick was stopped.

Police said he had been ‘driving erratically’, though wasn’t in a stolen vehicle.

Bureau spokesman Josh DeVine has said authorities believe that during a traffic stop, Hambrick ‘reportedly emerged from the vehicle with a firearm in his hand’ and the ‘situation escalated,’ resulting in Delke firing his gun several times.

Hambrick appeared to have a dark-colored object in his hand during the chase in a separate video from a housing complex that also has been released.

The bureau said a handgun was recovered at the scene.

On the day of the shooting, Metro Nashville Police tweeted out a photo of a handgun, saying that a fatal police-involved shooting occurred and the ’25-year-old man who carried this gun was shot by MNPD officer.’

Nashville police spokesman Don Aaron said the new video must be evaluated ‘contextually, with the entire TBI file, which obviously we don’t have yet.’ He said the department maintains that Hambrick had a gun. 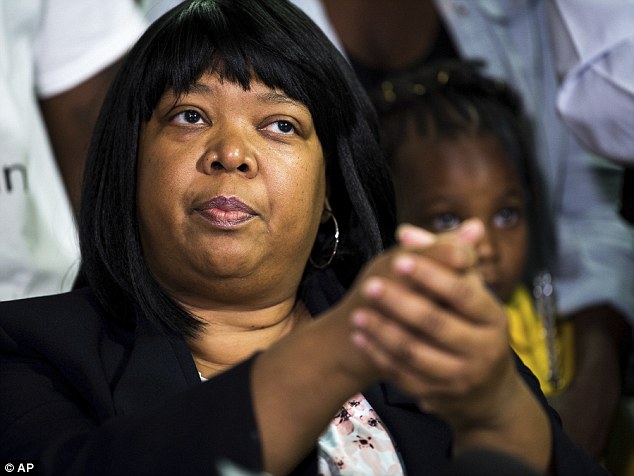 Joy Kimbrough, attorney for the Hambrick family, imitates the shooting during a press conference in which she branded the killing ‘premeditated first-degree murder’ 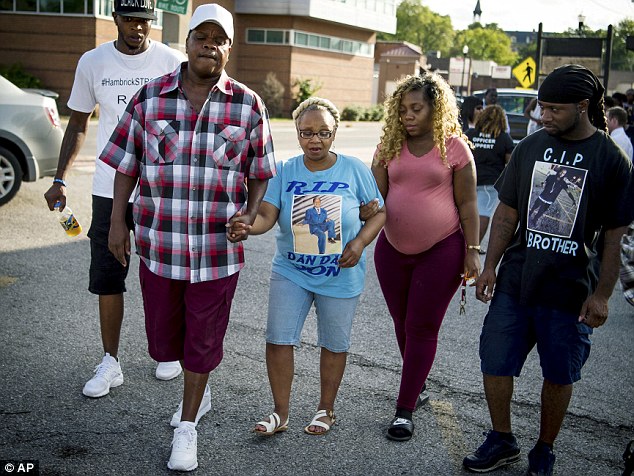 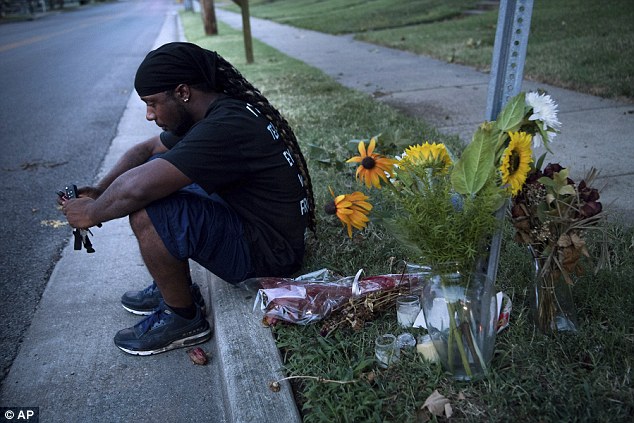 Antonio Hambrick, Daniel’s brother, sits next to a memorial at the spot where he died

Aaron said Delke was placed on routine administrative assignment and would not return to street duty until the investigation is complete and the district attorney has assessed it.

Sam Hambrick Jr., Hambrick’s uncle, questioned how his nephew could’ve been a threat while running away.

‘I don’t care if I have a hand grenade in my pocket; if I’m running away, I can’t be a threat to you,’ Sam Hambrick Jr. said.

Smallwood, the Fraternal Order of Police official, countered that Hambrick refused commands to drop the gun, and could’ve fired over his shoulder or under his arm, or swung his arm back and shot the gun upside down.

Smallwood said his group is confident that the investigation will exonerate Delke.

Nashville District Attorney General Glenn Funk’s office said the footage was released ‘in an effort to show transparency as much as possible during this investigation,’ adding that the investigation is expected to be finished within the next two weeks.

The mayor said neither he nor Funk has made any judgments yet on the officer’s actions.

‘It is absolutely necessary that in this context, we continue to conduct ourselves peacefully and to give the process a chance to reach its final conclusion, while we work hard as a community to improve the way we police in Nashville,’ Briley said.

The shooting has heightened calls from community members who want to create a police oversight board in Nashville.

A group has gathered more than twice the number of signatures required for a referendum on the topic, and the local election commission needs to approve the language and 8,269 signatures to place it on the ballot.

The mayor said he is for civilian oversight of the police department but said he has questions about that particular proposal.