Blinken warns the world will see more atrocities in Ukraine

US Secretary of State Antony Blinken on Tuesday said the world may yet see worse atrocities unfold than those already reported since the Russian invasion of Ukraine more than six weeks ago.

“We have credible information that Russian forces may use a variety of riot control agents” to weaken and incapacitate Ukrainian fighters and civilians as part of a campaign to take the besieged city of Mariupol, he said. 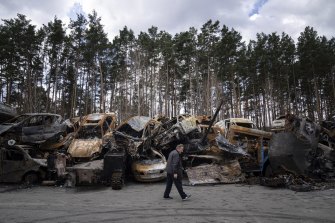 A man walks past a storage place for burnt armed vehicles and cars on the outskirts of Kyiv.Credit:AP

Like other US officials, he said he couldn’t confirm allegations that chemical agents already have been used by Russia in Ukraine.

“We’re in direct conversation with partners to try to determine what actually has happened,” he said

Ukraine said it was investigating a claim that a poisonous substance had been dropped on its troops in the eastern Donbas. It was not clear what the substance might be, but Western officials warned that any use of chemical weapons by Russia would be a serious escalation of the already devastating war. 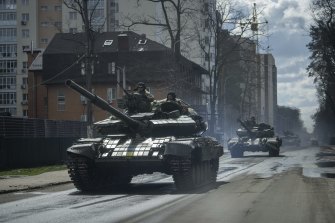 Ukrainian tanks move down a street in Irpin, on the outskirts of Kyiv, following the Russian withdrawal.Credit:AP

The Organisation for the Prohibition of Chemical Weapons (OPCW) said it was also concerned by the reports of chemical weapons use. A spokesman said OPCW, the global chemical weapons watchdog, was monitoring the situation.

Blinken said worse atrocities may yet unfold in Ukraine as Russian forces push to take Mariupol.

Allegations that Russian President Vladimir Putin’s forces committed war crimes intensified last week amid outrage at the large numbers of casualties in towns surrounding Kyiv as Russian forces withdrew to concentrate in the east. They left behind civilian bodies in the streets as stories of rape and looting emerged.

Blinken’s comments came just hours after Putin said his attack on Ukraine would not cease.

Putin insisted the campaign was going as planned, despite a major withdrawal in the face of stiff Ukrainian opposition and significant losses.

Russian troops, thwarted in their push toward Ukraine’s capital, are now focusing on the eastern Donbas region.

On the diplomatic front, a planned visit to Kyiv by German President Frank-Walter Steinmeier was rejected by Ukraine, he said on Tuesday, following a report that President Volodymyr Zelensky was critical of Steinmeier’s historical advocacy of Russia.

Steinmeier had planned to visit Kyiv with his Polish counterpart Andrzej Duda and the presidents of Estonia, Lithuania and Latvia “to send a strong signal of European solidarity with Ukraine there,” he told journalists during a visit to Warsaw.

“I was ready for that. But apparently – and I have to admit – that was not wanted in Kyiv,” he said.

Bild newspaper reported earlier on Tuesday that Zelensky had rejected Steinmeier’s plans to visit due to his close relations with Russia in recent years and his years of support for the Nord Stream 2 gas pipeline, a project designed to double the flow of Russian gas direct to Germany. The project has since been cancelled.

After Russia’s invasion of Ukraine and a social media backlash, Steinmeier expressed regret for his earlier stance. He said his years of support for Nord Stream 2 had been clearly a mistake.

Steinmeier, a Social Democrat who served as foreign minister under Chancellor Angela Merkel before being elevated to the presidency, has known Russian President Vladimir Putin since 2001.

“That Putin from the year 2001 has nothing in common with the Putin of 2022, who we are now experiencing as a brutal, entrenched warmonger,” Steinmeier has said.