Harry Jameson hit the headlines in August after he was pictured running around a central London park with Mr Johnson.

Mr Jameson, 38, who shows off his jetset lifestyle with glamorous wife Amy to his 37,000 Instagram followers, is a trainer to the stars and has worked with celebrities including Ms Whitmore, Hollywood actor Dolph Lundgren and former footballer Wayne Bridge.

Today, he was joined on an online class by the pregnant Ms Whitmore and shared tips on how to relax your body while keeping it energised. 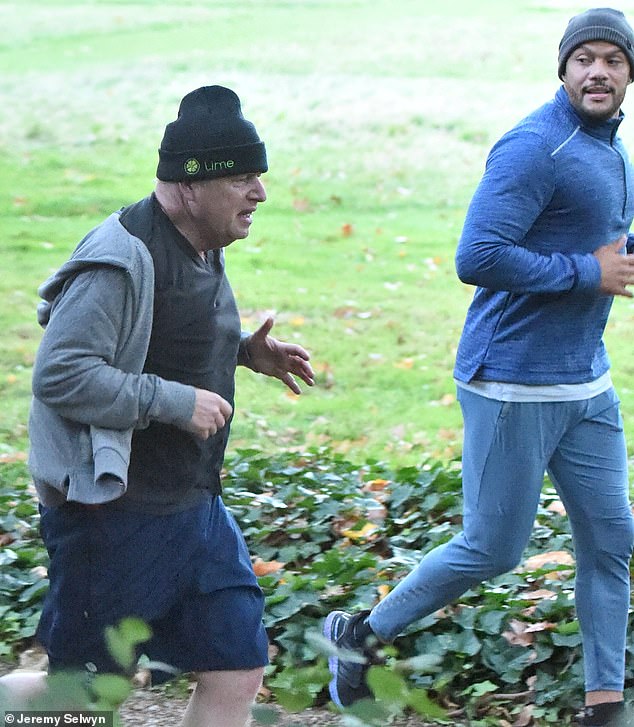 Boris Johnson with his personal trainer Harry Jameson. Mr Jameson is a trainer to the stars and has worked with celebrities including Ms Whitmore, Hollywood actor Dolph Lundgren and former footballer Wayne Bridge 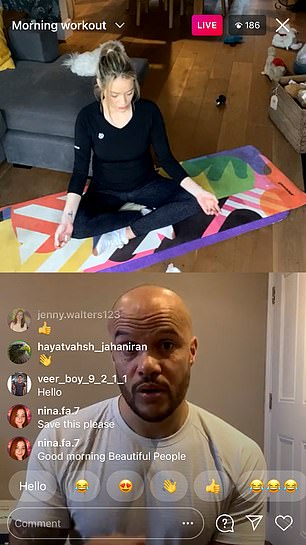 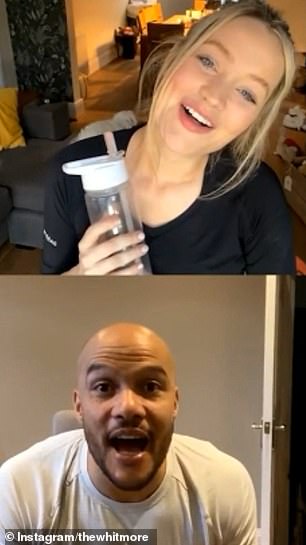 Today, Mr Jameson was joined on an online class by the pregnant Ms Whitmore and shared tips on how to relax your body while keeping it energised

He showed off stretches and breathing exercises intended to help people get ‘ready for the day’.

Mr Jameson also spoke about his wife Amy’s pregnancy and shared how being pregnant helps women be more flexible, thus aiding their exercise.

He demonstrated a series of stretches and breathing exercises to Ms Whitmore, with the Love Island presenter and other pregnant women later taking to Instagram to praise the gentle workout.

The class was a far cry from his more robust work with the Prime Minister, who was seen wearing a strained expression as he ran through a park with Mr Jameson last year following his coronavirus battle.

The PM previously revealed he had lost more than a stone in weight since his coronavirus scare as he urged Britons to join him in getting fit to ward off the worst of the disease.

Obesity has been flagged as a major risk factor for coronavirus and with one in four Britons classed as obese, the PM has urged the nation to shed the pounds.

Although he enlisted the services of Mr Jameson to aid his battle to lose weight, it is unclear what programme he is following or how much it costs.

Mr Jameson previously revealed how his methods go against many of the most popular modern fitness trends, with a focus on slow workouts that reduce stress, a simple diet plan and daily breathing exercises.

The trainer, who says he has guided ‘many a top, stressed-out executive’ during his 17 year career, told 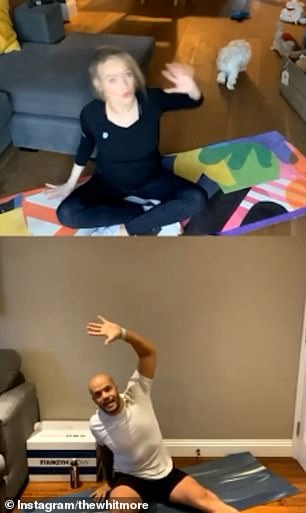 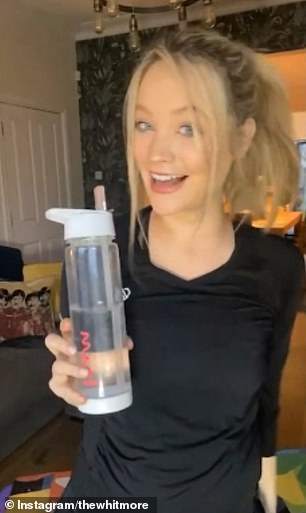 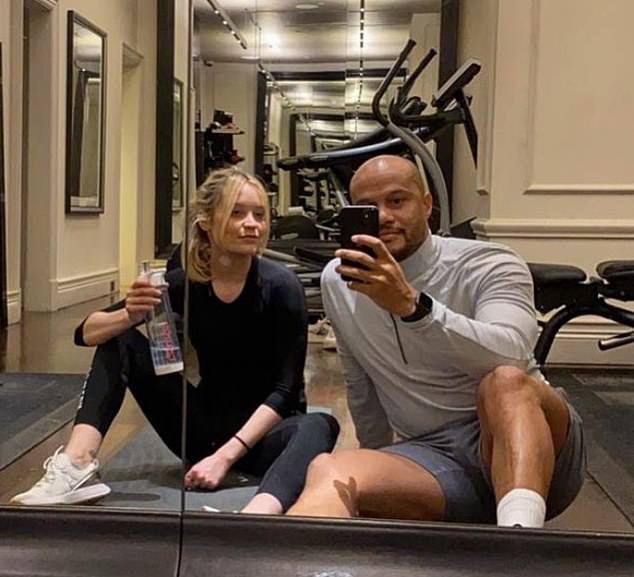 His Move Your Gut programme focuses on stress reduction, saying: ‘Stress has a negative impact on gut health and the hormones it produces are one of the reasons that fat gets stored in the abdominal area, leaving you with a thick middle.’

His programmes focus on helping his clients to lose weight and achieve optimum health with old-fashioned cardio and flexibility exercises.

However, he was embroiled in a legal row shortly before being spotted exercising with the Prime Minister.

He was forced by a court to pay a client £2,500 for missed exercise sessions after a furious two-year row.

The fitness expert was hired to give the woman personal training sessions to help her overcome mobility issues caused by arthritis. 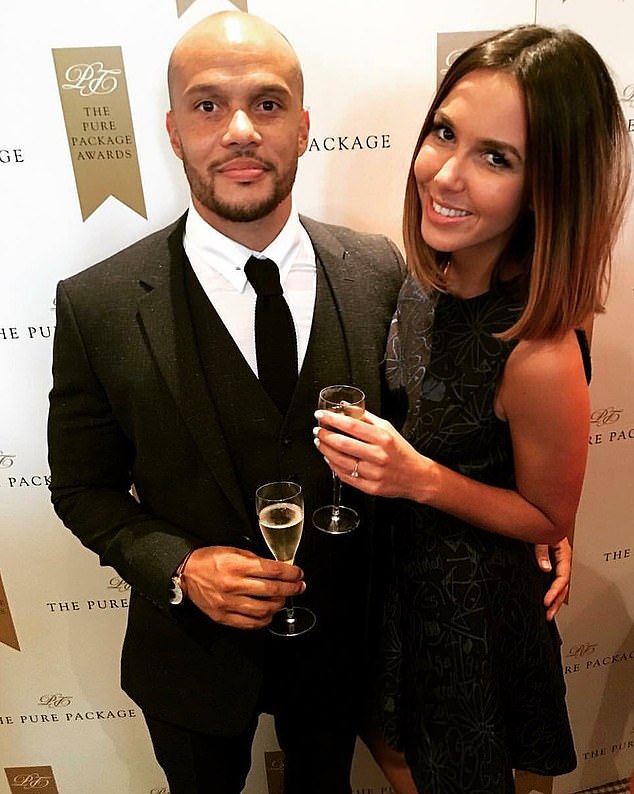 Mr Jameson, pictured with his wife, has led workshops for teams at Twitter, ITV and ASOS and has curated one-on-one fitness training for senior leaders at Quintessentially, Chelsea Football Club and the Soho House Group 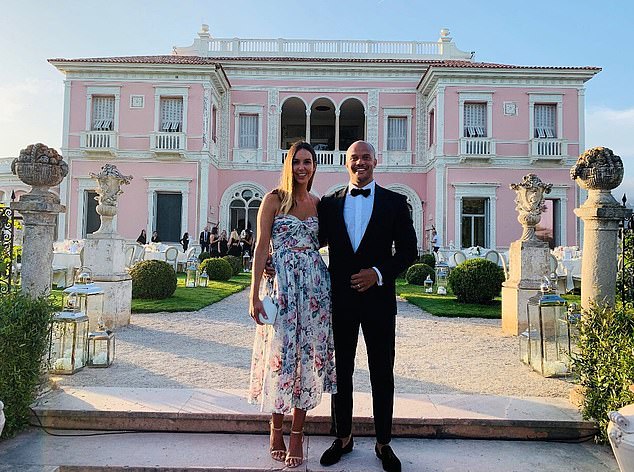 Mr Jameson previously revealed how his methods go against many of the most popular modern fitness trends, with a focus on slow workouts that reduce stress 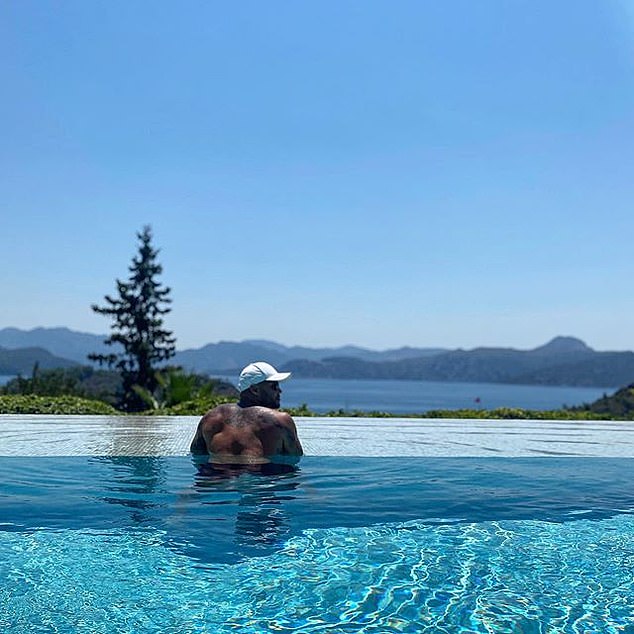 The trainer touts a four week ‘body blitz’ for men. It reads: ‘No gym needed. No excuses. Invest in a workout mat, two dumb bells and train from anywhere, at any time. Each week will be more challenging than the last, recruiting new muscle groups to ensure you get that full body tone’

Imogen, 33, paid him £3,000 in advance – but their business agreement collapsed after just six sessions when she claims he began to postpone their meetings, something he denies.

Speaking exclusively to MailOnline, Imogen, a lawyer from London, said: ‘I don’t know how the Prime Minister came to hire him, but I didn’t have a great experience hiring him.

‘It was very difficult and I wish I had never paid him all that money so quickly and early on.

‘It seems to me that he decided to pay us our money back because he knew he was going to be training the Prime Minister and it would have looked bad for him.

‘He obviously knew the time was up to pay us back and he would have hoped to avoid any embarrassment.’

She added: ‘I was shocked to see him jogging with Boris Johnson.’

Speaking outside his London home, Mr Jameson hit back and told MailOnline: ‘The money was paid back and the issue was resolved. That’s the end of it.’ 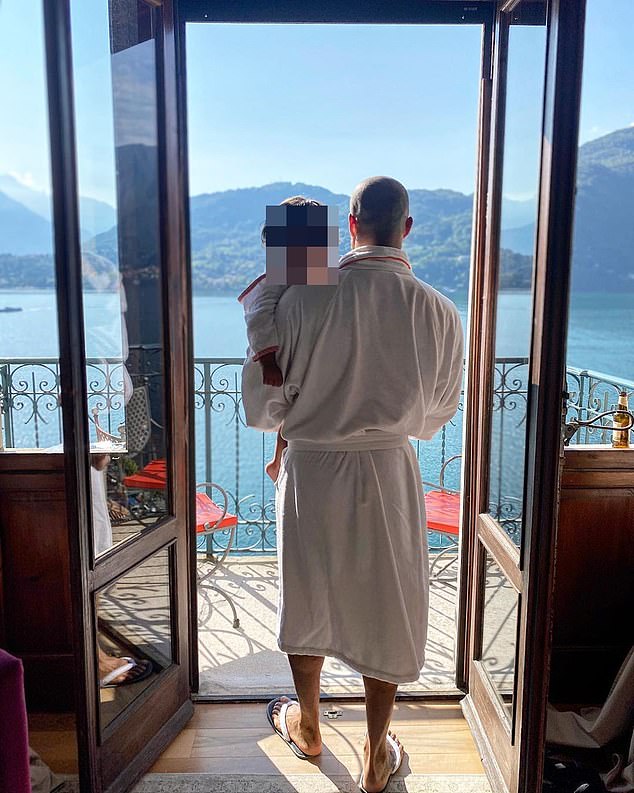 Although he enlisted the services of Mr Jameson to aid his battle to lose weight, it is unclear what programme the PM is following or how much it costs 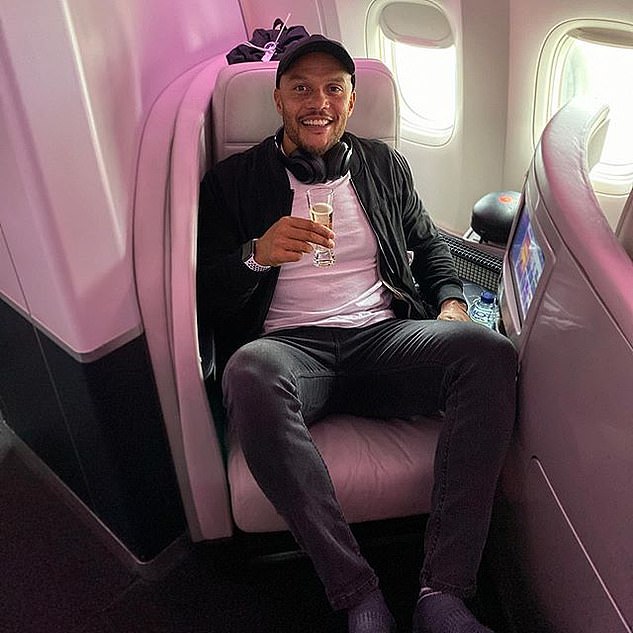 The personal trainer, who describes himself as an ‘elite performance coach’, was initially hired by Imogen’s mother Helen Woodman in January 2018 and paid £1,100 for ten sessions.

After the first few sessions, Mr Jameson asked for further £2,100 in advance to extend her course of classes, Imogen claimed.

‘I had been given five one-hour sessions when he asked for more money,’ she said. ‘We trusted him and gave him the money which should have been for 30 hours in total.

‘But soon after that he stopped returning my messages and requests for more hours. He started cancelling appointments.

‘After several attempts to book sessions, we then asked for our money back but he tried to say that we had cancelled on him and that it was our fault.

‘He said he had a new cancellation policy with a non-refund and that we had cancelled appointments, but that was not the case.

‘I managed to get one more appointment with him through all this which brought the total to six hours, with 24 still outstanding.

‘I then sent him a very nice message telling him that as it had only been six hours, could he pay back about £2,500.

She added: ‘I made it very clear to him that if he didn’t pay back the outstanding money, I would take him to a small claims court which in the end was necessary.’

On January 8 last year after almost two years of dispute, Mr Jameson wrote an email to Imogen and sent a copy to his agent Tom Caplan.

He wrote: ‘Just to clarify. I have not once ignored you or lied… I have been nothing but forthcoming, communicative, respectful and polite.

‘As I have stated on many occasions, I am sorry that you no longer want to use the sessions that you purchased two years ago in Jan 2018.

‘You are demanding a full refund which is unreasonable and unrealistic. I have offered a goodwill gesture that is generous and fair, but you have rejected it.

‘You are unwilling to talk or compromise when I am trying to find a solution that suits both parties.

‘If you would like to agree a sensible settlement please let me know… Happy New Year. Thank you.’

Four days later Mrs Woodman, 68, replied, warning him he was in breach of contract: ‘This matter has been going on for an inordinate matter of time.

‘Due to Imogen’s mobility problems, I accompanied her to the venue of every session she had with you. There were very few and nowhere near ten as you have claimed.

‘You repeatedly cancelled at short notice and ignored many requests to book sessions with you. On some occasions we were about to set off and then received a cancellation.’

Mr Jameson’s representative Mr Caplan, from Round World Entertainment, hit back with an angry email to the two women on January 27.

Offering £1,000 to settle to dispute, Mr Caplan said the women were trying to damage the training coach’s ‘impeccable professional reputation’.

When Imogen then lodged a claim at the Salford County Court, Mr Jameson said he could repay the money at £100-a-month and had a bank account with £580 in it.

He was ordered to repay the full amount of £2,540 plus costs of £115, which Imogen received at the end of August, 48 hours before Mr Jameson was seen jogging alongside the prime minister.

‘It was a few days after we got our money back that we saw him with Boris,’ Imogen added.

A source close to the fitness trainer said: ‘This was all done and dusted a long time ago. Harry has the highest of reputations and professionalism and is well respected.’

A spokesman for Mr Jameson added: ‘For over 15 years, Harry has worked with a number of senior level executives and global brands as an elite wellness consultant and personal trainer.

‘A dispute did occur with Imogen Woodman regarding outstanding sessions and a refund was paid back in full by Mr Jameson.

‘Mr Jameson has an exceptional reputation with hundreds of clients over the years which is why he has achieved the success he has.’