Britain was under growing pressure last night to stand up to Beijing over the latest threat to Hong Kong freedoms.

Hong Kong’s pro-democracy movement called on Downing Street to stand up to Beijing over the sweeping changes, and called for Britain to offer ‘sanctuary’ to those in China’s crosshairs as it tries to dismantle the ‘one country, two systems’ constitutional principle.

Critics said the new law would lead to widespread use of secret police, arbitrary detentions, surveillance and even control over the internet on the island territory. 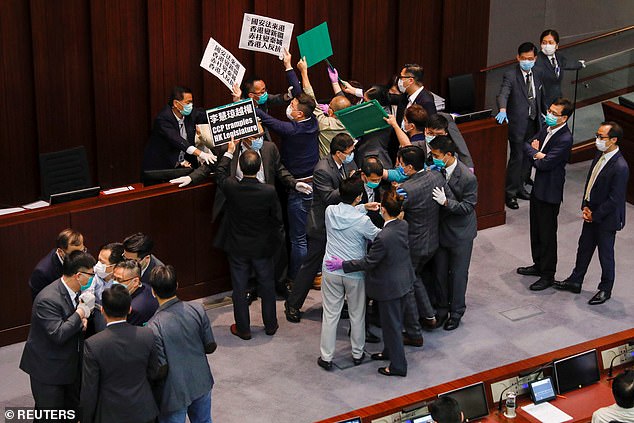 A draft version of the law was put before yesterday’s opening session of the National People’s Congress – China’s most important political event of the year which rubber-stamps decisions already taken by the Communist Party. The congress lasts for nearly a week and will vote on the law on Thursday, the final day.

Several pro-democracy lawmakers were dragged out of Hong Kong’s legislative chamber yesterday after protesting against the proposed law.

Lord Patten, the last British governor before the handover, described the new laws as ‘a frontal assault’ on the relative freedoms granted to Hong Kong.

He said Britain must act over the ‘disgraceful breach’ of China’s international treaty obligations, and branded the Communist Party ‘a very nasty, brutal, bullying and mendacious regime’.

But the move prompted immediate warnings that the law would be used to persecute protesters, and China could bring charges of subversion and terrorism against them. The news caused stock markets around the world to fall, with the Hang Seng Index in Hong Kong suffering its worst day since 2015. 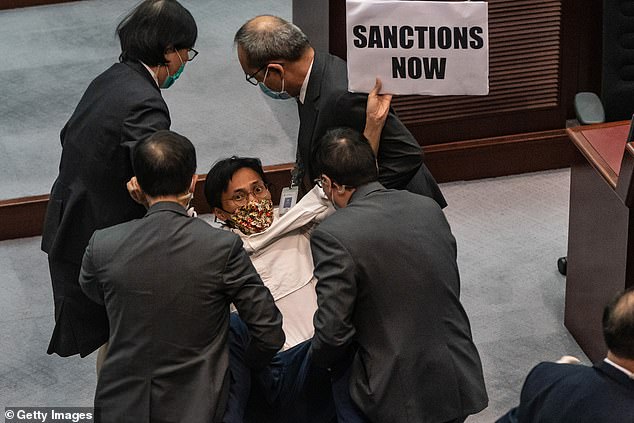 Eddie Chu, a pro-democracy lawmaker, is removed by security during a scuffle with pro Beijing lawmakers

Donald Trump threatened to ‘react strongly’ over the law and US Secretary of State Mike Pompeo said it would be ‘a death knell’ for the relative autonomy promised in the 1997 handover.

Under the ‘one country, two systems’ arrangement, Hong Kong was allowed greater freedom to control its economy and administration until 2047, 50 years after the handover. Pro-democracy campaigner Claudia Mo said Beijing had effectively abolished that principle. She told BBC Radio 4’s Today programme: ‘It could mean the end of Hong Kong because they want Hong Kong dead.’

The politician called on the British Government to support the 3 million British National Overseas passport holders in Hong Kong, and to allow up to 15,000 to flee to Britain if necessary. She said: ‘It is a gesture to start with, that the UK Government is shouldering some moral obligation.’ 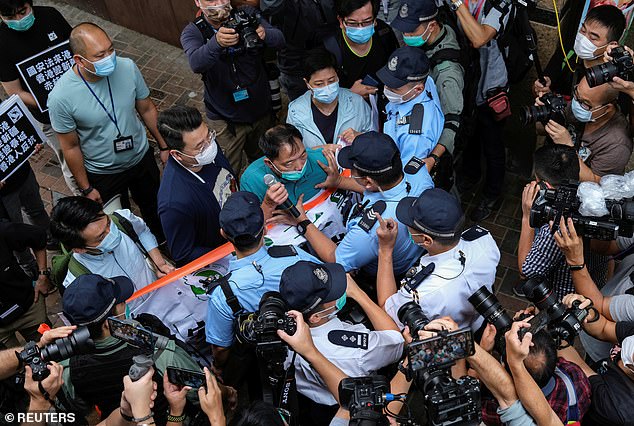 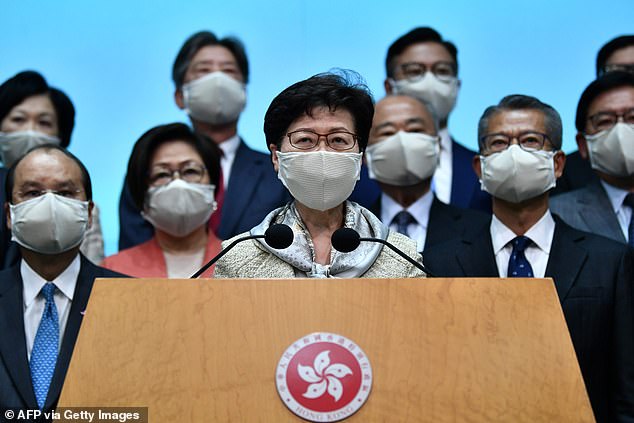 Activists called on supporters to take to the streets tomorrow to protest against the new law.

Tom Tugendhat, who chairs the foreign affairs committee, compared China to ‘a bully in a playground’ and said it was ‘trampling’ democracy in Hong Kong.

Foreign Secretary Dominic Raab and his counterparts in Australia and Canada released a joint statement last night saying they were ‘deeply concerned’ by the plans.

Hong Kong’s chief executive Carrie Lam said she would co-operate with Beijing to ensure the legislation was completed ‘as soon as possible’, once it is voted through by China.

She insisted it would not affect the territory’s autonomy, adding: ‘Hong Kong will remain to be a very free society.’