Kim Rycroft runs a bed and breakfast in Murrindindi Shire, where there are no active cases of coronavirus. Throughout the pandemic, while Melbourne grappled with hundreds of new cases a day, the shire recorded a total of nine cases.

Despite her community's almost unscathed run through lockdown, it remains under stage three restrictions and Ms Rycroft's business, Saladin Lodge in Narbethong, has been open for just a handful of weeks this year due to the combined impact of summer’s bushfires and COVID-19. 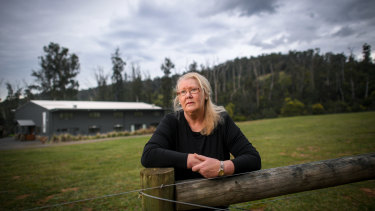 Given the success her community and many others in regional Victoria have had in successfully keeping the virus at bay, Ms Rycroft says she should be permitted to slowly reopen her business to customers from other shires with no active cases.

On Tuesday more than 25 regional council areas had no active cases.

Melbourne had a daily case number average of 78.6 over a two-week period, compared with 4.9 for all of regional Victoria on Tuesday.

Ms Rycroft's plea to be allowed to reopen slowly echoes frustrations from business owners in other regional communities that have no active cases but are still subject to widespread restrictions. 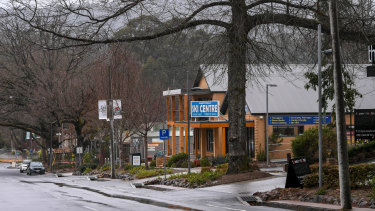 The town of Marysville where almost all businesses are closed.Credit:Eddie Jim

“It should be steady and slow whereas at the moment it’s a blank ruling across the board of nothing,” she said.

From Monday regional Victoria will be afforded a few more freedoms with outdoor public gatherings allowed with up to five people from two households.

But case numbers must fall to fewer than five on average over 14 days and zero mystery cases for regional Victoria to move to step three. That will allow outdoor dining in restaurants and cafes and public gatherings up to 10 people outdoors.

In the third step there will be no restrictions on leaving the house and tourism accommodation can reopen albeit with restrictions.

But Ms Rycroft said some regional communities should now be allowed to form bubbles with other shires where there are zero cases.

She said such a change would help lift the community’s spirits particularly in places such as nearby Marysville where most businesses are closed.

“The shires that have not been impacted need to be opened up to each other,” she said. “Even on a small scale you’ve got to be able to give people some hope.”

This view is shared by North East Community Initiatives recovery manager Brad Quilliam who said businesses should be allowed to operate but safety measures such as wearing masks may need to continue for the foreseeable future.

“I just think it’s too problematic to draw a line of who is in and who is out,” she said.

Professor Bennett said regional Victoria was already close to meeting the government’s threshold with a daily average of 4.9 cases recorded on Tuesday.

Premier Daniel Andrews said the government would not rush to reopen regional Victoria. He cited recent sewerage testing in Apollo Bay, saying it showed the virus could exist in a community without residents knowing it was among them.

He said greater freedoms would be granted only when it was safe to proceed to the next step.

“We’ve got to make sure when we do take those steps that we’ve got a good picture of how much virus is out there and that it doesn’t get away from us very soon thereafter,” he said.

Marysville Triangle Tourism and Business Association president Christine Adams said she understood Sunday's announcement from the state government but it still hurt to hear that restrictions wouldn't be lifted sooner.

"There’s concern about how we’re all going to survive that,” she said. “It was disappointing we couldn’t have seen a bit more opening sooner than later.”

“I think there’s still a lot of community support for the ongoing restrictions,” he said.

Dr Phair said the government should continue to “keep the clamps on” because regional Victoria remained vulnerable if case numbers were high in Melbourne.

“We want them to get Melbourne sorted first and really get numbers under control.”

From Monday in regional Victoria childcare will open to all children. Retail and hairdressers will be allowed to open with density restrictions.