Thousands of doses of expensive antiviral drugs could be wasted if more Australians do not become eligible to take the treatments that have been found to reduce the risk of hospitalisation and death from COVID-19.

That’s the view of the Pharmacy Guild of Australia, along with the Royal Australian College of General Practitioners and some infectious disease experts, which is calling for more high-risk people to be able to take the oral antiviral drugs. 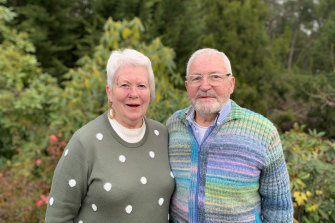 Jeanette and Graham McWilliam took antiviral medication Paxlovid after testing positive for COVID-19 in May.

The medications can prevent COVID-19 from developing into severe disease if taken within five days of symptoms starting.

Boxes of the pills are sitting unsold on many pharmacy shelves and could be thrown away when they expire early next year due to a lack of awareness about them and highly restrictive eligibility criteria, Pharmacy Guild’s Victorian president, Anthony Tassone, said.

Only 50,000 doses of Lagevrio and Paxlovid have been dispensed since March, despite 1.3 million doses being available in Australia.

“In a matter of months, these medicines will expire, and it would be a real shame to have to dispose of these really useful medicines because we didn’t allow access for patients,” Tassone said.

Jeanette McWilliam and her husband, Graham, both 73, said that taking Paxlovid was the reason behind their quick recovery from COVID-19 after testing positive in May.

Jeanette said if her son, who is an immunologist, hadn’t informed them about the medication, they would not have known about it.

“I really do think those tablets helped us a lot, because we didn’t have [any symptoms] after,” McWilliam said.

The call to widen access to the COVID-19 medications follows the Victorian government’s announcement that it will scale back its mass testing and vaccination sites within a week, as GPs and pharmacies deliver more than 70 per cent of vaccinations and rapid antigen tests are widely used.

‘I really do think those tablets helped us a lot.’

However, emergency wards around the country are still struggling to cope with the influx of patients presenting with COVID-19 and the flu, prompting the federal government to push for a greater uptake of antiviral medications to ease the pressure on the system.

Federal Health Minister Mark Butler wants eligible people who test positive for COVID-19 to receive a text message from the Health Department with information about the antiviral drugs that are available.

Butler said the Pharmaceutical Benefits Advisory Committee (PBAC) would continue monitoring the eligibility criteria for access to the drugs, which are currently available to people over 18 who are immunocompromised and at risk of developing severe disease or high-risk adults over 65.

“The PBAC may recommend changes to the eligibility criteria as needed, considering new evidence for the effectiveness and safety of these antivirals in other patient groups as well as the evolving epidemiology of COVID-19,” Butler said.

“Any expansion of eligibility will be considered by the PBAC at its next meeting, in early July, which will consider the potential benefits and harms of these medications.”

Robert Booy, an infectious diseases paediatrician at the University of Sydney, said broadening access to safe and effective antiviral medication to help keep people out of hospital was a “worthwhile proposition”.

“These people will be getting their viral load reduced, so the amount of virus in their body is reduced by the antiviral. That may – it’s not proven – but that may have an impact on lessening transmission.”

University of Queensland infectious diseases physician Paul Griffin said he did not think expanding eligibility would exhaust the country’s antiviral supply. “I think we’re a long way off that right now,” he said.

Australian National University infectious disease expert Peter Collignon said a cost-benefit analysis should be done to avoid unnecessary expenditure, while the risks of side effects and drug interactions for some patients must be considered.

“There are probably a lot more people who would benefit from the antivirals, particularly those over the age of 65 who don’t know about it and are not seeking medical advice quick enough.”

Royal Australian College of General Practitioners’ Victorian council chair, Anita Munoz, said she also supported expanding the criteria to more vulnerable people, as long as the net was not cast too wide and did not overwhelm GPs already facing unprecedented demand.

“We want high-risk individuals to use the medications,” she said. “What we don’t want is to frustrate both GPs and patients by having low-risk patients seek out appointments, only to be told they’re not the target group.”