The City of Melbourne is being advised that it must trial creative transport solutions to ensure that an expected surge in car use does not threaten the CBD’s chances of bouncing back once lockdown lifts. 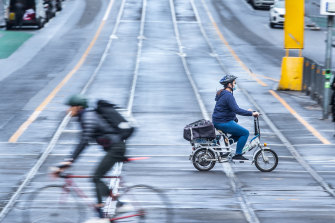 Virus fears have deterred people from using public transport, resulting in a major increase in driving. Public transport use has recovered to 45 per cent of pre-pandemic levels, while car trips have returned to 88 per cent and are now the dominant mode of transport into the CBD.

A new report commissioned by Melbourne Council finds the city’s vehicle road space is close to reaching its full capacity during the morning peak period.

Too many of the cars being driven into the city – 43 per cent of trips – are travelling directly through rather than stopping in the city, using up finite road capacity in peak times.

The city is in urgent need of a transport recovery plan to manage the expected increase in traffic while encouraging people to ride, walk and use public transport, the report warns.

These are among the initiatives proposed for the next year or two:

Offering financial incentives to cyclists is a strategy already being adopted in countries around the world.

Scotland offers a $5700 interest-free loan to purchase up to two e-bikes for each household, while several Italian cities offer up to $800 for people to buy bicycles, Segways, hoverboards or scooters.

Cycling in Melbourne’s city dropped to 50 per cent of pre-COVID levels due to people working from home but grew by 200 per cent outside the CBD.

Before the pandemic in 2019, an estimated 15,000 bicycles entered the CBD daily. As restrictions begin to ease and white-collar workers return to offices, the number of riders is expected to increase.

Council has rolled out 14 kilometres of cycling upgrades to encourage more cycling, with most of the 866 people who responded to a recent council survey supporting the changes. One bike lane can carry double the capacity of a traffic lane or one full train.

Similar to airline ticketing, the price of parking meters should change depending on whether the parking space is being used during a peak period.

Modelled on changes rolled out in Seattle and San Francisco in the US, meter fees are either raised or lowered depending on demand which maximises the number of people entering the city and reduces congestion caused by people hunting for vacant bays.

This compares with the current system in Melbourne’s inner-areas, which sets one price, $7, for all times and places.

The widespread use of smartphones and other digital alternatives should do away with pedestrian crossing call-up buttons, parking meters and ticketing barriers on public transport.

This would help encourage pedestrians to return to the city, and should be considered alongside moves to shorten traffic light cycles to increase throughput for pedestrians, bicycle riders and public transport vehicles.

Pedestrian spaces could be increased by extending kerbs and “pop up” planters and lowering speed limits on smaller streets.

Cars that cruise through the city without stopping would be slapped with new fares.

Based on experiences in other cities, current traffic volumes could be reduced by 10 per cent.

This would be rolled out alongside improvements in active and public transport and revenue raised through the scheme would fund those initiatives.