Rishi Sunak has warned a ‘blunt’ circuit-breaker national lockdown could cause ‘permanent damage,’ to UK jobs and firms.

There are growing calls, particularly from Labour leader Sir Keir Starmer, for a two-week circuit breaker to be implemented as a means of slowing the Covid-19 infection rate.

Manchester and Lancashire could well join Liverpool under Tier 3 restrictions on activity as part of the Government’s latest Covid-19 strategy.

Chancellor of the Exchequer Mr Sunak has defended regional lockdowns, saying they prevent nationwide measures that would be a ‘hit to businesses and jobs’.

But A YouGov poll estimates around 68 per cent of the population would support a two week, nationwide, circuit breaker lockdown. 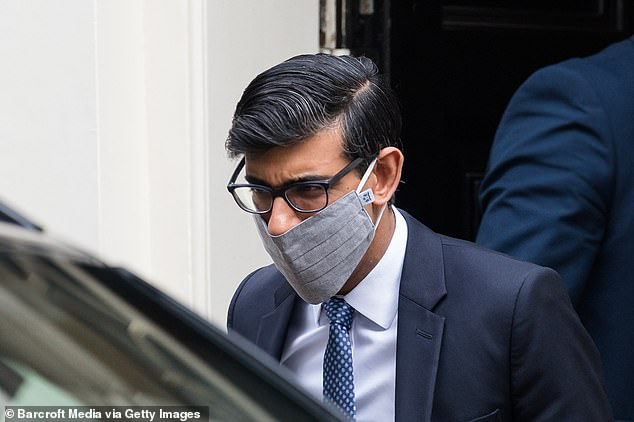 Chancellor of the Exchequer Rishi Sunak, pictured on Wednesday, is one of a host of senior ministers who are calling for Boris Johnson not impose a national lockdown, with Mr Sunak warning it could cost jobs and close businesses

One minister told The Telegraph: ‘A national circuit breaker is a very crude tool … what [it] does is potentially displace the problem rather than remove it.’

A Government source added: ‘It’s no use just delaying things; if you are buying time what are you going to use that time for? You have to make it worth the hit to people’s lives.

‘If the infection rate doesn’t come down after two weeks you will come under pressure to extend it, which could drag on and on.’

The paper reported that talks of bumping London’s restriction measures up to Tier Two, are rapidly advancing, with The Independent suggesting measures could begin in the Capital as soon as Friday.

Meanwhile The Telegraph has reported that Sage advisers feel it is too late for a circuit-breaker lockdown this month, and it could instead take place over Christmas, to limit the impact on children’s education. 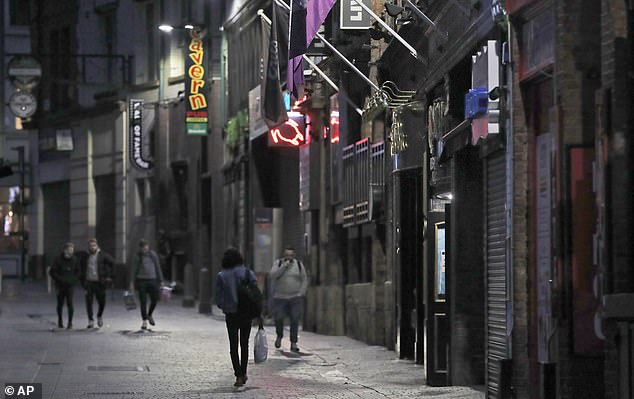 Voicing his opposition to a nationwide lockdown, Mr Sunak told MPs yesterday: ‘The cost of doing so are not abstract, they are real.

‘They can be counted in jobs lost, businesses closed and children’s education harmed. 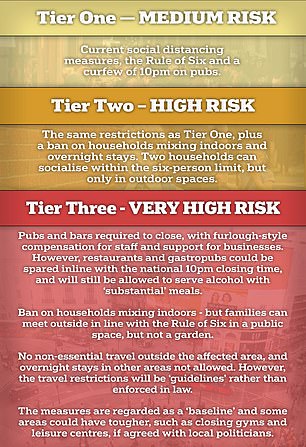 Chancellor of the Exchequer Rishi Sunak has defended using local lockdowns, saying they prevent the need for a nationwide scheme

‘This is not about choosing one side or the other. It is not about taking decisions because they are popular.

‘It is not about health vs wealth or any other simplistic lens we choose to view this moment through.

‘The Prime Minister was absolutely right when he set out our desire for a balanced approach, taking the difficult decisions to save lives and keep the R-rate down while doing everything in our power to protect the jobs and livelihoods of the British people.

‘And the evidence shows a regional, tiered approach is right because it prevents rushing to another lockdown.

‘The entire country would suffer rather than targeting that support, preventing a lockdown in parts of the country where the virus rates are low.’

Labour also demanded greater support for the north of England, the Midlands, Scotland, Wales and Northern Ireland as they deal with extra restrictions.

The Opposition’s Commons motion added the job support scheme should be reformed to incentivise employers to keep staff on, fix ‘gaps’ in support for the self-employed and extend the ban on evictions.

Mr Sunak last week announced workers in pubs, restaurants and other businesses forced to close under the new restrictions would have two-thirds of their wages paid by the Government under an expansion of the job support scheme. 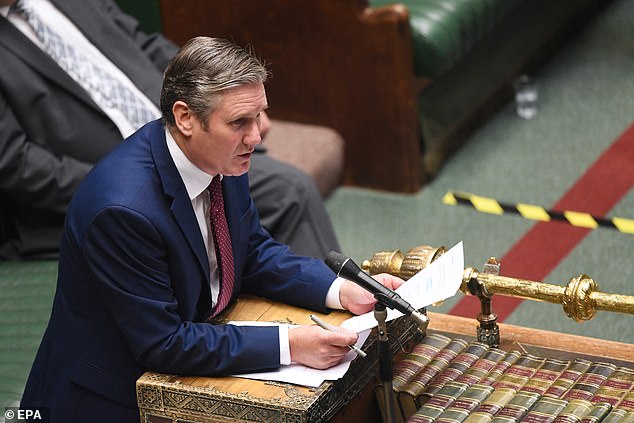 Labour leader Sir Keir Starmer had called for circuit-breaker, prompting an attack from Mr Sunak who said the country could not ‘blithely fall into another national spring-style lockdown’

Speaking in the Commons, the Chancellor said the ‘stark reality’ of the economic and social impact of another national lockdown must be acknowledged.

In an attack on Labour, Mr Sunak added: ‘We can’t just let the virus take hold but nor can we blithely fall into another national spring-style lockdown as the party opposite now wants to do, rather than following our regional tiered and localised approach.’

The Chancellor went on: ‘We need a balanced approach, we need a consistent approach, and we also want a cooperative approach. But any responsible party calling for a shutdown of our entire country should be honest about the potential costs – economic and social – of such a dramatic measure.

‘At the very least they should have the integrity to acknowledge that what they’re proposing will create significant damage to people’s lives and livelihoods.

‘I’ve never said there are easy choices or cost-free answers, this is the reality we face and it’d be dishonest to ignore that truth.’ 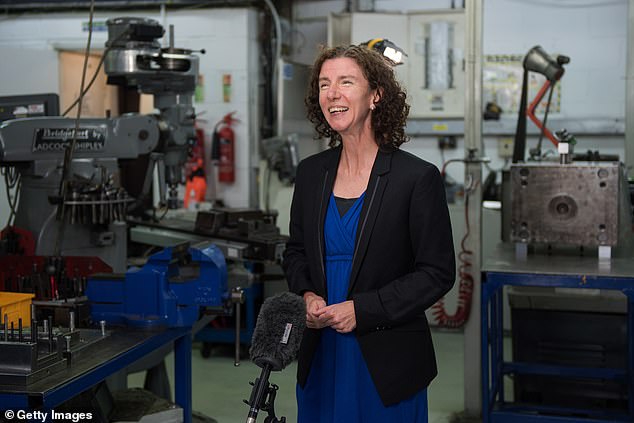 She said: ‘If we continue as we are without taking control of the public health situation then we’ll see a worse situation for jobs and businesses in our country.

Ms Dodds added: ‘Every week of that inaction will hit business and consumer confidence, costing more jobs and livelihoods and with more businesses going to the wall.

The circuit-breaker must be used to fix Test and Trace and devolve it to local areas, Ms Dodds argued.