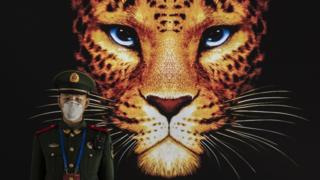 A new respiratory virus first detected in the Chinese city of Wuhan has infected hundreds of Chinese citizens and claimed a number of lives.

Here are six maps and graphics that will help you understand what is going on.

1. Cases have been mainly in China

Hundreds of patients have been infected with the virus across China, with central Hubei province the worst-affected.

The World Health Organisation (WHO) is warning the number of cases is likely to rise further, and Chinese authorities have introduced a number of measures to try to halt the virus’s spread.

Travel restrictions have been imposed on a number of cities in Hubei province and people have been asked to wear face masks in public places.

The Chinese government has also closed a number of temples, the Forbidden City and part of the Great Wall.

The growing list of restrictions comes at the beginning of a week-long holiday celebrating Lunar New Year – one of the most important dates in the Chinese calendar – when millions of people travel home.

The WHO has not yet classed the virus as an “international emergency”, partly because of the low number of overseas cases, but said it “may yet become one”.

“Make no mistake, this is, though, an emergency in China,” said WHO director-general Dr Tedros Adhanom Ghebreyesus.

More than 500 cases have been recorded in Hubei province – the centre of the virus outbreak.

Restrictions on travel are affecting at least 20 million people across 10 cities – including the capital Wuhan, where the virus emerged.

Its origins have been linked to the city’s seafood market.

Wuhan – which has a population of 11 million people – has gone into lockdown, with authorities suspending flights and train services in and out of the city.

“My university is checking every student’s body temperature every day and are offering free masks. It also has its own hospital and ambulance,” Chongthan Pepe Bifhowjit, an Indian student at the Wuhan University of Technology, told the BBC.

In a bid to tackle the increased demand for medical services, the authorities are building a new 1,000-bed hospital in the capital.

State-owned news outlet Changjiang Daily said the hospital could be ready by 3 February. A total of 35 diggers and 10 bulldozers are currently working on the site.

3. There have been some cases elsewhere

Outside China, confirmed cases have been recorded in Thailand, Vietnam, Taiwan, South Korea, Singapore, Nepal, Japan, the US and France.

Other nations are investigating suspected cases, including the UK and Canada.

Many authorities have announced screening measures for passengers from China, including the major airport hubs of Dubai and Abu Dhabi.

Taiwan has banned people arriving from Wuhan, and the US state department warned its nationals to exercise increased caution in China.

4. The symptoms are respiratory

Coronaviruses are common, and typically cause mild respiratory symptoms, such as a cough or runny nose.

This outbreak – known as novel coronavirus (nCoV) – is a new strain that has not been previously identified in humans.

It seems to start with a fever, followed by a dry cough and then, after a week, leads to shortness of breath.

But in more severe cases, infection can cause pneumonia, severe acute respiratory syndrome, kidney failure and even death.

Most victims have been elderly people, suffering from other chronic diseases including Parkinson’s and diabetes.

Peter Piot, professor of global health and director of the London School of Hygiene & Tropical Medicine, said the “good news” was that data suggested the virus may have a lower mortality than Sars.

There was also a diagnostic test and greater global sharing of information than previously, he said.

“And that is essential because you cannot deal with a potential pandemic in one country alone.”

There is not yet a specific anti-viral treatment for the infection, so people with the virus are currently being treated for their symptoms.

5. You can do things to reduce your chances of catching it

The WHO is advising people in affected areas to follow standard procedures to reduce the chance of catching the virus.

They include hand and respiratory hygiene as well as safe food practices.

People are advised to avoid close contact with people suffering from acute respiratory infections; wash hands regularly, especially after direct contact with ill people or their environment; and avoid unprotected contact with farm or wild animals.

Those with symptoms of coronavirus should practise “cough etiquette”, including maintaining distance, covering coughs and sneezes with disposable tissues or the inside of an elbow, and washing hands.

The WHO has said that while there is evidence of transmission between people in close contact, such as families or those in healthcare settings, there is not yet evidence of onward transmission.

6. If a case is suspected, there are processes to follow

The Chinese government has classified the outbreak in the same category as the Sars epidemic.

This means people diagnosed with the virus in the country must be isolated and can be placed in quarantine.

Within healthcare facilities, the WHO advises staff to implement enhanced standard infection prevention and control practices in hospitals, especially in emergency departments.

The WHO advises that patients should be assessed quickly and treated for the level of severity of the disease they have – mild, moderate, or severe.

In the UK, family doctors – GPs – are being advised to place patients suspected of having coronavirus in isolation and avoid physical examinations.

Official guidance from Public Health England (PHE) says patients should remain in a room away from other patients and staff and be prevented from using communal toilets.

The UK government’s emergency committee, Cobra, has held a meeting to discuss the outbreak.