China sanctions 11 US politicians, officials over action on Hong Kong

Beijing: China has announced unspecified sanctions against 11 US politicians and heads of organisations promoting democratic causes, including Senators Marco Rubio and Ted Cruz, who have already been singled out by Beijing.

Foreign ministry spokesperson Zhao Lijian on Monday said the 11 had "performed badly" on issues concerning Hong Kong, where China has cracked down on opposition voices following its imposition of a national security law in the semi-autonomous southern Chinese city last month. 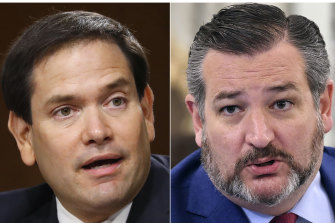 Senators Marco Rubio, left, and Ted Cruz were among 11 people singled out by Beijing. Credit:AP

The number of Americans named by the ministry exactly equals the number of Hong Kong and Chinese officials placed on a sanctions list by the US last week over the crackdown.

China showed its determination to defy such pressure on Monday by arresting leading independent media tycoon Jimmy Lai and raiding the publisher's headquarters.

"The relevant actions of the US blatantly intervened in Hong Kong affairs, grossly interfered in China's internal affairs, and seriously violated international law and the basic norms of international relations," foreign ministry spokesperson Zhao Lijian said at a daily briefing on Monday.

"China urges the US to have a clear understanding of the situation, correct mistakes, and immediately stop interfering in Hong Kong affairs and interfering in China's internal affairs."

The standing committee of China's national legislature passed the National Security Law last month, bypassing the city's Legislative Council and the public, where such legislation has faced stiff opposition for years.

The move came in response to months of sometimes violent anti-government protests last year that Beijing said were encouraged by foreign forces in a bid to overthrow Chinese rule over the former British colony that was handed over to Chinese rule in 1997 under a "one country, two systems" framework meant to last until 2047.