Australian exporters to China are angry with the Morrison government's handling of the trade relationship between the two economies, accusing the government of abandoning them as Beijing's trade tactics and propaganda show the first signs of significant political impact.

Local wine exporters say they are being told they can not ship to China and barley is being rejected by Chinese importers. Australian timber, copper, and coal are also facing restrictions and tonnes of live lobster has died on the tarmac at a Shanghai airport.

The fallout from verbal directives by Chinese customs agents to stop importing seven Australian products from Friday has rattled markets and forced other exporters to keep their stock in Australia to avoid being rejected by Chinese authorities. 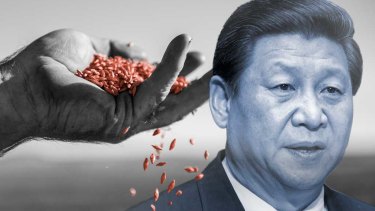 WA barley has been banned for import by Chinese customs.Credit:Bloomberg

The Commonwealth Bank estimates the verbal instructions, which have been repeated by Chinese state media but not the Chinese government, now threaten to cover more than $27 billion of Australia's exports to China if they were applied across entire industries.

The Chinese government has also urged students and tourists to travel elsewhere, leaving Australia facing a $45 billion hit – 10 per cent of Australia's annual exports – as the economy attempts to recover from the coronavirus without the support of its largest trading partner.

The Australian government has joined other countries in condemning the Chinese Communist Party's actions in Hong Kong, Xinjiang and the South China Sea. But it drew the specific ire of the Chinese government in April for first lobbying for an independent inquiry into the coronavirus and banning telecommunications giant Huawei from the 5G network in 2018 over national security concerns.

"The whole objective is to create fear and paranoia about exporters," Dr Wilson said. "You can wind up the entire industry and get them to do that political screaming on your behalf."

WA Labor Premier Mark McGowan called on the Morrison government to rethink its position on China on Friday after China's Acting Consul-General Jin Qian told The West Australian that WA should sign up to Beijing's $1.5 trillion Belt and Road infrastructure initiative and begin a "new direction of co-operation".

The envoy's intervention, aimed at driving a wedge between state leaders, business and the federal government, was backed up by the China Daily, the Chinese Communist Party's international propaganda arm on Friday.

The state media outlet said in an editorial that Australia would "suffer further pain" for fuelling anti-China sentiment at home, sanctioning Chinese companies, sending warships to China's doorsteps in the South China Sea and colluding with Washington. "Australia will pay tremendously for its misjudgment," it said.

Fruit and wheat farmers are also watching Chinese markets closely after further reports of imminent trade restrictions at Shanghai markets being implemented on Friday. There are growing concerns the particular industries targeted could be used to make up some of China's quotas under the US-China trade deal signed by US President Donald Trump to ease tensions after an 18-month trade war.

"We have to remember trade is a zero sum game, buying from one country will detract purchases from another country ‑ without a lift in demand," said Commonwealth Bank economist Belinda Allen. "As a result, we could be seeing substitution from Australia to US for certain products."

Premium Grain director John Orr said he was "appalled and really bloody angry" at the federal government for not fixing the relationship. Mr Orr said barley shipments to China had been blocked and it was the only post-COVID growth market for his product, leaving the business potentially un-viable.

"The impact of that is going to destroy thousands of livelihoods and push our economy further into recession," he said. "The whole economy will suffer from their incompetence."

Department of Agriculture negotiators urged Australian farmers to diversify into other markets on Thursday in crisis meetings with industry. "They tell us to diversify, but is the only growth market at the moment," said Mr Orr. China and Taiwan are the only two major economies in the world forecast to grow this year. 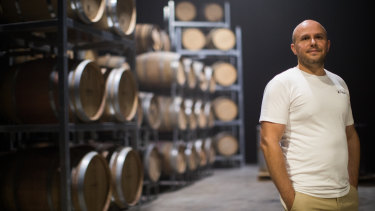 Rod Micallef, owner of Zonzo Estate has been exporting wine to China since 2017, and its latest shipment was due to depart today. But that plan hit a hurdle on Wed, during an inspection by the shipping company. Credit:Jason South

Victorian Yarra Valley winery owner Rod Micallef’s latest cargo of wine awaiting shipment to China was blocked on Wednesday after it was told it would not make it in time for the November 6 deadline.

Three shipping company workers had come to assess $140,000 of Zonzo Estate’s Cabernet and Shiraz as it sat on 12 pallets. Mr Micallef, the owner of Zonzo, had witnessed these inspections many times, having exported about 30 China-bound shipments since 2017. He has invested more than $1.5 million developing his business in China.

"When they came for their inspection they were all positive and happy… however about 20 minutes in they got a phone call and it pretty much all changed from there," he said. "They weren’t willing to take the product because they said it might have to come back."

Labor's trade spokeswoman Madeleine King said the government did not have a plan to resolve the situation. Labor has to date largely held a bipartisan view on Australia's foreign policy on China.

Dr Wilson said the rising political pressure showed China's coercive tactics were working. He said he expected China to continuing targeting individual shipments while allowing broader trade to continue, particularly in resources, which make up the bulk of Australia's more than $100 billion in exports to China each year.

He estimated the actual impact of the disruption to be $5 billion but the political impact to be larger as concerns over each shipment get magnified by industry and politics, and exporters hold back stock fearing they will lose it.

"We have already changed our behaviour," he said. "There is a situation developing here in which we are sanctioning ourselves."

Defence Minister Linda Reynolds on Thursday alluded to the tactics as a threat to the Indo-Pacific without naming China.