The Health Secretary announced at the start of April that the number of tests would hit six figures a day by the end of the month and this morning he said he believes he will deliver on the promise.

But Professor Chris Whitty told MPs this afternoon that the Scientific Advisory Group for Emergencies (SAGE) had not signed off on the number.

Mr Hancock has previously faced accusations that the 100,000 figure he announced was not underpinned by any scientific evidence. 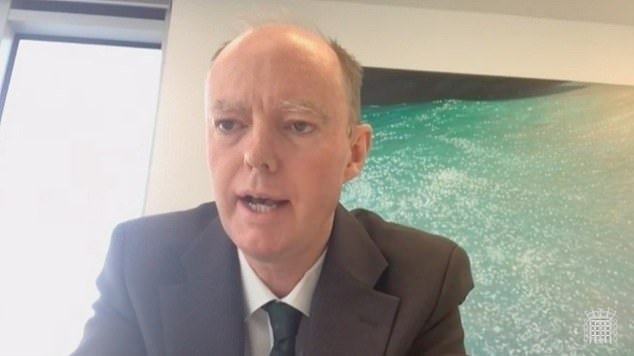 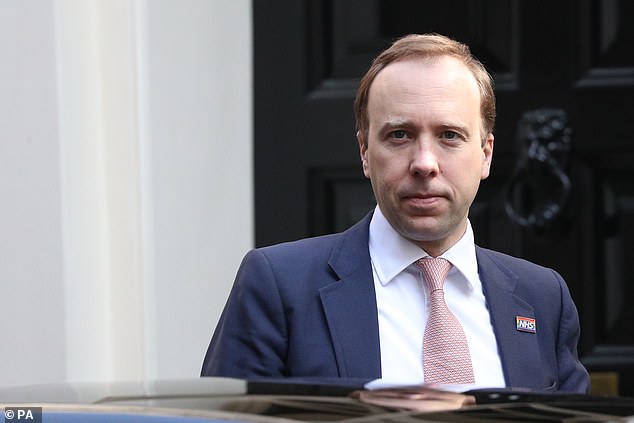 Mr Hancock, pictured in Downing Street today, said he believes he will reach the 100,000 number by the end of April

Greg Clark, the Conservative chairman of the Science and Technology Select Committee, asked Prof Whitty if SAGE had advised the government on the target.

Prof Whitty said the panel had not recommended 100,000 as a specific goal but had stressed the importance of ramping up testing capacity.

He told the committee: ‘SAGE did not give that specific target. SAGE has consistently said and indeed I have consistently said that one of the things we needed to do is have a greater capacity to test across the whole of the UK.

‘That I have to say now is happening. So the aim to increase it would absolutely be joined not just by SAGE but to be clear by all public health bodies and ministers.

‘I think that the main questions on that one were operational – how fast could this increase happen.

‘But the actual number was not a specific number recommended by SAGE specifically but the general trend of it, absolutely.

‘SAGE thinks there are quite a lot of things that can be done with testing and that therefore increasing it is very important for several reasons.’

Prof Whitty also revealed that SAGE is yet to determine what the ‘optimal maximum’ amount of testing for the UK will be.

‘SAGE is in fact developing a view at the moment about what the optimal maximum amount of antigen testing and indeed antibody testing – those are different answers – under a number of different scenarios,’ he said.

‘But there is a base case that everybody agrees that has to be done which includes patients, includes allowing critical workers to be tested, it certainly includes greater testing within hospitals of people who don’t currently have symptoms for example people who might be coming in for elective things, and greater testing in care homes.

‘What we are trying to do is get that basic number and then also build on top of that what are the other things that we could use it for under a number of different ways of running the next stage of the epidemic which is going to be a long one and therefore giving advice to all four nations but the UK as a whole about what they think broadly the numbers might end up looking like if we could get to an optimal number.

‘But we have not yet got to the point where we have finally got a number on that.’

Downing Street has confirmed that in the 24 hours up to 9am on Thursday, 23,560 tests for coronavirus were carried out.

Mr Hancock said this morning that the government is actually ‘ahead of the plan’ in terms of trying to reach 100,000 by the end of the month.

Asked if he believed that the government will be carrying out 100,000 daily tests by the start of May, the Health Secretary replied: ‘I do, yes. I do, but nothing is guaranteed in life.’