Bangkok: The US has ordered an arms embargo on Cambodia, citing deepening Chinese military influence, and corruption and human rights abuses by the government and armed forces.

The added restrictions on defence-related goods and services, issued by the US State and Commerce departments, are due to be published and take effect on Thursday, US time.

A notice in the US Federal Register said developments in Cambodia were “contrary to US national security and foreign policy interests”. 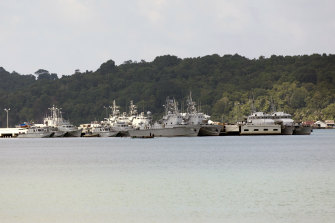 Vessels are moored at the Ream Naval Base near Sihanoukville, Cambodia. A Chinese company was granted a 99-year lease in 2018 for 33 square kilometres of the coastline that falls within Ream National Park to develop a resort. Credit:Bloomberg

The aim of the embargo is to ensure that defence-related items are not available to Cambodian military and military intelligence services without advance review by the US government, it said.

Since direct military ties between the two countries were restored in 2006, the US has pledged millions in military aid, initially to help improve the south-east Asian nation’s border security and peacekeeping operations.

China is Cambodia’s biggest investor and closest political partner. It was the chief backer of the murderous regime of Pol Pot in the 1970s and has long maintained strong relations with Hun Sen, who has grown increasingly repressive.

Beijing’s support allows Cambodia to disregard Western concerns about its poor record in human and political rights, and in turn Cambodia generally supports Beijing’s geopolitical positions on issues such as its territorial claims in the South China Sea.

The construction of new Chinese military facilities at Cambodia’s Ream Naval Base is also a point of strong contention with Washington.

The latest restrictions follow the Treasury Department’s ordering in November of sanctions against two senior Cambodian military officials for corruption and come amid increasing concern about Beijing’s sway.

At the time, the US government issued an advisory cautioning American businesses about potential exposure to entities that “engage in human rights abuses, corruption and other destabilising conduct.”

Cambodia branded those sanctions as “politically motivated” and said it would not discuss them with Washington.

The US has similar controls on exports of items that might be diverted to “military end users” in Myanmar, China, Russia and Venezuela.

US exports to Cambodia in 2019 totalled $US5.6 billion ($7.8 billion). The amount of military-related exports was not immediately available. The US is the largest export market for Cambodia, a major garment manufacturing hub, but three-quarters of Cambodia’s imports are from China and other countries in Asia.

The Ream Naval Base faces the Gulf of Thailand, adjacent to the South China Sea, where China has aggressively asserted its claim to virtually the entire strategic waterway. The US has refused to recognise China’s sweeping claims, and the navy’s 7th fleet routinely sails past Chinese-held islands in what it terms freedom of navigation operations.

In recent years, Hun Sen’s government has cracked down on the political opposition, shut media outlets and forced hundreds of Cambodian politicians, human rights activists and journalists into exile.

Human rights groups say the government has engaged in arbitrary arrests and other abuses and worked to portray peaceful dissent over corruption, land rights and other issues as attempts to overthrow the government.

Corruption is another major concern.

The Treasury Department sanctions targeted the director general of the defence ministry’s material and technical services department and a commander in the Royal Cambodian Navy.

In a statement, Treasury alleged that in 2020 and 2021, the two conspired with other Cambodian officials to inflate costs of a construction project at the Ream base and then planned to use the funds for their benefit.

Washington has protested over work done at Ream, which officials said involved the demolition of two US funded buildings without notification or explanation to the US.