Columbine: the shooting other teen gunmen measure themselves by

Sante Fe, Texas: The exact reasons why a teenage gunman shot his fellow students and teachers here at Santa Fe High School remain a mystery. His model for carrying it out is more clear.

The 17-year-old junior wore a black trench coat and fired a sawed-off shotgun, the same attire and weaponry used by the two gunmen who killed a dozen students and a teacher at Columbine High School in Colorado in 1999. 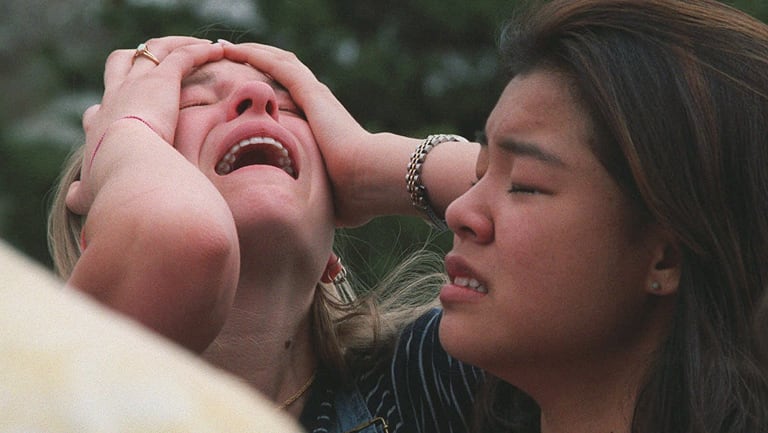 Students react at a triage area near Columbine High School in Littleton Colorado during the shooting rampage by two students in 1999.

He wore a T-shirt with the phrase "Born to Kill" on it in bold, similar in design to those worn by the Columbine attackers, which read "Wrath" and "Natural Selection."

His crude arsenal included canisters of carbon-dioxide gas and Molotov cocktails, two types of explosives used by the Columbine gunmen.

The picture he had posted of his trench coat on Facebook showed a small red-star medallion with the Communist hammer-and-sickle on the collar, the same type of button a Columbine gunman attached to his boot.

It was not the first time a high school suddenly engulfed in gunfire and death found itself looking for clues in the random symbology of a nearly 20-year-old mass shooting that has become, it seems, the standard by which youthful gunmen across America have come to measure themselves. 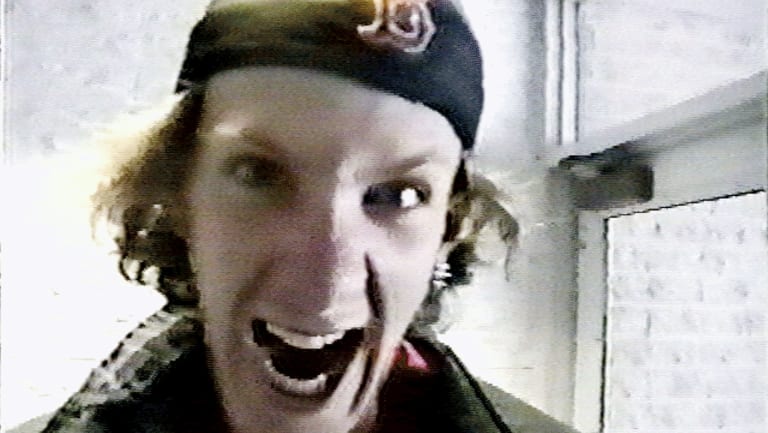 Columbine High School student Dylan Klebold yells into the camera in this image made from video released by the Jefferson County Sheriff’s department in 2004.

The 20-year-old attacker who killed 26 people at Sandy Hook Elementary School in Connecticut in 2012 had compiled an enormous mass-murder spreadsheet and materials on the Columbine attackers on his computer, including what appeared to be a complete copy of the official Columbine investigation.

In his manifesto, the 23-year-old student who shot and killed 32 people at Virginia Tech in 2007 had called the Columbine gunmen by their first names and described them as "we martyrs."

The May 18 mass shooting at Santa Fe provides the latest evidence of a phenomenon that researchers have in recent years come to recognise, but are still unable to explain: The mass shootings that are now occurring with disturbing regularity at the nation's schools are shocking, disturbing, tragic — and seemingly contagious.

Interviews with law enforcement officials, educators, researchers, students and a gunman's mother, as well as a review of court documents, academic studies and the writings of killers and would-be killers, show that the school-shooting copycat syndrome has grown more pervasive and has steadily escalated in recent years. And much of it can be traced back to the two killers at Columbine, previously ordinary high school students who have achieved dark folk hero status — their followers often known as "Columbiners"— in the corners of the internet where their carefully planned massacre is remembered, studied and in some cases even celebrated. 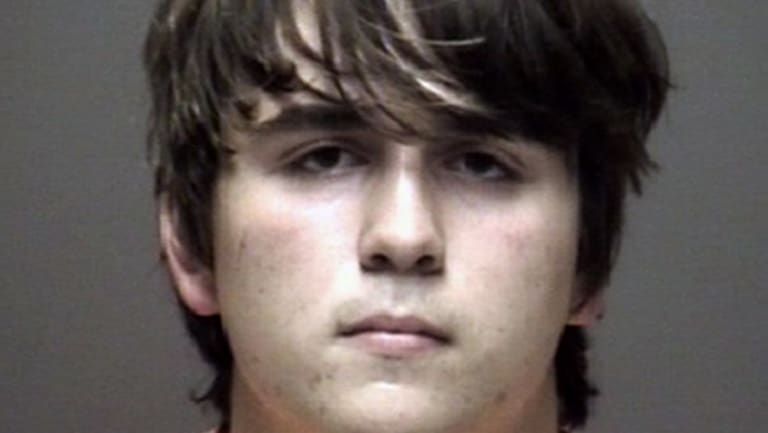 Dimitrios Pagourtzis has confessed to the Santa Fe, Texas shootings.

Investigators say school shootings have become the American equivalent of suicide bombings — not just a tactic, but an ideology. Young men, many of them depressed, alienated or mentally disturbed, are drawn to the Columbine subculture because they see it as a way to lash out at the world and to get the attention of a society that they believe bullies, ignores or misunderstands them.

On Wednesday, authorities in Florida released chilling mobile phone video taken by the gunman in the Parkland school shooting. "I'm going to be the next school shooter of 2018," he said. "My goal is at least 20 people, with an AR-15 and a couple tracer rounds."

He continued: "It's going to be a big event. When you see me on the news you'll all know who I am." He then was shown laughing, and singing the words, "You're all going to die."

The seemingly contagious violence has begun branching off Columbine, researchers say, and is now bringing in more recent attacks, many of them building off the details and media fixation with the last. School gunmen have admitted to investigators that they were now effectively competing with other attackers, in trying to come up with deadlier tactics, and in trying to kill the most people. 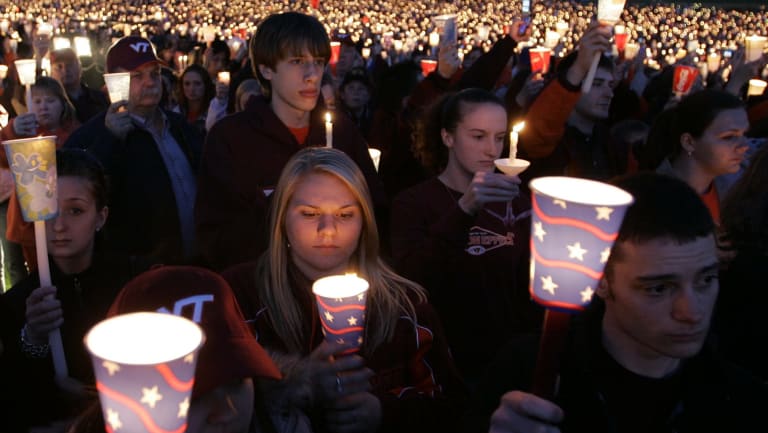 A candlelight vigil following the shootings on the Virginia Tech campus in Blacksburg, Virginia.

"The phenomenon is feeding on itself," said Peter Langman, a psychologist who is the author of Why Kids Kill: Inside the Minds of School Shooters and who runs the website SchoolShooters.info. "It's gaining momentum, and the more there are, the more there will be."

Langman has created a mass-shooter diagram tracking the influence Columbine has had on more than 30 other rampage attacks at schools and elsewhere, from California to Germany. The diagram resembles a corporate flowchart, with lines branching out and intersecting, but all of them flowing out of two names: the Columbine killers.

"I do believe there is a contagion," said Sue Klebold, 69, the mother of one of the two teenage gunmen in the Columbine attack.

Klebold said her son and her son's friend helped set a template for others, leading young people with depression, thoughts of suicide or other struggles to believe a mass shooting is an escape route. A confluence of forces — including news coverage of attacks, social media, community disconnection and ready access to lethal weapons, she said — has reinforced and spread that mistaken notion. 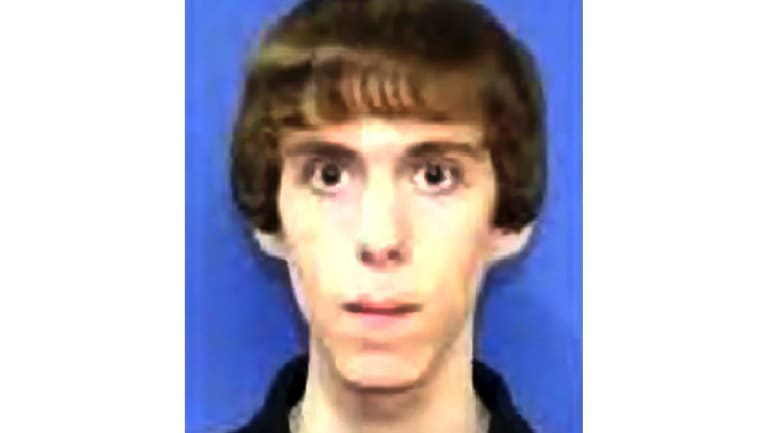 Adam Lanza who killed his mother at their home and then opened fire inside the Sandy Hook Elementary School in Newtown, Connecticut in 2012.

"We don't do this intentionally, but we glorify shooters by showing the damage they've done — all the crying, all the empty seats — and for people with rage that has a particular appeal for them," Klebold said.

On the other hand, researchers said, the fabric of events and motivations that culminate in school shootings inevitably are more individual and complex than simple copycat crimes.

"Maybe he got the trench coat idea from Columbine, but not the will to kill," said James Alan Fox, who is a criminology professor at Northeastern University in Boston and who studies mass shootings. "Seeing someone else do something won't take a perfectly happy individual and make him decide to pick up a gun and go shoot students."

In recent years, some school shootings have borne the hallmarks not just of Columbine, but of subsequent attacks. 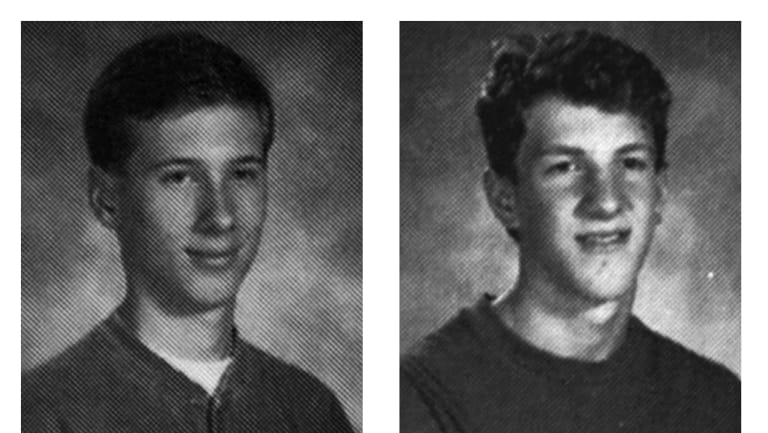 Columbine High school shows 1998 yearbook photos of students Eric Harris, left, and Dylan Klebold, who killed 12 students and a teacher before taking their own lives.

In the wake of a 2015 shooting in which a gunman killed Virginia news reporter Alison Parker, and a photojournalist Adam Ward on live television, a young man in Oregon took to his blog, and noted how the story of the gunman was being covered by news outlets.

"On an interesting note," the 26-year-old man wrote, "I have noticed that so many people like him are all alone and unknown, yet when they spill a little blood, the whole world knows who they are." He added, "Seems the more people you kill, the more you're in the limelight."

He had also uploaded a documentary about the Sandy Hook shooting.

But Columbine, it seems, remains the template — a legacy of which the school outside Denver is ever mindful.

One late-August afternoon at Columbine in 2006, more than seven years after the massacre, the principal's office was suddenly responding to another shooting.

But this one wasn't at Columbine. It was at a high school nearly 2500 km away in North Carolina.

An 18-year-old man in Hillsborough, North Carolina, sent an email to the Columbine principal, Frank DeAngelis, claiming responsibility for a school shooting that the principal would soon hear about. "Dear Principal," the young man wrote in a seven-sentence email. "I remember Columbine. It is time the world remembered it."

DeAngelis and school administrators scrambled to notify the authorities. They were too late: The young man had killed his father and driven to Orange High School in Hillsborough, opening fire in a parking lot and wounding two students. He was wearing a black trench coat, like the Columbine attackers, and was armed with a sawed-off shotgun he named Arlene — as one of the Columbine killers had. He called his attack "Operation Columbine."

There was another case, five years later. DeAngelis said a 16-year-old high school student from Utah came to the school to interview him. The boy claimed to be a budding journalist and asked seemingly innocuous questions about the recovery process. Weeks later, DeAngelis received a call from police: The student had been arrested in Utah for plotting with another student to set off a bomb during a school assembly, admitting to authorities that he was "fascinated" by Columbine.

"It worries me that even now, kids who were not even born during Columbine High School are still making reference to Columbine," said DeAngelis, 63, who retired in 2014. "I don't want people to feel helpless and hopeless, but I think what those two did, what they wrote in their journal is: 'We'll never be forgotten' and 'We'll be remembered forever.' And I believe they're fulfilling that."

While so-called Columbiners have been a regular phenomenon on websites and internet chat rooms, there appears little doubt that the front-page headlines and mug shots splashed across television can become a powerful motivating factor.

The role of the media in turning school gunmen into household names and perpetuating "the infamous legacy they desire" can be shown to have inspired additional attacks, researchers at Western New Mexico University reported recently. There have been growing calls for withholding the names and biographies of school gunmen from newspaper and television coverage. The New York Times regularly identifies and profiles the perpetrators, though in order to focus attention on the issue of school shootings and not on the gunmen themselves, this article does not name any of them.

A number of the suspects who have carried out or planned school shootings not only wear the same clothing, read the same books and adopt the same tactics; some have even contacted the victims of previous shootings before they attempt their own attacks.

An 18-year-old man who was arrested in Vermont in February and accused of planning a mass shooting at his old high school had contacted a student he knew at the Parkland, Florida, high school where a mass shooting occurred in February "because he wanted to know how it made her feel and what it felt like being inside the school," a police report said.

Klebold, the mother of one of the Columbine attackers, said she was shocked by the number of letters she receives from people who relate to her son: "The girls who say, 'I wish I could have his baby'"; others who say that her son, to them, is "heroic." Even seeing images of the Santa Fe gunman's Communist hammer-and-sickle medallion — just like the one that her son wore, a gift from a friend's parent who went to Russia — was painful to her.