Coors Field cats: A look at the feral felines that inhabit the ballpark 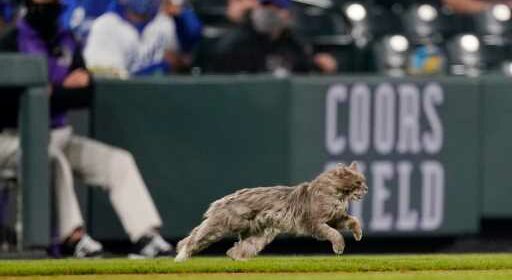 Glowing yellow eyes encased by fluff surveil the streets of Denver’s Ballpark district surrounding a kingdom built on the back of baseballs, bats and feral cats — a tried-and-true American tail.

On Friday night, one bold feline dared to go where few of its comrades have trod before — going viral by darting across a Major League Baseball field mid-game — and stole the collective hearts of sports fans the nation over.

But in the bowels of the ballpark lurks a pack of the feral felines, according to those who frequent Rockies games. They’re the cats of Coors Field, and their fans say they help keep the joint — and the mice — running.

A few facts about the felines whose street smarts put Dinger to shame: They’ve amassed a loyal fanbase, complete with paparazzi. They’ve called LoDo home for decades, even before Coors Field was constructed. And they’re elusive.

While a Rockies spokesman told The Denver Post over the weekend that a number of feral cats live around the ballpark, the team’s PR squad turned down a subsequent request to discuss the stadium’s clandestine cat residents.

A ballpark employee eager to share photos and video of the beloved animals refused to talk on the record for fear of retribution for daring to speak out about the winningest beasts in the stadium.

And this reporter, who may or may not have circled the park’s perimeter trailing catnip and emitting the “pspspsps” cat call only to be cold-shouldered, suspects the cats aren’t talking, either.

“I had heard for many years about the cats in Coors Field from friends who work for the team,” said Shannon Hurd, a Rockies super fan and season ticket holder.

One cat Hurd said doesn’t shy away from the limelight: Coors Field Cat.

No, not the gray streak that stormed the diamond on Opening Day, but a dapper black-and-white feline with a pink nose spotted so frequently that he or she is the subject of a Twitter account run by Hurd.

Hurd, a 34-year-old living in Highlands Ranch, considers the stadium her second home. No home is complete without a pet, and Hurd is lucky to have a crew of kitty friends at Coors Field.

“I almost always see one,” Hurd said of her visits to the ballpark. “I still dream of one running across my lap. I would be the person trying to catch it and take it home.”

Hurd’s love of the game and four-legged friends led Coors Field employees to start sharing photos, videos and lore of the furballs that roam the stadium so she can share them on the @CoorsFieldCat Twitter account.

The account shows kitties hiding under cars in the players’ parking lot, dashing below stadium kiosks and chilling in a nook in the building facade high above the ground floor.

“Legend has it that one time one of them pooped on home plate,” Hurd said. “Not during a game, of course.”

Derek Kessinger, who used to work in Coors Field concessions, spotted cats frequently when the park was largely empty. He treasures a 2018 photo he snapped of one black beauty hanging out near a stairway.

“The idea of living at a ballpark is so cool,” Kessinger said. “Coors Field is great for fans, but there’s nothing better than being one of the only people in the stadium. If you were a cat, that’s a perfect life — just laying out in the sun at the ballpark.”

The cats are likely to have a long and storied future at Coors Field, Hurd said, showing off photos of kittens in the ballpark learning the ropes from their acclaimed parents.

Barbara Ford, who worked as a Denver parking meter reader in the late 1980s and early ’90s, said a feral cat colony has lived in the Ballpark neighborhood for decades.

With a route that took her through the area where Coors Field was built in 1995, Ford said she ran into and cared for feral cats near 20th and Larimer streets regularly.

“I carried cat food and water for them in my car,” Ford said. “There were dozens and dozens. It used to be a bunch of old warehouses in the area, and they were all over. I even snagged a few kittens.”

Ford wondered whether anybody was watching over the Coors Field cats now. Sometimes a cat colony attracts an animal lover who traps, neuters and releases — an activity known as TNR — the feral kitties, Ford said.

Calls to local vets and TNR aficionados in the area didn’t turn up much in the way of the cats of Coors Field except a keen interest from some to get involved.

Jenni Leigh, a local kitten rescuer and TNR advocate, called around to her fellow TNR friends and couldn’t find anyone who laid claim over the Coors Field cats, so she decided to reach out to the Rockies and see if she could help get the cats trapped, neutered, vaccinated and released back to their LoDo home.

As of Wednesday, Leigh had yet to hear back — what could possibly be diverting the attention of ballpark staff this week? — but she was determined to be of assistance after repeatedly watching the viral video of the courageous kitty that leaped onto the field last week.

“Cat ladies all over the world are now thinking about the Coors Field cats, so now’s the time to make sure they’re taken care of,” Leigh said.

As for Hurd, she plans to continue her Twitter account, which has seen a 20% jump in followers since the gray kitty took to the field last weekend.

“I dream of the day I could pick one up, take it home, name it after a player — something like Nolan Paw-anado or Charlie Black Cat — and build it a little house that looks just like Coors Field,” Hurd said.