Coors’ Five Trail whiskey review: Is it any good? 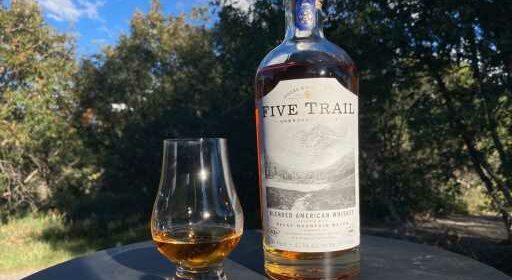 The first time David Coors suggested to his father that their beverage company make a whiskey, the elder Coors scoffed at the thought.

“He goes, ‘We’re good at making one thing, and that’s beer,’” said Coors, now part of the fifth generation to work in the family business at Molson Coors Beverage Co. “I said ‘OK, yes sir,’ and end of discussion.”

But that was not the end of David Coors’ daydream. In September, his idea came to fruition when the newly established Coors Whiskey Co. debuted Five Trail whiskey, the first spirit ever released by the beverage giant.

That the liquor bears the Coors name makes it a sure target for skeptics. Coors said his team thought diligently about where to put that oh-so-famous brand on the bottle and how prominently. Ultimately, designers landed on featuring it at the top of the label above the Five Trail moniker and a black-and-white image of a snow-dusted Maroon Bells.

“We wanted people to be intrigued by that and we know there’s an affinity, with some research, that consumers are open to a spirit or a whiskey from a brewer,” Coors said. “So we knew that having it on there wouldn’t be a negative. But also Coors Light and Coors Banquet are known as more of your mainstream premium light and regular lagers and then coming out with a $60 bottle of whiskey? What does that mean?”

The label is enough to catch any Coloradan’s eye while perusing the whiskey aisle. But is the liquor tasty enough to warrant a purchase? This self-proclaimed beer and whiskey snob tried it recently — and would say it’s worth a shot.

Five Trail is a blended whiskey, meaning that because Coors does not have its own distillery, the company purchased several already-made liquors that it mixed together to create an original flavor profile. The blend is 45% wheated bourbon from Indiana; 35% four-grain bourbon from Kentucky; 15% Colorado single malt distilled from Coors’ own barley; and 5% 13-year-old bourbon from Kentucky. (Coors declined to name the local distillery that created the single malt.)

When Coors suggested drinking it straight with a couple of drops of water, as you do with refined whiskeys, I’ll admit I thought it was an ambitious ask. At 95 proof, I expected the liquor to land hot, like a fiery kick to the mouth that would overpower any grain or barrel flavors and make me hiss like a cat. In fact, the scent of alcohol is what dominates the aroma alongside an ever-so-subtle touch of maple syrup.

But I was delightfully surprised. Five Trail whiskey is light in body and delicate on the palate. Notes of caramel and vanilla develop into a spicy, grainy character that lingers until dissipating into a brown-sugar-like flavor. It’s bold yet balanced, and finishes sweet without being cloying.

The Colorado single malt is what adds grassy, earthy elements to balance out the sweetness of the bourbons, Coors said. And, certainly, the 13-year-old spirit adds complexity to the blend so that it doesn’t taste flabby or one-dimensional.

At $60 per bottle, Five Trail whiskey is more expensive than my favorite tipple, Baby Blue corn whiskey by Balcones Distilling, which retails for about $40. But since that first taste test, I have helped myself to several more glasses on the rocks. And that probably says more about Five Trial whiskey’s drinkability than anything else.

Subscribe to our new food newsletter, Stuffed, to get Denver food and drink news sent straight to your inbox.