One new case of COVID-19 was detected in a returned overseas traveller in hotel quarantine on Saturday, bringing the number of cases being treated to 51. Two people are in intensive care; neither are ventilated. 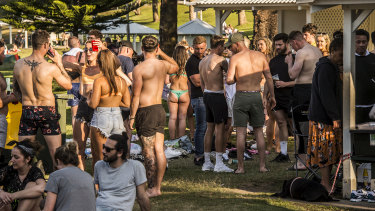 NSW Health urged people to stay home from the beach if they felt unwell and to get tested if they had any coronavirus symptoms, as temperatures reached 25 degrees on Sydney's coast and 31 degrees in the west.

The sunny spell was among the first tests for beachgoers and local authorities who are grappling with how to balance large crowds over summer with physical distancing requirements due to the pandemic.

Former New Jersey Governor Chris Christie announced on Saturday that he tested positive for COVID-19, the latest Trump administration insider to come down with the virus.

"I just received word that I am positive for COVID-19," he tweeted on Saturday. "I want to thank all of my friends and colleagues who have reached out to ask how I was feeling in the last day or two. I will be receiving medical attention today and will keep the necessary folks apprised of my condition." 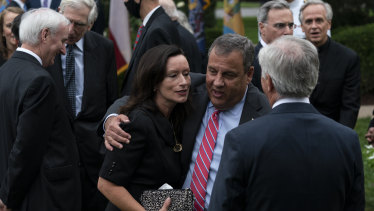 Chris Christie speaks with others after President Donald Trump announces Judge Amy Coney Barrett as his nominee to the Supreme Court.Credit:

Christie played the role of Joe Biden in debate preparation for the president before last Tuesday's televised showdown between President Donald Trump and his Democratic challenger in Cleveland.

Washington: Donald Trump's doctor has triggered widespread confusion by saying that the US President was diagnosed with coronavirus 36 hours before it was revealed to the public, forcing the White House to quickly issue a correction.

The confusion only deepened when, moments after White House physician Sean Conley gave an optimistic account of the President's condition, a White House official told reporters that the President was "not on a clear path to a full recovery". 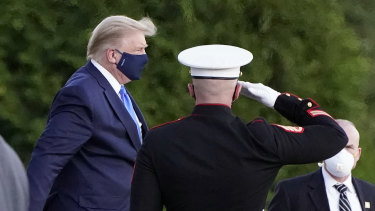 At a press briefing on Sunday (AEST) outside the Maryland hospital where Trump is being treated, White House physician Sean Conley said "we're 72 hours into [Trump's] diagnosis".

Given Conley was speaking at 11.30 am local time, this implied that Trump was diagnosed on Wednesday morning local time – the day after the presidential debate in Cleveland Ohio.

Trump did not reveal his diagnosis to the public until 1am Friday local time, 36 hours before Conley briefed the media outside Walter Reed Medical Centre.

Budget to splash $1 billion on wage subsidies for 100,000 apprentices

Employers will be given more than $1 billion in new subsidies to take on 100,000 apprentices in a federal budget plan to prevent an "explosion" in the number of young people with no work or skills.

The sweeping budget measure aims to fix a growing crisis as companies go broke or cut staff, putting thousands of apprentices out of work and creating a future skill shortage. 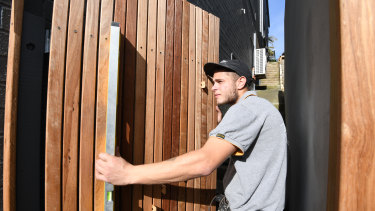 Jayden Fleischer is a fourth year carpentry apprentice who has lost jobs during COVID lockdown but has found another one to continue his apprenticeship.Credit:Peter Rae

The wage subsidy will be worth 50 per cent of salaries for new apprentices, in a bid to support 100,000 younger workers, and is worth at least $1 billion.

But the new spending may not be enough to make up for a fall in total investment in vocational education and training since the Coalition came to power in 2013.

Prime Minister Scott Morrison promised $1.5 billion in wage subsidies in July to keep existing apprentices in their jobs but has been fielding calls from industry for more help for new apprentices.

G'day all. It's Roy Ward here welcoming you to today's COVID-19 live blog.

Overnight we have had more news emerge as US President Donald Trump remains at Walter Reed Medical Centre in Washington following his positive diagnosis for the virus.

We will also have lots more Australian news today so please keep checking for updates and, as always, you can leave a comment on the blog or shoot me a tweet at @rpjward on Twitter.

Please enjoy the day to come.